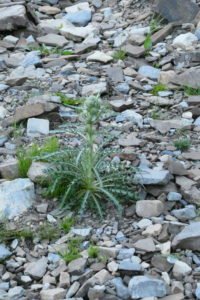 There are a lot of thistles in K-Country. The one that is most common, the Canada Thistle (with its purple flowers), is actually not native. It comes from Europe and Asia (despite its common name). Canada Thistle is introduced, invasive and designated a noxious weed in the province, and must be controlled under the Weed Control Act. The most commonly found native thistle is the White Thistle, Cirsium hookerianum.

Being a thistle, it’s easy to tell apart from other plants. But it has even more distinctive attributes that make it hard to miss. It’s well named, because it actually looks very white. It’s just COVERED in white prickles and hairs; even the flowers have spines. The smaller prickles are so dense and fine that Ben Gadd says it looks like it is covered in spider webs.

On the bright side, you don’t see a lot of it around. It does grow in a wide variety of habitats, so expect to see it in meadows, open forests or even up into the alpine. 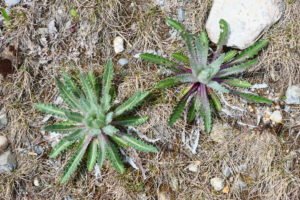 Young plants start as rosettes on the ground. Once they get bigger, they put out a whiteish-brown flower. And they can get big, growing up to 1.5 m tall.

While the thorns, prickles and hairs all hurt, it’s not poisonous. Just very, very spiny. We wouldn’t recommend touching it!

Find out about more of the plants of K-Country here!