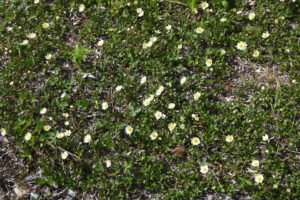 Just like their cousins the Yellow Mountain Avens, White Mountain Avens (Dryas hookeriana) carpet stoney places in K-Country. They love limestone soils where nothing else will grow. There, they form broad blankets, and fix the nitrogen enabling other plants to grow in over time. And White Mountain Avens particularly like high alpine places.

They are a member of the rose family. They used to be known by the Latin name Dryas octopetela. However, in recent years, that’s been assigned to the European species. So now, the North American varieties are considered a subspecies, D. octopetela ssp. hookeriana. I don’t think they care.

Dryas octopetela are a circumpolar arctic species They’re found in Scandinavia, Iceland, the Alps, Carpathian Mountains, Balkans, Caucasus and even the mountains of England, Scotland and Wales. It’s even the official flower of the Northwest Territories and the national flower of Iceland. 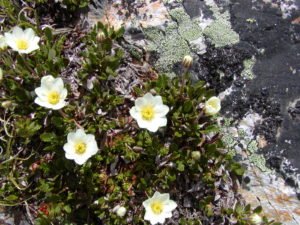 Dryas mats are remarkably resilient, but the flowers are not. Step on them, and they generally die. The leaves and the plant itself, though, can withstand challenging temperatures and conditions. They are remarkably well adapted for an arctic life. They hug the ground, minimizing moisture loss from the wind. The leaves are evergreen, and can photosynthesize even in mid winter if exposed to sun. The thick leaves resist moisture loss, and contain a bit of “plant antifreeze”. The flower forms a parabola, focusing the sun’s energy on the stamen. This enables fast seed development.

Much like their Yellow cousins, the flower turns into a twisted plume of a seed-head. These will eventually expand and look like a dandelion. The seeds scatter on the wind. We’ve never had much success collecting the seeds and getting them to grow. However, nurseries sell similar European species for rock gardens.