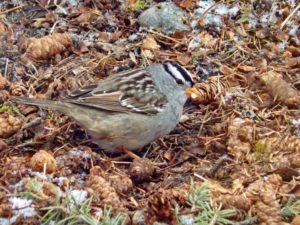 The White-Crowned Sparrow, Zonotrichia leucophrys, with its distinctive white head stripes, are one of the few sparrows that is easy to identify. Most other sparrows are, to us, just little brown things. White-Crowns are distinctive.

White-Crowns are common all over the province, but we think that they especially stand out in K-Country’s environs. There are even some hardy ones that will over-winter here.

You’ll often find them in small flocks. They are ground nesters, rarely nesting more than a foot above terra firma. White-Crowns really like mossy and bushy places to nest. That describes a whole lot of K-Country’s forests. They feed on the ground, going after seeds and bugs. But they’re also fans of catkins and even mosses themselves. 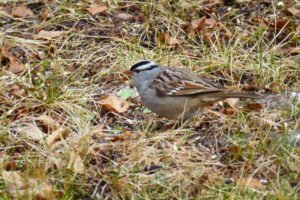 When it’s time to sing – and they LOVE to sing, especially in the spring – they head up to the tops of the highest trees. There are slight variations in the songs of the 5 major subspecies. These differences have been extensively studied.

White-Crowns have also been studied for their ability to put half their brain to sleep for up to 2 weeks while migrating. Referred to as “unihemispheric slow-wave sleep“, it’s an ability shared with a diverse but select group of animals including Beluga Whales, Northern Fur Seals, Amazonian Manatees, domestic Chickens and Mallards.