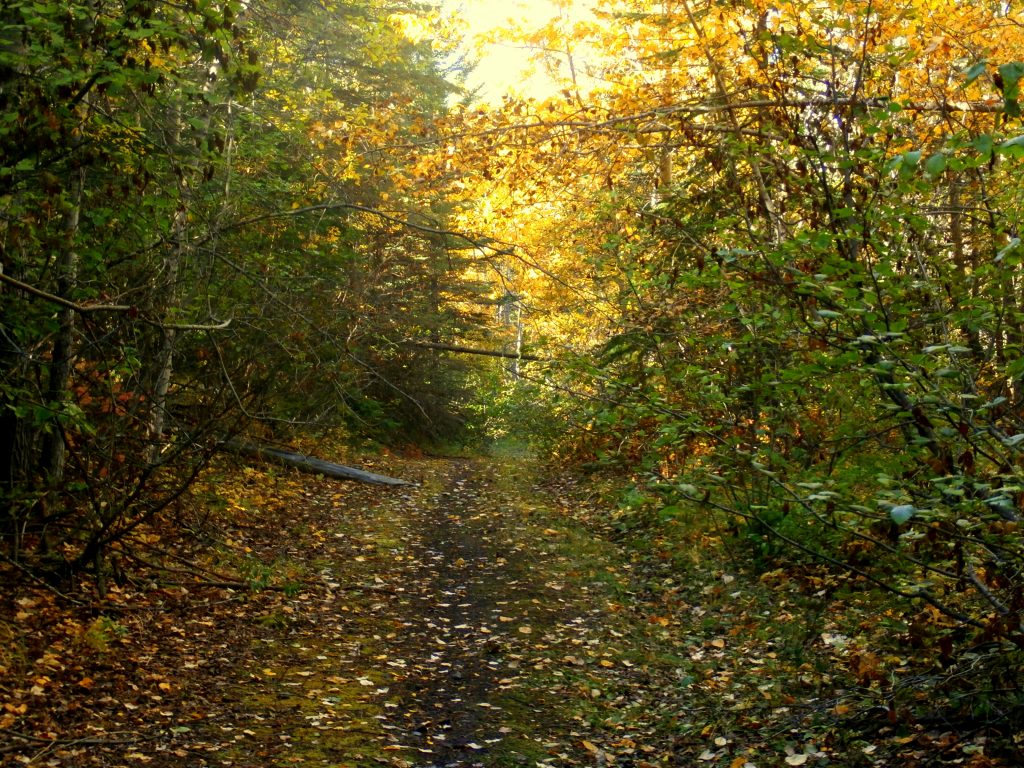 You walk them, but understand: Not all paths in the forest are created equal.

What is a Trail? 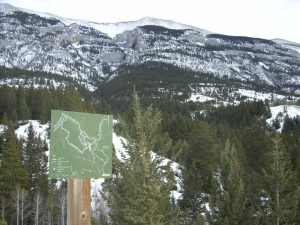 A “Trail” is, by Alberta Parks’ definition, officially recognized. It is maintained by Parks (sometimes with our help), and was built by Alberta
Environment and Parks (or someone else, with Parks’ specific permission or oversight) to Parks’ standards. Trails that were damaged by the 2013 flooding were rebuilt, re-aligned to prevent future flooding, and had debris moved off them. Trails normally have designated parking lots for them (Quaite is just one notable exception, sort of), often have washrooms, are signposted with route maps as shown in the photo at least at the trailhead and along the way at various official trail junctions. They are inspected annually by Parks staff, visited regularly by Conservation Officers, and even occasionally get Parks Interpreter Staff on them to help trail users learn about the trail’s environment. 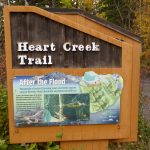 Some even have detailed interpretive signage on them (and these are called the “Interpretive Trail” network). Trails have designated and approved uses: hiking and/or biking and/or horseback riding and/or skiing and/or snowshoeing. Trails are built and maintained with the approved use in mind.

What else is there?

According to Alberta Parks, anything not described above is a “Route” or, occasionally, “Rogue Trail”.

Lots of Routes exist. Some very popular walks in K-Country (like Sparrowhawk Tarns, Tent Ridge or Pocaterra Ridge) are routes. But routes are really unlike trails, despite both being paths in the woods. Routes:

Two routes are a bit unique: they’re marked. Kananaskis Public Safety did so many rescues on the Heart Mountain Horseshoe and Yamnuska Traverse from people getting off-route that portions were marked (and it successfully helped reduce rescue calls). On Heart, the climbing route up the cliff crux is marked. On Yamnuska, not only is almost the entire rock scramble traverse from Raven’s End to the Saddle blazed with blue markings, but the chain was installed as a “safer” way to cross the “fall and you will die” ledge. There are no plans to mark more routes.

What makes a “route” different? 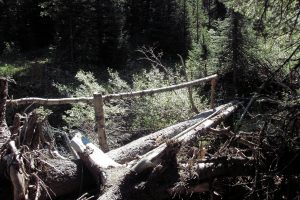 About the only thing Routes share in common with Trails is both get visits from Conservation Officers (who really, truly, go everywhere). Routes that were damaged by the floods of 2013 were left as is. Some popular but damaged routes were relocated by the footsteps of thousands who continued to go there anyway despite any flood damage. A good example is access to Running Rain Lake, a popular fishing lake with no official trail leading to it. Industrious fishermen just figured out a way around the flood damage, adapted fallen trees to use as “interesting” bridges (that would make Parks’ staff shudder; pictured above right) and a new route was born. Some routes (like Ha Ling) are occasionally adopted by Parks and, through the process noted below, become Trails. Razor’s Edge will be adopted once we are finished building it. 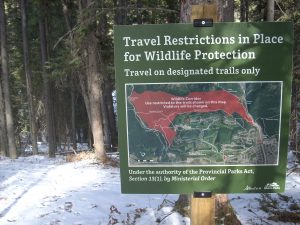 A “Rogue Trail” is a Parks term for a route that doesn’t belong. As is fully explained here, the Parks Act permits you to walk on foot anywhere you want except where you are specifically prohibited from doing so. Permanent, seasonal and temporary closures are put in place from time to time, and you can’t be in the closed space, much less have a trail there. In all Park spaces, it’s illegal to disturb vegetation to build a trail unless you have a permit, as described here (the Friends has permits for all the work we do). On top of that, Park Management Plans designate some areas in K-Country as “no go” zones, where trail development is actively discouraged (see a map of the Ecologically Sensitive Areas from Trail Planning in K-Country here). So even though you can walk (almost) anywhere you want, in some spaces even “leaving only footprints” is doing too much ecological damage. 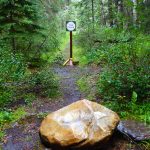 Parks therefore closes and reclaims “Rogue” trails, or at the very least, signs them or makes them difficult to find or follow. The pretty fall photo at the top of this page is of an old exploration road in a closed, designated wildlife corridor — which, despite being in a permanently closed area, still sees substantial human use.

Where does all this apply?

All of the above is true on Park land, but also (mostly) true on non-Park land, such as in the various Public Land Use Zones (PLUZs) in K-Country. We’re not aware of any Rogue Trails in the PLUZ spaces, but it wouldn’t surprise us that some exist. Our friends who spend a bunch of time on trail development in the Bragg Creek area in the PLUZ (including Moose Mountain Bike Trail Society, Greater Bragg Creek Trails Association, and others) all have spent a LOT of time developing and gaining approval for management plans for the spaces they play in, in partnerships with Alberta Environment and Parks and others. Those approved plans result in official designated trails, in some cases with agreements so the maintenance load is shared with Parks.

How does a trail become a TRAIL?

The process by which a trail becomes official — whether through adoption of a route like Ha Ling, or through green-field creation, like the Highline or the High Rockies Trail — is thorough and detailed, and involves at least 2 committee reviews. The first is the Kananaskis Trails Advisory Group, or K-TAG. This is a committee chaired by Environment and Parks and made up of dozens of diverse user groups, representing biking, hiking, snowshoeing, skiing, horseback riding, hunting and other organizations and users. The Friends is a member of K-TAG, as is guidebook author (and Friends Advisory Committee member) Gillean Daffern. K-TAG meets a few times a year and often makes recommendations and suggestions to Parks regarding trail development. For instance, a few years ago, K-TAG recommended that 3 of the routes in the Canmore area (Ha Ling, Lady Mac and Grotto) become official and get much needed maintenance. The first two have been, but the ACC Grotto Route has not.

K-TAG’s recommendations are then taken to the Kananaskis Trails Committee (“KTC”). KTC is made up of various departments of Government including Parks, plus Heritage and others. Former Friends Board Member Duane Fizor currently chairs the KTC. The Friends, by way of our cooperating agreement, sit on KTC. We are the only non-Government body to do so. KTC stewards trail proposals through the necessary planning and approval processes, ecological and heritage reviews, safety and engineering analyses and budgeting reviews, to enable work to be done. 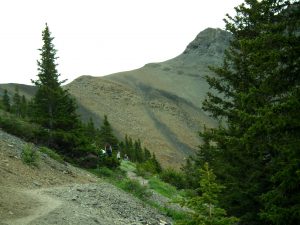 Once KTC has approved a trail’s plan, the trail is then “handed over” to Parks operation staff. They start the processes of maintenance and/or construction. For instance, the popular but previously unofficial Ha Ling route became official in 2015, was shut and completely rebuilt in 2017 making the trail safer and more sustainable (the picture is of the original route). But… the official part ends at treeline. From there, you remain on your own.

There are some 1,200 km of official trails in K-Country, and probably another 2,000 km of routes (though no one other than Gillean Daffern really knows how many). Only occasionally will you find the Friends talking about Routes. When we use the word “Trail”, we’re using it in the context of Alberta Parks definition. And we will probably never have volunteer projects for you on anything but trails. We work with Parks, and since Parks won’t work on routes, neither will we.