We all want to play safe in K-Country, and in this series of articles, we’re going to cover the basics of how to have a great day out there.

This series is being produced with the support of Kananaskis Public Safety, and in particular, thanks to Morgen Funston of KPS for her wisdom and suggestions.

The previous four pages in this series have been about preparedness; being ready with a plan for what you want to do, knowing how long it will take, what to wear while you’re doing it, what to carry with you, and how to keep your energy up while you are out there. But when you’re finally on your adventure, there are things you can do through your day to help keep yourself safe.

Top of the list is to always have SITUATIONAL AWARENESS. Our natural tendency is to become a bit complacent, especially when we’re out with our buddies having fun. But there are lots of things to be aware of that will help you get home safely. 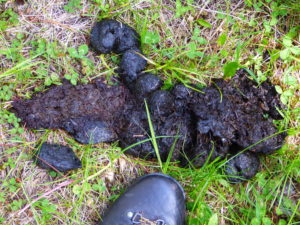 Watch for BEAR SIGNS. This includes fresh scat, fresh digs, recent scratching on trees, and even ravens that seem bothered by something.  Wildlife Ambassadors tell the story of doing wildlife awareness work on a trail right next to some fresh bear scat. About one-third of the hikers didn’t even notice it. One-third saw it but didn’t know what it was. The final third (the group you want to be a part of) not only noticed it but tried to figure out what it could tell them about what bears were eating, and how recently they were there.

In bear country, be particularly vigilant when THINGS CHANGE on the trail. Going from the forest to a meadow, or vice versa? Yell “Yo bear!” Does the trail now take you next to a loud creek. Yell “Yo, bear!” louder and more frequently. Suddenly walking through a sea of cow parsnip or other bear food? Yell “Yo, bear!” Find some fresh bear scat, or a freshly ripped up log? Yell “Yo, bear!” Making noise regularly is a good thing; making it when the bear is potentially nearby is essential.

Watch for WEATHER CHANGES. Are the clouds building into a thunderstorm? Is the light dropping because the clouds are getting thicker? Can you see rain in the distance heading your way? Did the wind just pick up suddenly? All of these and more suggest your once beautiful day is turning not so beautiful, and may encourage you to re-think or even abort your plan for the day.

All rivers you can paddle get seasonal water level changes, which can make an easy day you had last fall much harder in mid-summer. Be aware of WATER DEPTH and VELOCITY. Paddlers get the mantra “If in doubt, scout” drilled into their heads for a reason.

Recent rains can make that dry trail you biked last week muddy and treacherous this week. What can you look for to assess conditions early in your ride that may cause you to ride differently today? 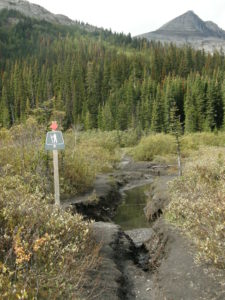 Heading to Burstall Pass, you’ll cross the outwash plain of the Robertson Glacier. It’s usually easy to creek-hop them in the morning on your way out, as the photo to the right shows. However, the water level always rises dramatically in the afternoon. Think about any creeks you have to cross: what will they be like on the way back?

Going up vs coming down

Sometimes when we’re out hiking, it looks tempting to scramble up something. Always remember its EASIER TO GO UP THAN GO DOWN. Down-climbing is difficult at best, and downright treacherous if you can’t see the footholds below you. 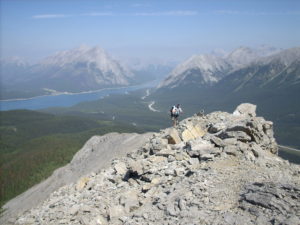 The Heart Creek Horseshoe scramble, for instance, is always done counter-clockwise to avoid down-climbing a sheer rock face. The Tent Horseshoe, pictured at right, is done clockwise for the same reasons.

Far more rescues result from people descending than ascending (on a bike, too). We often see people struggling to get down after having climbed something, often trying to do it with their backs to the slope, which usually doesn’t end well. Even seemingly benign spots like the waterfall in Grotto Canyon see incidents because people who climb up have trouble coming down. Not going up in the first place is safer than not being able to get down.

Never forget that TURNING BACK is always an option – and “back” is sometimes “up”. On a scramble of Cascade Mountain in Banff years ago, we got confused on the route down. We had to re-climb 150 m of descent to get to where we should have been – but continuing on the wrong path would have cliffed us out in a spot several people have died. 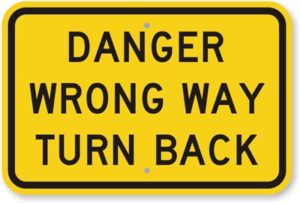 Continuing down if you’re off route – in the hope things will get better – rarely ends well. We have lost track of the number of summits we have “nearly made” but didn’t because we turned back. Noted adventurer Will Gadd says he turns back almost half the time on things he tries. And in case you haven’t noticed, you won’t ever find the sign to the right anywhere in K-Country. You have to make that judgement yourself.

Try perfecting the art of bailing.

Work as a team

Always monitor how you and anyone you’re with is doing, and act accordingly. It’s rare to have riding, hiking, skiing or paddling partners that are exactly your ability and have the exact same risk tolerance. They may be faster, slower, in better shape, out of shape, need more or fewer breaks, or any of a myriad of other things. So when you’re out with your buddies, WORK AS A TEAM:

Research clearly shows team decisions are always better than those of the individuals, so always work together.

Look up AND look down

There are a number of places in Kananaskis where route options are plentiful, so you need to know WHICH TRAIL to take at intersections, or above tree line – both coming and going. If “two roads diverge in the woods”, do you really want to take the one “less travelled by?” If you’re on a less travelled path, double down your efforts to look back while you’re heading up, so that you can stay on route on your way back down. This is especially important for scramblers, with a significant number of rescues caused by people going off-route on a descent.

Keep your head in the game

A key focus should be NOT TO MAKE A BAD SITUATION WORSE by your actions. Public Safety is full of stories of people who, in their haste to get out of a problem situation, make poor choices that make things worse.

If stuff is going south, follow the advice in the previous page: STOP. SIT. SNACK. SIP. Work with your team to come up with a solution. Dip into your emergency kits for warmth, or sustenance, or light, or tools, or information that can help you make better decisions. Haste, or a singular focus on bagging that summit or doing that whole ride, may end very badly indeed.

Be aware of things going wrong

In safety in industry, in aviation safety, and in other fields, a good rule of thumb is that “People don’t die because something went wrong”. One thing going wrong is an “oops”. Two things is usually a near miss. Three is broken stuff. Four is broken people. More than four gets very serious indeed. The challenge is some of those things that can go wrong (like the weather) aren’t in your control.

The goal is to CONTROL THE RISKS YOU CAN CONTROL, and BE PREPARED FOR THOSE YOU CAN’T. Don’t let your “oops” turn into a rescue.

But sometimes (to quote Robert Burns), even “the best laid plans of mice and men go oft awry”. In the last in this series on the next page, we’ll tell you what to do if you need Kananaskis Public Safety to get you out of the trouble you’re in.

<– Back to What to Eat to keep your energy up

To see how situational awareness changes in the winter, head here –>

Onward to What to Do when you’re really in trouble –>