On this page, we started this series by helping you understand what the good and smart folks at Environment Canada are doing when they generate weather forecasts. We promised then to come back to talk about the issue of what you can see on weather radar.

Two radars to choose from

EnviroCan’s weather radar serves many purposes, but it is primarily tuned to support aviation. They look up, because that’s where planes are. EnviroCan’s radar doesn’t really look across, where you are. They also don’t look across because there are mountains in the way. Mountains can mess with radar, giving false returns.

There is a company that looks across and cares a LOT about what hits the ground: Weather Modification Inc. Their radar is specifically tuned to manage the mountains. 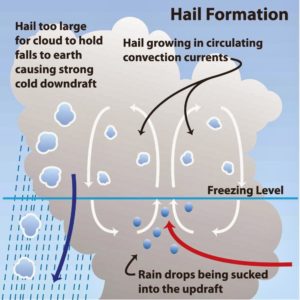 WeatherMod’s technique is to fill the sky with dust particles (silver iodide or CO2 pellets) dropped from airplanes. These particles will make tons of little rain, that will become tons of little hail bits — instead of letting just a few hail collect all the moisture and grow bigger. This prevents just a few droplets from turning into BIG hail, and instead makes a ton of little hail that’s annoying but doesn’t break things like roofs, windshields or crops.

WeatherMod tunes their radar to look at what’s hitting the ground. They couple this wth EnviroCan’s radar that looks up, and they know where to send their cloud seeding planes.

Comparing what they see

For fun, in 2013, on a nice June afternoon with the sky full of thunderstorms, we grabbed sample images to look at the difference between the two radar images. We thought it would be a great day to show the difference between the weather radar image focused on air traffic that EnviroCan generates, versus the commercial weather radar image targeting forecasting ground precipitation and hail forecasting, from WeatherModification. 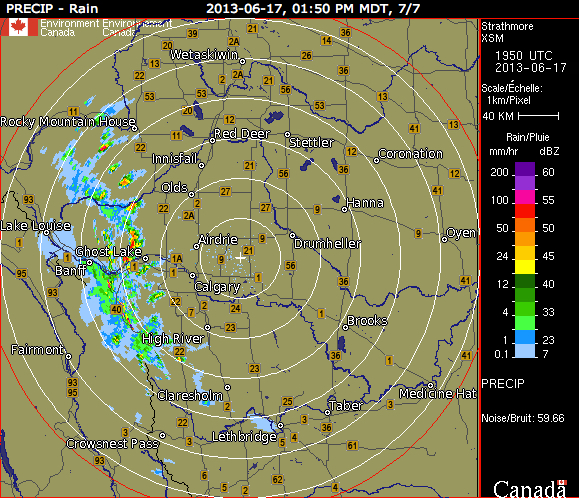 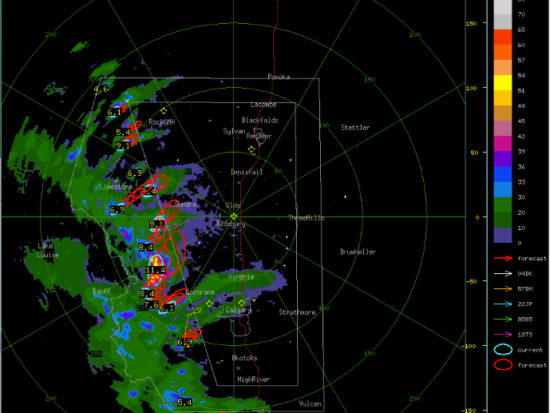 Note they are a mere 2 minutes apart, so represent the same moment in time. WeatherMod’s pictures show info they need to suppress hail, such as cloud tops (in metres; that 11.4 sucker is a cloud 37,400’ tall), storm direction and speed (the red circles) so the display is busier. We turned on all the geographic reference features on the EnviroCan display. Clearly they offer better reference points than WeatherMod. But both show precipitation density on a colour scale.

How are they different?

Here’s some differences in the information they are showing:

All of this is also true in the winter. So when you skiers look at the EnviroCan radar image to see where it’s snowing, take it with a grain of salt. EnviroCan sees what they want to see, and what they want to see isn’t necessarily what skiers want to see. Note that WeatherMod’s radar only runs during hail season, from April to late September.

The only downside to radar data is that it needs to be looked at in real time. This is why EnviroCan offers only 1 hr and 3 hr histories, and why WeatherMod just gives you the last 30 min. With limited cell coverage in K-Country, checking the radar may not be possible. Mostly, we look at it during storm events if we’re planning to go out the next day. It will tell us:

That info helps in your day planning.

<– Back to how to get a good weather forecast

Onward to looking at temperature change with elevation –>