There is not a person who visits Kananaskis who has not at some point noticed Usnea growing around them. The more common names for this lichen are Old Man’s Beard, Bearded Lichen, Sugared Beard, or Sugary Beard, and it is often confused with Spanish Moss which doesn’t grow here (Spanish Moss a native of more tropical climes). Usnea is a delicate looking, light green-gray hair that grows on live or dead trees, most commonly conifers and especially on Douglas Firs – but it also likes fences. 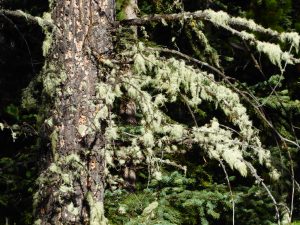 Usnea does not harm the tree it grows on in any way, and it does not gain nutrients from the tree. It just uses the tree as a convenient place to hang on and do its photosynthesis thing. Because it actually has a root ball that wedges into the bark, it is not a true epiphyte, though.

Usnea isn’t technically a plant. They are in fact “fruticose lichen”, a symbiosis of fungi (like a mushroom), and green algae. The fungi is the outside part; the fungi grow a hollow compartment and they farm algae that grows inside inside them. The fungus cell structure contains no cellulose, which plants have, making them not plants. For cell walls, they have the same material that lobsters and insects (and trilobites, for that matter) have for their exoskeleton — chitin. The byproducts of the algae’s photosynthesis is food for the fungi; the fungi provide a protected space for the algae to grow. Symbiosis. 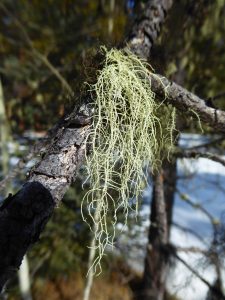 Usnea grow in little masses and can reproduce in several ways: fragmentation, asexual or sexual reproduction. They generally grow very slowly, but like the air they grow in to be clean. High sulphur dioxide levels in particular dramatically retard their growth, and so if you see long Usnea in a tree like the 3″ long one in the photo, you know you’re breathing really clean air.

Gently pull on an Usnea strand and you’ll find it a bit elastic, not brittle, and when it finally comes apart, you’ll see a fine cord about the width of human hair running up the middle of each stem.

Usena grow INCREDIBLY slowly; less than 1 mm every DECADE. Usnea often outlive the trees they grow on, and if you see an usnea that’s 5″ long, it’s on the order of 200 years old. Usenea have been use to date the old dead trees they live on. 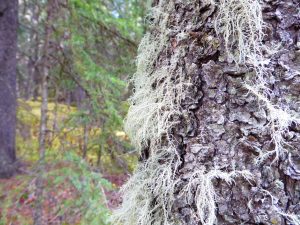 Usnea prefer generally less humid forests, and our observation is that they are more prevalent on the moister north sides of the trees they live on in the K-Country forests. Globally, there are over 400 sub- species of Usnea. Some strains of Usnea have anti-bacterial properties, and others are used to make dyes; it makes a great firestarter, and they can be used as an emergency dressing for wounds. Deer and elk eat usnea, and many birds use it for nesting material. However, there’s no evidence that Indigenous Canadians used this lichen for anything.

See more of the fascinating lichens and fungi of Kananaskis Country here!