As we note here in our article on Fortress, the designated Provincial Parks in Kananaskis are full of “holes”.

These holes are mostly leased public lands that were held under some kind of disposition prior to the designation of the Parks that now surround them, like Fortress. The Public Lands folks, not Alberta Parks, manage the Crown lands not designated as Provincial Parks. each hole has its own story.

Besides Fortress, the Burns property is possibly the most significant hole in K-Country. Unlike Fortress, it is fully private property, not leased Crown land, making it very unique in K-Country. The freehold ownership of the property precedes not just the 1977 creation of K-Country, but also the creation of the Province of Alberta in 1905. Because it is freehold land, the Burns property is not managed by public land authorities. 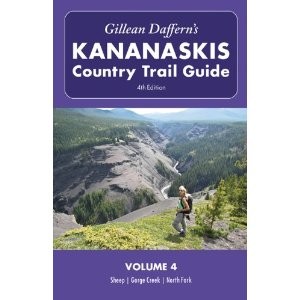 The Burns property is in a very remote location, and is surrounded by Elbow-Sheep Wildland Provincial Park (“ESWPP”). It’s in the upper section of the headwaters of the Sheep River. The closest road access is more than 7 km from the property’s east boundary. Because of its remoteness, it’s not something that a lot of people have seen, have been to, or even pay much attention to.

However, if you’re a backpacker, bike-packer or equestrian heading up the Sheep River towards Tombstone, or up Mist Creek and over Rickert’s Pass, you’re going to run into it. And you need to understand it, because it’s private land – and there’s no way to not cross it. It runs from mountainside to mountainside across the Sheep River valley. 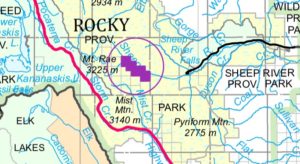 The map to the right shows its exact location; the circled purple land is the property. It’s north and east of Hwy 40, directly east of the Highwood Pass on the other side of the mountains of the Misty Range such as Mt. Rae, Arethusa and Storm Mountain. The property is almost due north of the Mist Creek Day Use Area on Hwy 40, up the Mist Creek Valley. Head up Mist Creek, drop over Rickertt’s Pass, and you’re there. It’s almost due west from the Junction Creek Day Use Area in Sheep River Provincial Park, straight up the Sheep River.

It’s owned by P. Burns Coal Mines Limited (“Burns Limited”), which is wholly owned by the Burns Family. If you don’t think you know of the Burns family, you’re probably wrong. 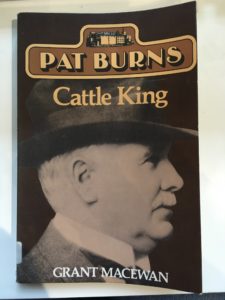 Patrick Burns, the patriarch of the family, came to the west from Ontario in 1878. By the early 1900’s he was running several ranches, Calgary’s main slaughterhouse, and was one of the “Big Four” ranchers to start the Calgary Stampede. His ranches were so extensive that he could travel from Cochrane to the US border without stepping off his property. One of his ranches was the famous Bar U.

He was appointed to the Canadian Senate in 1931 on his 75th birthday. Burns was philanthropic, founding several charities, mostly focused on children. In 2008, the Calgary Herald named him Alberta’s Greatest Citizen of all time. He has at least 8 buildings (in 3 different cities), a mountain, a lake, 3 neighbourhoods and 4 roads named after him. His former house sits in Fish Creek Provincial Park. You may have eaten in it; it’s home to the Bow Valley Ranch Restaurant. You can read about Pat Burns a bit more here or here.

When was the property acquired?

George Dawson found coal in the area when he crossed what is today Rickert’s Pass in 1884. Geologist Julius Rickert, for whom Rickert’s Pass is named, prospected for coal in the area in 1886 and purchased the property and its mineral rights in 1903 from the Territorial Government. At that time, the land was still in the “Postal District of Alberta, North West Territories” because the Province of Alberta did not yet exist. According to Grant MacEwan, author of “Pat Burns, Cattle King”, Burns purchased the Sheep Valley property including the mineral rights on March 18, 1911 from Rickert, for the sum of $50,000 (about $1,150,000 in 2021 dollars).

Coal development on the property

Patrick Burns fully intended to develop the coal on the property, according to Grant McEwan (he had other mines in British Columbia). He got a charter for a railway, Calgary and South Western, which was built to at least Junction Creek. The current Sheep Trail road follows the old railway’s path. A road was constructed to the property (which eventually became the Sheep Fire Road), and a “town” was created on the property. A coal mine was built, and it operated through until 1923. Initial geological estimates said there was “14 million tons of mineable anthracite coal” on the property. 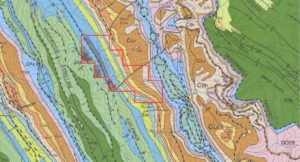 At right is a geology map showing the property and the various geological zones. The areas shaded are the coal bearing formations. The mine location is marked “M”.

You can note it’s a VERY large chunk of land. For this you can thank the Dominion Land Survey System, where the section, half section and quarter section boundaries that delineate the land just happen to result in a big plot.

Gillean states that the mine was re-opened in 1945 for a few years, but Dennis wasn’t able to confirm that. 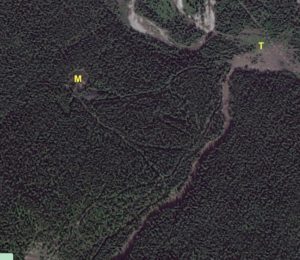 In the early 1960’s the Alberta Forest Service ordered the “town” to be reclaimed — without the permission of Burns Limited. No evidence of it remains, but as you can see in the photo to the right from Google Earth, the evidence on the property of the mine still remains. The “town” existed in the cleared area at the top right of the image (marked “T”), the mine is at centre left (marked “M), and the routes up to the mine for both horses and tramcars are still visible. Gillean offers a “guided tour” of the old mine workings on page 116 of her guidebook.

How does the property affect recreation? 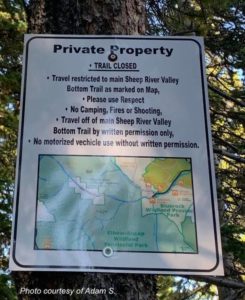 This land is private property but surrounded by Elbow-Sheep Wildland Provincial Park, which was established in 1996 (85 years after Burns bought the land from Rickert). That has created a conundrum for years regarding whether or not the public can cross the property on the historic Sheep Trail connecting Junction Creek and Tombstone. Rest assured, there is no way around the property, and there never will be a viable trail that goes, for instance, south of Mt. Gibraltar to avoid the property. This has led some recreationalists to avoid the area entirely to avoid trespassing, whereas others ignore the Private Property signs and just hope they don’t get caught or in trouble. You’ll find the sign to the right in two places:

We suspect there may have been a sign on the east side of the property at some point, too, but we can confirm it is no longer there as of 2021.

The ESWPP Management Plan, last updated in 1998, states: “There presently is an informal understanding to allow for government and public access across the private property. Opportunities for transferring these lands to the provincial government or for the establishment of a conservation easement will be explored.”

Dennis would not comment on any talks related to the latter issue. As to the former issue, the “informal understanding” for access, he had this message from Burns Limited he asked that we pass on:

“Really no protocol exists for visiting the property, other than to go at your own risk. Especially, since the 2013 flood washed out most of the paths, which haven’t been repaired except on Crown Lands. It is Private Property, so people should not be cutting down trees, camping, leaving waste or lighting fires. If someone sees activities like this, helicopter landings from the tour company at the junction of Hwy 40 and the Trans Canada, or other activities that are dangerous, causing destruction or damage, we always appreciate being told.”

Still concerned? See something that the Burns Family should be aware of? Contact us at info@kananaskis.org, and we will connect you with them.

The property sees regular visitation from members of the Burns Family, on horseback and foot. 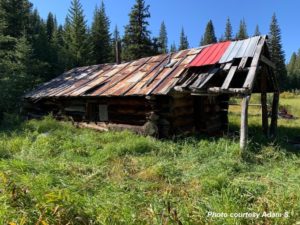 On the northwest side of the property sits an old cabin, which once upon a time, was open to backcountry users. Harry Denning built it in the 1940’s out of bits of the buildings from the coal-mining town. Denning was a fellow rancher and associate of Pat Burns. He owned the Bar XV Ranch in the Sheep River valley. He built the cabin as a backcountry base to manage range cattle from the ranch, which were run in the valley until the early 1970’s.

Dennis wasn’t even aware that the cabin was on the property. We were informed, however, that the cabin is unsafe to use due to its age and high use by the public over many years. The photo to the right is the cabin in the summer of 2021. It’s… a disintegrating mess. Other photos we have of the interior would suggest folks would be crazy to even consider using it (and they would be sharing it with several animals).

Or take a gander from the top of Gibraltar Mountain, which overlooks the property. The photo below is courtesy of Vern Dewit, avid scrambler. Proving he is in much better shape than us, he got to the top of Gibraltar by hiking the entire length of Mist Ridge, descending through the Mist-Gibraltar col, and then climbing Gibraltar (and coming out the same day).

What’s the future of the property?

An outstanding question for which there is no answer, and upon which Dennis could not comment. There have been rumours of many, many things, from attempting to develop the coal to selling the logging rights, but they are all just rumours.

Remember that the property is landlocked and surrounded by a Provincial Park. The ESWPP Management Plan states “The (private property) owner is authorized to use vehicle access from the Junction Creek Day Use area up the existing trail to his property”

Whether permission for industrial traffic though a Wildland Park to the property could be secured is unknown. Those who have been up there know the trail is a mess past the first bridge; that was the end of the repairs after the 2013 flood. There remain 3 unbridged crossings of the Sheep River upstream of the bridge.

We could actually see an awesome opportunity for a summer backcountry lodge operation like Skoki, Mt. Assiniboine, Shadow Lake or others. It seems ideally suited; a great and isolated location, many day hiking opportunities, and a perfect day-hike distance in. But that’s just us. We are often asked why there are no backcountry lodges in K-Country (a topic for a different page). The Friends would be open to help with trail maintenance on the Sheep Trail and other trails in the area.

If you head up that way backpacking or on horseback, remember it is private land. Be respectful of the property, don’t camp there, take nothing but photos, and understand you’re wandering on an interesting piece of Alberta history.

We want to again acknowledge the willingness of Dennis Burns of the Burns family to talk with us about this property. We also want to thank Vern Dewit for use of his photo.

Learn more about other elements of Kananaskis Country here!