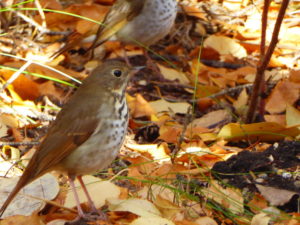 When you think of thrushes, the omnipresent Robin is the king of the family. But Robins have many cousins, including Hermit Thrush, Varied Thrush, and the Swainson’s Thrush, Catharus ustulatus.

Compared to the brightly coloured Varied Thrush, or the bright chested Robin, Swainson’s are rather… dull. Another name for them is the Olive-Backed Thrush. They are a pure dull olive green on their backs, with a buff chest that has spots. Fledglings are very spotted. As they moult, the numbers of chest spots decreases. 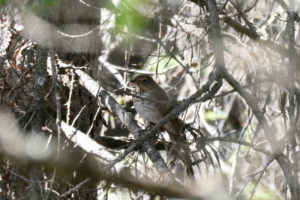 Swainson’s are fairly shy and not often seen. They are primarily heard, basically the first bird to make noise in the morning and the last to stop at night. During summer it’s a tree dweller. In migration it becomes much more of a ground feeder, targeting more berries than its usual diet of beetles, flies, ants and caterpillars. It especially likes Red Osier Dogwood berries. You’ll most commonly see them in April/May and late August through early October. Swainson’s are often still around when the snows fly. 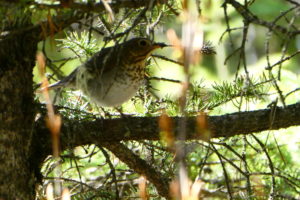 They nest in conifers not too far off the ground. Swainson’s lay eggs in the spring, and it takes just 25 days from laying to fledging. They spend their winters from southern Mexico all the way to northern Argentina. Their migration route is a bit unique and convoluted; they fly east, then south through Florida, before jumping to Panama then going south again.

According to Ben Gadd, numbers of these and other neotropical migrants are in steep decline due to habitat losses from forestry practices and other issues.

Meet some of the other cool critters of K-Country here!