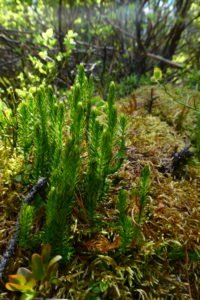 If you’re out in a moist K-Country forest, you can often find groves of what look like 3″ tall spruce trees. Except they’re not trees. You’ve found, Stiff Clubmoss, Lycopodium annotinum or Spinulum annotinum, one of the most ancient plants in the forest.

Stiff Clubmoss first appeared in Devonian times, some 400 million years ago, and have been unchanged since. They can be readily found in fossil records globally. Today, they’re found in cool forests around the world in the northern hemisphere including Canada, Europe, Asia and even Greenland.

You would be forgiven for confusing this with small trees. It actually produces tiny yellowish cones, though not for primary reproduction. It usually spreads like Strawberries, sending runners out along the ground, so often forms small mats. However, the cones do produce dust-like spores, and humans have found uses for them. 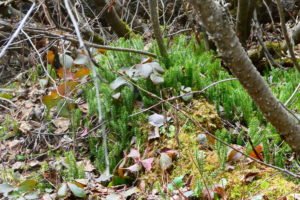 The spores are high in oil and readily flammable. Collect them in bulk and they are referred to as Lycopodium Powder. This is commonly used in scientific experiments and stage theatrics to create dust explosions or balls of flame. In addition, it has numerous other scientific uses which you can read about here.

The Cree used Lycopodium powder to foretell whether sick people would live or die. The spores are highly hydrophobic so sit on water. If the sick person spread the powder on water, and the powder moved towards the sun, the person would survive.

Find out about other fascinating plants of K-Country here!