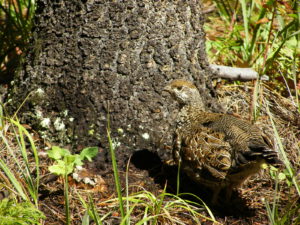 If ever an animal believed that camouflage was the answer for everything, it is the Spruce Grouse, Falcipennis canadensis (seen trying to blend in with a tree at right). Some use the term “unwary”; we think they verge on stupid. Run into one in a forest and they won’t move, nor fly away, nor run, and sometimes, they don’t even walk away. They are unperturbed by your presence, and appear to honestly believe they are invisible. Their nickname, after all, is “Fool’s Hen.” Now, they are in the same family as the domestic chicken and turkey (Galliformes). We understand those birds aren’t that smart either. 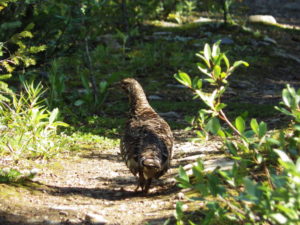 In any case, trying to find a Spruce Grouse when you want to is hard. But you seem to run into them on K-Country trails all the time from August onwards. We almost stepped on the one on the left on the Rummel Lake trail. A week later, in almost the same place, almost stepped on one a second time (perhaps it was the same bird).

Too many similar species

Field identification of members of the Grouse family can be tough. Spruce Grouse are very similar to the White Tailed Ptarmigan (at least when Ptarmigan are in their summer plumage), and their nearly identical (though much plainer and bluer) cousins the Dusky Grouse. They’re also similar to the Ruffed Grouse, but at least Ruffed ones have a head crest that distinguishes them. To make things even more confusing, Spruce Grouse come in two sub-forms: Franklin’s and Boreal. Franklin’s are the most common subspecies in K-Country. In the end, we take pictures of what we see and identify them at home. 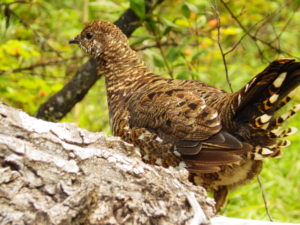 All birds in the Grouse group are brown and mottled – we think the pattern on a Ptarmigan looks like a snowflake — but they have different white patterns. Duskies are more a steely grey than Spruce Grouse brown colour. Ptarmigan are found up high in alpine meadows. Ruffed, Blue and Spruce Grouse are found lower in the forests. This isn’t unusual when you consider the Spruce Grouse’s favourite food is conifer needles. Yes, they will eat up to 10% of their body weight in green, live conifer needles each day. They store in their crops and digest them overnight. They are virtually the only animals that eat conifer needles. 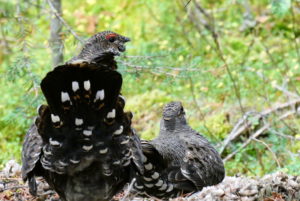 Males establish a territory and breed with as many females as they can entice in for a visit. They do so by giving the girls “the eye”. They have a red comb over their eye. When showing off, they can make it bigger and redder. They strut around with their necks puffed out and tails up in the air like a flag. Young of year males are basically fully grown by October. They start practicing their “come hither” moves on their moms; that’s what’s happening in the photo to the right. 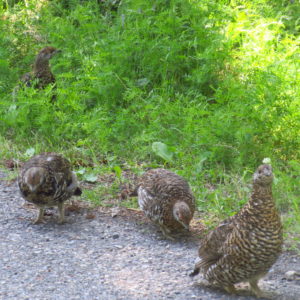 Females raise the chicks alone, and have 4-7 offspring who are “precocial” (your new word of the day). This means they are born mobile and almost mature and are able to walk at 8 hours old.

Walking is an important skill. These birds really don’t fly very much, preferring to walk around even when pursued. They even grow special extensions to their toes in the fall that are shed in the spring (called “pectinations” – your 2nd new word of the day!). These enable walking on snow. Ben Gadd says Ptarmigan are the only ones with feathered feet, but all grouse have some feathering on their legs and feet. 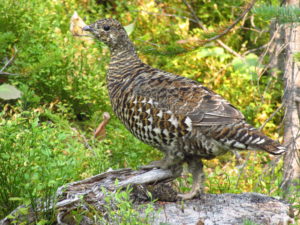 Spruce Grouse are non-migratory. Studies in Alberta have shown a significant percentage of females and some males do move between summer breeding sites and wintering sites. Their range extends from coast to coast to coast (northern Yukon), anywhere there are conifer trees. They are actively hunted; in the mountain areas, hunting is in every month from September to mid-June. In the foothills WMUs south of the TransCanada, it’s just September to November. We understand they taste like chicken.