One of the parts of K-Country that you can’t help but notice are the reservoirs. On other pages, we’ll talk about K-Country’s natural lakes (there really aren’t that many of them of consequential size). Here, we’ll be looking at the big lakes in K-Country: Upper and Lower Kananaskis Lakes, and Barrier Lake, all of which are hydro-electric reservoirs. 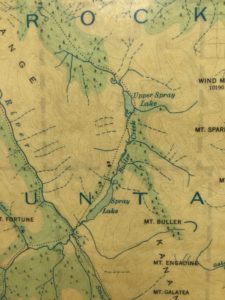 Spray Lake is the largest lake in Kananaskis Country. The views of the lake from various trails and viewpoints in the valley verge on iconic.

Originally, it was two lakes, Upper and Lower Spray Lakes. Lower ran from what is now Sparrowhawk Day-Use south to Canyon Dam area. Upper was a much smaller pond who’s north end was near the Spray West Campground. The photo to the right is of a 1914 topographic map. Note that the water originally flowed north to south in the valley through Buller Creek. Gap Lake never existed. 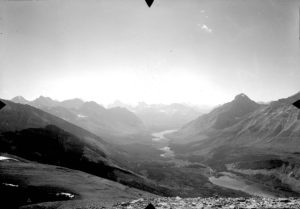 The photo to the right is from the surveyor David Nichols when he was surveying the area for the Department of Mines in 1916. It was sourced from the phenomenal Mountain Legacy Project. Photos from this work resulted in updated topographic mapping. Again, you can see that the lakes are much smaller and discontinuous.

Though identified for hydroelectric power potential in 1911, the lake as we know it today was formed by the construction of the Canyon Dam in the south and the Three Sisters Dam in the north in 1950. These dams increased the lake area to just under 20 square kilometers by increasing their level about 50 m. They flooded a 12 m waterfall that used to sit at the valley’s south end near Smuts Creek’s outfall. 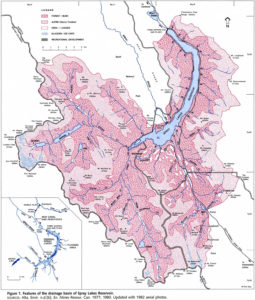 The lake’s maximum depth is 65 m, but from Spray West Campground to the Canyon Dam, the depth is a reasonably consistent at 50-60 m on the lake’s west side. The dams collect from a drainage basin of just under 500 square kilometres (outlined in pink in the map to the right). It includes a significant chunk of the southern portion of Banff National Park all the way to Mount Assiniboine and Marvel Lake. It also gets water south to Chester Lake and the Robertson Glacier in K-Country. The damming project included a small dam at the south end of Mud Lake (at the Burstall Pass trailhead) directing Burstall creek northwards, and a ditch that does the same with French Creek. 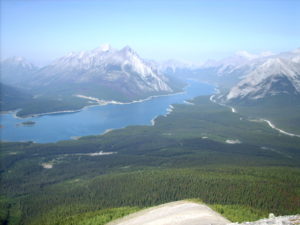 The reservoir is long and narrow like the valley it fills. The lake peaks at 21 km in length, but is only 1.6 km wide at its maximum. It feeds three power plants. The first is the Three Sisters plant, through a drop of 18 m. The water continues to the Spray and Rundle plants in Canmore via canals. There is no power plant at the Spray River/Canyon dam, just a water control structure. Until the 1970’s the majority of the water release from the reservoir was done in the winter for peak power demands, but water is now drawn throughout the year.

The story of fishing 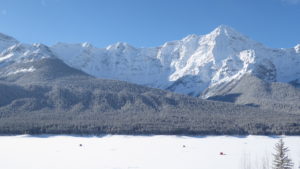 The lake has always been popular with fishermen, even though the road leading to the lake via the Canmore Hill that was built to construct the dams was only upgraded in the 1980’s. Pre-dams, the cutthroat and bull trout fishery in the original lakes and streams was considered very good, with some rainbow trout found as well below the waterfall near Smuts Creek. Unfortunately, as was predicted, the cutthroat trout catch in the reservoir quickly dwindled to zero after the dams were built. Cutthroat still can be found in the upper headwaters including Watridge Creek. Ice fishing is also popular; you can see a few ice fishing huts dotting the lake in the photo at right.

Fish introduction that worked (and didn’t) 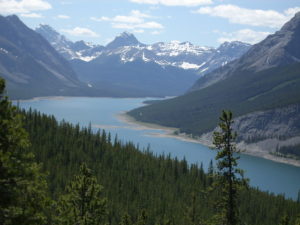 To rebuild the sport fishery in the reservoir, Fish and Wildlife Division introduced approximately 400,000 lake trout as eyed-eggs between 1951 and 1954. They brought in 6 million cisco eggs in 1953. Lake trout spawn successfully in the reservoir but numbers were still low in the early 1980s. From 1982 to 1986, Fish and Wildlife Division annually stocked 27,000 to 75,000 lake trout averaging 9.0 cm and by 1988, anglers reported excellent fishing for lake trout. The lake has been regularly stocked with rainbow trout since 1991.

The cisco were to have provided a stable food supply for the lake trout. They spawned successfully for a few years, but in 1986, no cisco under 23 years of age were caught, indicating that no successful spawning had occurred since about 1964. Since Cisco rarely live over 30 years, they have effectively now disappeared from the reservoir. 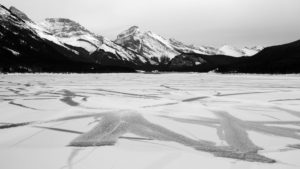 Mountain whitefish are abundant in the reservoir and reproduce successfully in the tributaries. They do not seem to be preyed upon by lake trout. The mountain whitefish population is largely made up of old fish; 50% of those caught in 1986 were over 10 years old. The oldest one caught was 29 years old; it may be the oldest fish of this species ever caught in North America.

How the Lake Trout survive 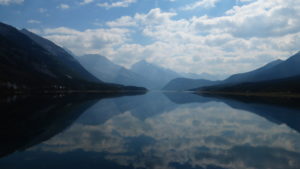 The lack of appropriate prey for lake trout in the reservoir has led them to survive almost exclusively on plankton and midge larvae (hint, hint, fishermen!). Only 2% of 51 fish caught in 1986 had fish in their stomachs. The scarcity of fish in the diet of lake trout is likely one reason why the lake trout in Spray Lakes Reservoir die younger and are smaller at all ages than lake trout in lakes with abundant forage fish such as Lake Minnewanka. In 1982, the lake was stocked with the same opossum shrimp that were introduced into Upper and Lower Kananaskis Lakes to enhance the trout food supplies.

Spray Lakes is popular with boats for fishing, less so with recreational boating due to the fairly constant winds that blow up the valley. Power boats are permitted. A boat launch is available at the Driftwood Day Use area. We’re always surprise some hardy, drysuit-wearing windsurfers don’t try the lake out. It’s popular with kayakers and canoeists, especially those who start at the north end and let the afternoon winds blow them back.

In the winter, dog sled companies use Driftwood as a staging area, and run trips up and down the east shoreline.

Find out more about the special places in K-Country here!