Kananaskis Country is more than just Provincial Parks and various protected areas. It also includes Crown Land, known as Provincial Land or Public Land. In order to manage this land, it tends to be sorted into different zones called Public Land Use Zones or PLUZs, which enable enhanced management – though Public Land doesn’t have to be in a “zone”. Throughout the province, there is a substantial amount of public land. To best manage K-Country’s public land, most of it is sorted into various zones, and each of these zones has it’s own management framework. 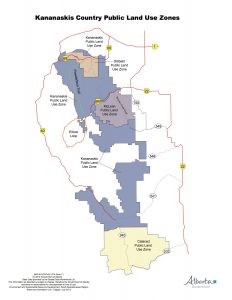 There are 4 PLUZs in K-Country, which you can see in the map to the right. Here you can read about the largest of these, the Kananaskis Country PLUZ (purple in the map); it’s in the northwest portion of the KC-PLUZ where the Friends has taken on primary management of designated trails in partnership with Public Lands. In this article, we’ll look at a PLUZ where the Friend also maintains the trails: the Sibbald Snow Vehicle PLUZ (“Sibbald SV-PLUZ”), which is the orange zone on the map.

So why create the Sibbald SV-PLUZ?

The Sibbald SV-PLUZ, along with Cataract, were created to define a space that would allow snow vehicle use. Snow machines are permitted on designated trails in the Sibbald SV-PLUZ from December 1st through March 31st. The designated trails are shown in blue on the map to the right. Snow vehicles (defined under the PLAR as “a motor vehicle designed and equipped to be driven exclusively or chiefly on snow or ice or both”) are the only vehicles you can ride in the PLUZ; other OHVs are not permitted. There are a bunch of rules in the PLAR about operating snow vehicles in a PLUZ including:

Note that, while the trails in the Sibbald SV-PLUZ are only open for snowmobiling until March 31st, snowmobiles may still ride on the Powderface Trail until April 30th as described here.

The snow pack is the Sibbald area is not great, generally. Accordingly, only three snowmobile trails are designated: The Blue Loop, the Blue ½ Loop, and the Red Trail. The only designated staging area is Dawson. None of the trails can be accessed by road from any other location.

How are the snowmobile trails maintained?

As we note on our page for the KC-PLUZ, these days, the Public Lands division of Alberta Environment and Parks has only a very small team working in the field as part of AEP’s ‘Recreation Management’ department. They handle recreation trails on all public land in all of southwestern Alberta. Accordingly, they develop partnerships (such as FKC) with AEP, which add resources to help stewards these areas. Whereas Cataract Creek SV-PLUZ has the Calgary Snowmobile Club as a trail maintenance partner, there is no current partner for the Sibbald snow machine trails. So, unlike the Cataract Creek, the Sibbald snow vehicle trails are not groomed. As a result, if the snowmobile trails need maintenance in the Sibbald SV-PLUZ, it’s usually done with the assistance of Alberta Park’s Bow Valley district trail crews. However, this assistance is limited to mostly just removing fallen trees.

Can non-snow machine users use the PLUZ?

If the PLUZ was created for snow machines, what about the rest of us? How does the PLUZ designation affect hikers, mountain bikers, logging or anything else for that matter? 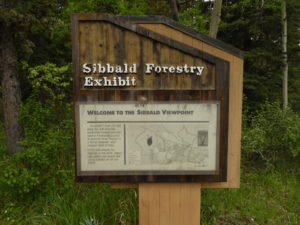 Simply put, Part C of the PLAR (which defines the Sibbald SV-PLUZ) permits snow machines and restrict them to designated trails. Everything else in the PLAR treats the area like all other Public Land – and our article on the KC-PLUZ went deep into what that means, so we will only summarize it (for details, go back to that article): 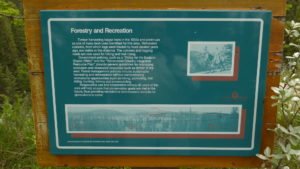 As with the other PLUZs in Kananaskis, there is active industrial activity and other dispositions. There are gas wells on the flanks of Moose Mountain, and the road to access them cuts through the Sibbald SV-PLUZ.

Logging has taken place for years along that well access road, and on the west side of the PLUZ, west of Powderface Trail. There is also logging in the northwest corner of the PLUZ, west of Powderface Trail and both south and north of Hwy 68. The Jumpingpound Forest Demonstration Loop explains all about logging in the area. In many cases, the official trails (including the snowmobile trails) follow old logging roads. On a tiny scale of logging, the Sibbald SV-PLUZ is also where you can go cut your own Christmas tree (with a permit).

Homestead Road is entirely in the PLUZ, and at its south end are several private gun clubs and shooting ranges. One range is managed by the Calgary-based Buffalo Target Shooters Association, another by the Rosebud Silhouette and Benchrest Club, another by the Swiss Rifle Club. These all sit in a single large commercial disposition area targeted for recreation.

What about trails for hikers & bikers?

As a hiker/biker/runner or other outdoor user, you’re more than welcome to use the snowmobile trails. In fact, the Red Trail shares a lot of its length with the Tom Snow hiking trail.

In the winter, it’s a bit different. You might think snowmobile packed trails could make nice cross-country ski or snowshoe tracks — but be abundantly clear that they are, first and foremost in the winter, trails for snow machines. Best to think of it as how you are permitted to walk on rural roads: stay out of the way of the cars, because on foot, you really don’t have any right of way. Snow machines travelling 20 km/hr can appear at any time on any designated trail. Please stay out of their way.

However, unlike Cataract, the Sibbald SV-PLUZ has many designated, official trails for non-motorized uses like hiking, biking or other activities. Note that all are designated as multi-use, and so are for hikers, bikers and equestrians. Starting in 2020, most of these trails are being maintained by the Friends of Kananaskis in our partnership with AEP. Much maintenance work is planned on them over the next few years. The official trails in the Sibbald SV-PLUZ are:

Routes in the Sibbald SV-PLUZ

In addition to the above list, the following are just SOME of the unofficial Routes in the Sibbald SV-PLUZ:

Camping, Facilities & Day Use in the PLUZ

Dawson, Pine Grove and Sibbald Lake Campgrounds are surrounded by the Sibbald SV-PLUZ, but each is it’s own Provincial Recreation Area, so aren’t technically a part of the PLUZ. Dawson is open all year round for camping (though it only has 5 sites). Pine Grove is for groups only.

The only camping within the Sibbald SV-PLUZ itself is random camping, which is permitted and is free (once you have the Kananaskis Conservation Pass necessary to visit K-Country). Check the link for random camping rules.

Crane Meadow remains a designated PRA, but has long been abandoned and no trace of it remains.