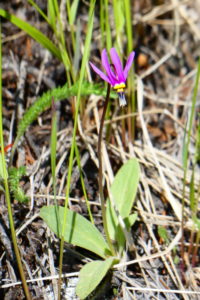 Shooting Stars, Dodecathon pulchellum, are a readily identifiable spring flower in K-Country. They typically bloom in late May and last until early July. They are fans of moister soils and spread easily. Supposedly, you can readily cultivate them at home, too.

There are 17 species of Shooting Star worldwide, growing in western North America and Siberia. Of these 17, two kinds of Shooting Stars are found here. Both has a few names – the Mountain (or Desert or Bonneville) and the Saline (or Darkthroat or Pretty). However, they are difficult to tell apart and equally common in K-Country. If you want to try, the easiest giveaway is that the Mountain variety has hairy leaves. Despite liking moisture, Shooting Stars tolerate drier soils, and so are common in high mountain meadows. 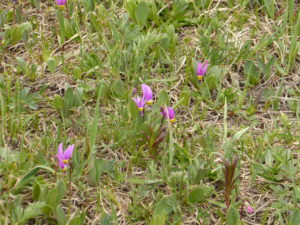 Both have distinctive flowers that look just like their Shooting Star name. The stamens and dark anthers stick forward and the purple petals pull back. Most anyone can identify them, as they look like they’re going fast. Their pollen is microscopic and released by just the vibration of the wings of nearby bees in a process called “buzz pollination”.

Indigenous people infused the roots and leaves in water to make an eyewash. They also mashed the flowers to make pink dye. Some also saw the plant as a charm to obtain wealth.