K-Country has a LOT of hummingbirds. Once you know what to look and listen for, you can find them all over the place – though given their size, that’s a bit of a challenge. A big lens helps.

A number of species of hummingbirds call K-Country their summer home, with the Rufous the most common but Calliope also fairly plentiful, and the odd Black Chinned around, too. No matter the species, they start arriving around late April from their wintering grounds in Mexico and the Southern USA. Typically the males arrive first, and they are also the first to leave, typically in mid-July. The girls aren’t far behind arriving, but they stick around longer, with sightings getting less frequent by mid-August. 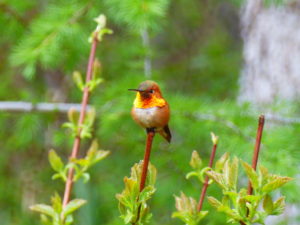 Rufous hummingbirds are easy to tell apart; the male is orange-brown, with a dull brown neck gorget that becomes iridescent red when reflecting sunlight the correct way, which you can see in the photo to the right. The females are shiny green with a grey underbelly and a small black chest spot, and are normally slightly bigger than the males (see photo at the top). The older the female, the bigger the chest spot. 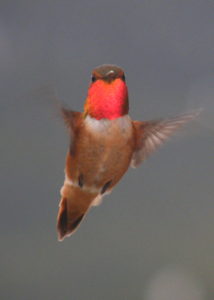 Rufous hummingbirds are aggressive as all get out for their size. As soon as they arrive, the males set up and start defending territories from all intruders, including females. It amazes us that they can mate when they appear to just chase all the females away from all the food sources. During mating season, they buzz around flying giant U shapes in the sky, flashing their gorgets to the ladies sitting in the trees, chittering to get their attention. This distinctive sound makes them easy to find in May and early June. They chase each other (and other birds, too) away from flowers and food sources. We have had one hover 1 foot in front of our face yelling at me to go away. Walk in K-Country in a bright red jacket and a hummer is sure to come investigate. 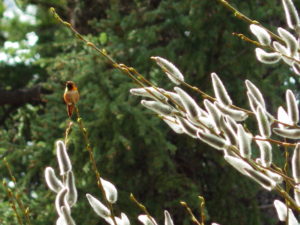 We’ve seen hummers around Exshaw (Jura Creek and Grotto Canyon especially), Dead Man’s Flats, Wind Valley and other places in the Bow Valley like Middle Lake in Bow Valley Provincial Park. They’re common around K-Village, at Black Prince, and near Pocaterra. The Turner Valley area of the Elbow/Sheep is pretty much “hummer central” in the Province. 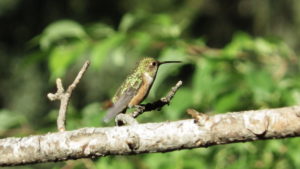 Their tongues are twice as long as their bills, enabling them to get deep inside flowers. Rufous in particular like Indian Paintbrush. While they do eat flower nectar and can be readily attracted to feeders, they also eat protein, usually in the form of spiders. On the Old Baldy trail, we watched a Rufous female come up to a spider web, hover, pluck the spider out of the web and eat it, then wrap her beak in the web to use as nesting material.

Their nests are the size of golf balls, glued together with spider webs. Their eggs are the size of peas. Baby hummers are born with tiny bills that grow to full length by the time they fledge.

As noted, they like feeders. But if you start feeding them, you can’t stop. A male will include your feeder in their territory and rely on it. If your feeder goes away, any other nearby food will already belong to another hummer. He will be chased away from it, and could die because a lack of food. 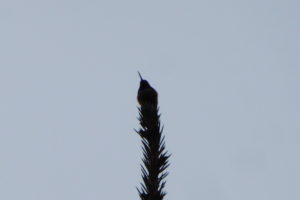 Hummers are surprisingly easy to photograph once found. They typically sit in a tree (though sometimes way high up at the top) guarding their food source from other hummers. The easiest to find are the male Rufous who actually make a distinctive buzz when they fly. Female Rufous and Calliope are much harder, since they are virtually silent, but they are the only things out there that rocket around at 60 mph.

Meet some of the other critters of K-Country here!