Kananaskis is home to three of the four types of grouse in the Province. Here, we write about Spruce Grouse. Another common one you will see is the Ruffed Grouse. Ruffed are the most common grouse in the province.

Telling Ruffed Grouse from other grouse 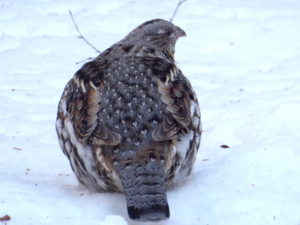 Ruffed grouse are readily differentiated from Spruce or Dusky grouse because they are the only ones with a crest. Often, though, that crest is not standing upright, as in the photo to the right. The crest is a good thing, because without it, you need to look for black shoulder patches on the males, or a black band on the tail, or a fan shaped tail, because the mottling pattern is so similar to the Spruce. 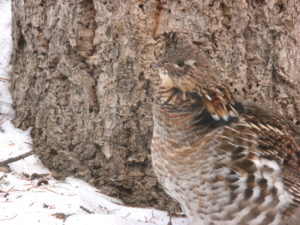 Like other grouse, they are ground dwellers and even ground nesters, and rely on camouflage to hide. While we don’t see many in the summer, we see them all the time in the winter because they stand out against the snow. Interestingly, like their Spruce cousins, the feathers on their toes grow longer in the winter to act as snowshoes.

The “Ringo Starr” of the woods

Ruffed grouse males make the iconic drumming sound in spring mating season. This is a sound that reminds us of a badly-tuned diesel engine starting, and that is more felt than heard. Amazingly, this sound is made only by flapping his wings – not by hitting them together or stomping on logs. 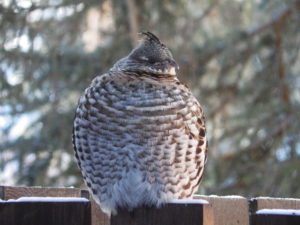 Most every winter, we’ve had several Ruffed Grouse hang out in our yard for weeks at a time. That’s where some of these photos came from. In December 2015, there was a male, a female and at least 2 young of year. The male sadly died after a severe window strike, and within 12 hrs of dying, became food for ravens and other scavengers, including squirrels and magpies. Ruffed Grouse chicks have abnormally high mortality, too, being a favourite prey of most anything that eats birds. Sad, but thus is the cycle of nature.

Meet some of the other cool critters of K-Country here!