What is a rock glacier?

Many people have not heard of rock glaciers. Just as snow can collect, compress to make ice, and then start to flow, if you pile enough rock up on an ongoing basis in the right place, you’ll eventually develop a rock glacier where the rock can flow, too. The mechanism is pretty simple: continued, long-term erosion of a mountain collects in a space referred to as an accumulation zone. But you need a bit of geography as well. Not all rockfall makes a glacier; not every scree slope is the start of one. The next thing you need is that basin to be of a shape that enables the rock to collect then has a flow path further downhill. Now if you add more rock to the top, the weight of the rock cause the rock in the basin to flow – not fall, but actually flow, like a liquid – downhill.

Some rock glaciers have inside them a core of ice, or just a lot of ice in between the rocks. This ice is far more plastic than the rock, so it enables the combination – like a slushie on steroids – to flow more easily. But you don’t need to have ice inside.

Does K-Country have rock glaciers?

Kananaskis Country has at least two examples of rock glaciers, one much better than the other. The easiest to see isn’t that impressive but is conveniently located at the Rock Glacier lookout on Highway 40 just north of the Highwood Pass. Here, Mt Rae is eroding.

A bunch of siltstone from the Triassic aged Sulphur Mountain formation is falling down and builds up. The vegetation clearly shows the rock down low is moving. But don’t worry about getting out of the way; the movement is on the order of 2 cm per year. Ice glaciers, by contrast, move at 10-30 m per year. 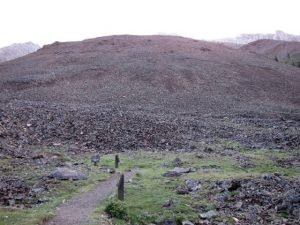 This isn’t a great example of a rock glacier (and some think it isn’t actually a rock glacier, but a geological “topple”). From the parking lot, it just looks like a pile of rubble, as this first photo shows (thanks to Barry Taylor, from HikingWithBarry.com, for use of this photo). The accumulation zone of this rock glacier isn’t visible from the highway; it’s better to get back to have a look. Like, say, from across Highway 40 at the top of Pocaterra Ridge. Barry also took the photo below, giving much better perspective on the size of the glacier (and making it clear that one day, in a couple of hundred years, it will take out Highway 40). 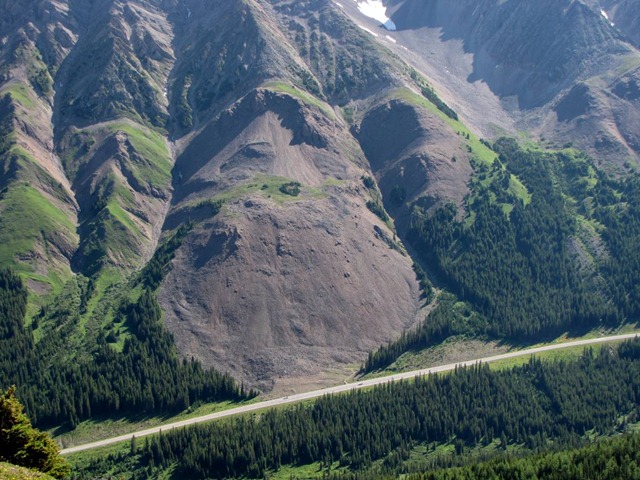 This rock glacier moves so slow that the accumulation zone has grass on it. You can see that the Mt. Rae rock glacier doesn’t look much like a glacier so much as a giant scree pile.

Are there better examples of rock glaciers?

The ones in the photo below and at the top of this article look like a glacier. 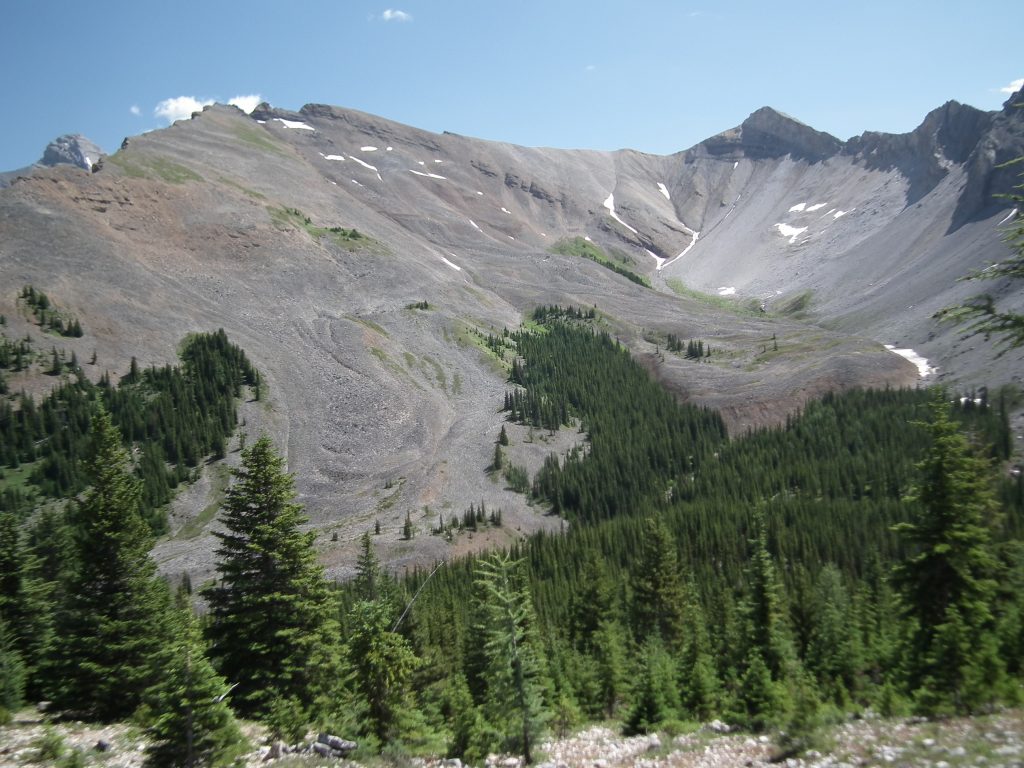 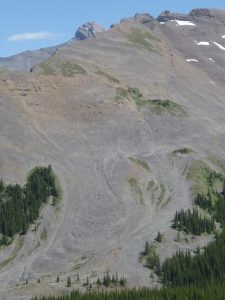 This is a spectacular example of a rock glacier with two lobes. You can clearly see the flow of the rock on both lobes, and each is over half a kilometer long. They actually look like they’re made of ice, though we doubt they are. Here, a whole lot of that same Sulphur Mountain formation is sliding down just like at Mt. Rae. These are, without question, the best examples of rock glaciers in all of Kananaskis Country.

However, unlike the Mt. Rae rock glacier, these hide and are not easy to see. They come off an unnamed peak between Mt. Buller and Mt. Bogart. You can see the nose of the one on the left if you get up on Red Ridge, but only the nose.

The best vantage point is from the Red Basin route, #79 in Gillean Daffern’s Kananaskis Trails Guide, Vol 1, 4th edition. The route leads up to a grassy shoulder of Mt. Buller that is readily visible from the Spray Lakes day use area on the Smith-Dorien Spray Trail. However, there is really no trail at all to get up there (AllTrails is lying to you, as usual), so if you do want to go there, you need to be an expert route finder, bush-basher, have a good GPS, map and compass reading skills and a willingness to explore.

And by the way – the last time we were up there, we found lots of fresh bear scat, rub trees and bear digs on the way up. The area is also popular with hunters, especially in the fall. There are lots of interesting things back there besides the glaciers – but they are for another post.