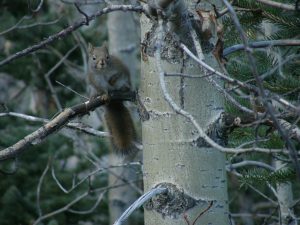 Calgary is filled with accidentally introduced, non-native, Eastern Grey Squirrels. These large aggressive monsters out-competed and kicked out the native Red Squirrel that you’ll find all over Kananaskis. For that, you can mostly thank the fact the Eastern Greys are acorn specialists and adapted to eat the seeds of the non-native ash, maple and elm trees that Calgarians plant – and those don’t grow outside the city. Non-native trees reduced the appeal of the city to the Reds, and made it better for the Greys. So as long as K-Country forests remain basically native, they will be devoid of Greys, but home to Red Squirrels, probably the most common animal you’ll see in the wild.

In fact, it’s hard to go into K-Country and not see evidence of the Red Squirrel. Their tracks are everywhere in the winter, and they seem to have no fear of alerting predators by making noise. Stealthy they are not. In fact, it’s common to be yelled at by squirrels for reasons that make sense only to them. Red Squirrels are only active during the day; any squirrel you are lucky enough to see at night is a Flying Squirrel.

While Red Squirrels always sit in trees while yelling at you, they almost never nest in trees, unlike the Eastern Greys. A Red Squirrel’s home is almost always underground, in a woodpile, or under their own personal “garbage dump”, known as a midden. Middens can be huge; we’ve seen them 10m across, like the one at right. They’re just layer upon layer of discarded cone scales from which they have eaten the seeds. Ben Gadd says that midden analysis shows Red Squirrels like spruce cones best, with Douglas Fir and Lodgepole Pine way down the list. Middens have several real and several fake entrances. In the winter, it becomes obvious which entrances are real. 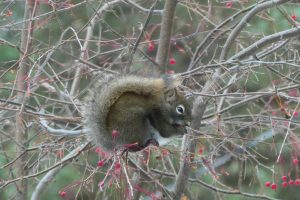 They eat more than just cone seeds. We’ve watched them hang mushrooms in trees to dry, then come back and eat them weeks later. They’ll eat fruit, buds, catkins, the occasional baby bird, egg or rodent, insects, and even carrion. If you find bones or antlers in the forest, a careful examination will almost always show Reds gnaw on them to get the calcium.

An animal’s abundance is often a good indicator that they expect to be heavily predated. And lots of things eat Red Squirrels: coyotes, fox, hawks and owls, pine martens, lynx, bobcats and the occasional wolf target them. We were out doing some winter tracking and saw evidence that a pine marten took a Red down on the fly.

They are obviously active all year round, hiding underground only during the coldest of cold snaps. They travel on snow quite well. But they rely on stored food caches to over-winter, or cutting cones down from trees as they go. It’s not unusual to pass by a spot in K-Country one day, then the next day find the same spot littered with hundreds of cut down cones.

Despite dense spruce forests, they need to have their own space of at least 1 hectare to collect enough cones to survive a winter. The kits, born in June, are helpless and blind, but are out and about by late August. They have until the snow flies to figure out how to locate cones, establish a territory and claim trees. This leads to entertaining “squirrel wars”. Red Squirrels are very territorial, and will try to chase anything out of their territory, including you.

Red Squirrels can chew through nearly anything. Live in K-Country and you are at risk of Red Squirrels in your attic. We are aware of a house that was renovated. They found 1 foot of insulation in the attic, topped by 1 foot of cone scales. The Red Squirrels had obviously been in there for some time.

Meet more of the interesting critters of K-Country here!