As we wander in K-Country, we are travelling in a bear’s home: their living areas, dining areas, and even their bathrooms. Recognizing food that bears eat can help raise your awareness of the possibility that bears are around where you are at any given moment.

Bears are omnivores, but while they love the ability to get a good protein source like an elk or a deer, almost 80% of a bear’s diet is fruits and vegetables. This is true of both grizzly bears and black bears. You may have heard that bears love berry season, but what berries do bears eat? 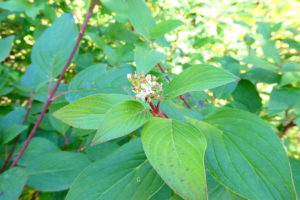 Not long after the shepherdia berries are all eaten or have dried up, starting in September, bears turn to another popular food, the berries of the bush Red Osier Dogwood, Cornus sericea. This is a plant with many names. It’s also called red brush, red willow,  redstem dogwood, redtwig dogwood, red-rood, American dogwood, creek dogwood, and western dogwood.

Dogwoods look willow-like, but have distinctive red stems that turn even more red after the first frosts. They have little clusters of tiny flowers in the spring. The berries first appear in July and are green, but they turn white as they ripen. The photo above right is typical of a Dogwood in mid-switch. You can see flowers, green berries and even tiny white ones. Dogwood leaves turn a brilliant red in the fall.

Where do they grow? 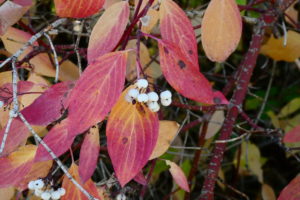 Dogwoods like it moist. They commonly line creek beds, stream edges and lakeshores. The name “Osier” is from the French “osiere”, meaning “that which grows in a stream bed” after all. Lac Des Arc’s campground closes annually in part because the lake’s edge is lined with Dogwood, and the local bears know it. Dogwood is common in Willow Rock campground in Bow Valley Provincial Park and Three Sisters Campground in Dead Man’s Flats. All three commonly have fall bear warnings and closures. 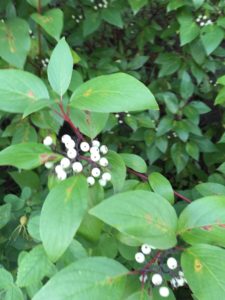 The white berries are edible but bitter, and were combined by native Canadians with sweeter berries to make them more palatable. Native Canadians also smoked the tender inner white bark after it was dried. They would use the red outer bark for tanning and dying, and would weave the pliable stems into baskets.

Bears, moose and birds all like the berries. Moose browse on the plant generally in the winter. There are many kinds of Dogwood in North America. Only Red Osier and its much smaller cousin, the Bunchberry, grow in Alberta.

Meet some more of the interesting plants of K-Country here!