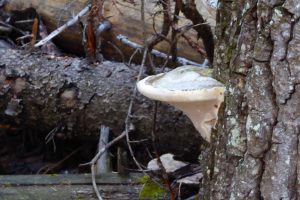 If you take a grocery-store mushroom, and evolve it so the stem comes out the side instead of the bottom, you end up with Shelf fungi, which are in the Polypore family. There are at least 10 common types of Shelf Fungi in K-Country, and the one you will see the most is Fomitopsis pinicola. There are several that look and grow like Fomitopsis pinicola (one very similar looking type, Piptoporus betulinus, grows only on Birch trees). They all fall into a family commonly known as Bracket Fungus. 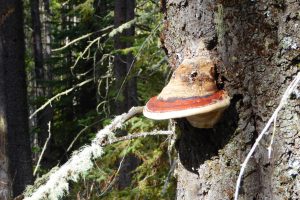 Most of what you see on any Bracket Fungus is called the “conk”. The conk is the fungi’s woody fruiting body. The specific Fomitopsis pinicola type of Bracket Fungus is commonly called the Red-Belted Conk (for what we suspect are obvious reasons). There’s a core on the inside that feeds off the tree, and the underside has pores that release it’s spores. Red-belted Conks are tree killers. The core puts out thin threads that eat the cellulose in the tree it is on; this puts it in the category of the “Stem Decay” fungi. It creates “brown rot”, making the tree brittle and weak inside, and susceptible to falling over in high winds. Red-Belted-Conks like coniferous trees, but can be found on deciduous as well. 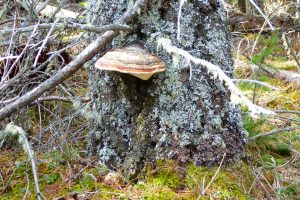 Once the Red-Belted Conk arrives, the damage it does to the tree makes it much easier for woodpeckers to drill into the tree. After the trees die, it very effectively starts the process of the tree’s decomposition. You’ll find them on as many dead trees as live ones. Forests full of old trees where fire has been suppressed (like the ones in K-Country), or fire just doesn’t happen, are often loaded with Red-Belted Conk. In temperate rainforests, like Alaska and coastal BC, Red-Belted Conk’s are responsible for a significant part of the forest’s ecology. 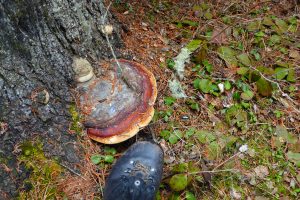 Red-Belted Conk live a long time; hundreds of years, and long after the tree they’re on is dead. They get bigger and tougher with age. Spores from fruiting bodies spread by wind, and need to land on exposed wood or damaged wound to latch on and grow. Often, these are low to the ground; it’s rare to find a Red-Belted Conk higher than eye level. Very young ones are white, and when the first colours arrive, they tend to be more orange, getting redder with age.

Some fungi are edible; not this one. About the only human use of it is that, in a pinch, it can make good tinder for a fire. But in at forest full of dead and dying wood where it lives, there’s always better tinder to be found.

Meet more of the cool fungi of K-Country here!