Here, we write about Hailstone fire lookout, the most southerly lookout in K-Country. Raspberry Ridge is the second of the lookouts in that “forgotten corner” of K-Country. Accessed from Hwy 940 at the head of the Lost Creek logging road near Cataract Creek, the hike up to the lookout ridge is about a 15 km round trip with 650 m of altitude gain. It’s most popular in the summer, but with the right skills, it could be a winter trip as well. It is a LOT more challenging in the winter with steep sections, route finding issues and avalanche exposure.

Note that none of the hiking trails in this area of the Cataract Creek Snow Vehicle PLUZ are official or maintained at all. The snowmobile trails that do exist are maintained for winter use only. 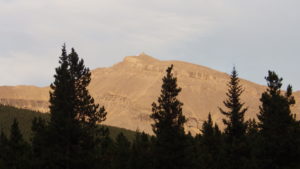 While the reasons for the relocation aren’t really clear, most believe it was because you couldn’t build a road to the top of Mt. Burke. In addition, the pack trail to get up there (currently the hiking trail) was dangerous for horses. 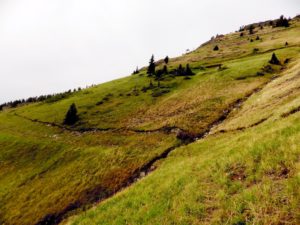 Accordingly, in 1953, a road was constructed to the top of Raspberry Ridge. It zig-zagging up the steep south facing grass slopes (pictured at right). A new, standard 12’ x 12’ lookout was constructed, and staffed for the first time in 1954. It was replaced by the present building in 1977. In addition to the lookout, there’s also a FireNet radio repeater station up there.

Courtesy of helicopters, the access road ceased being necessary in the 1980’s. The road was reclaimed in 1986 – though remains obvious the whole way. Closer inspection of the uppermost switchbacks will show the road has collapsed and would be very unsafe to travel on. The hiking trail up uses some short bits of the road.

The hiking route up follows the old overgrown road for the first 3.7 km, climbing gently the whole way. Aside from one steep creek chasm, it’s a pleasant stroll. The road finally breaks out at south facing grass slopes on the end of the ridge at a rock cairn, and at this point, you have choices. 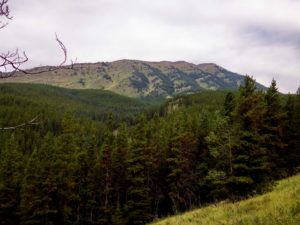 When the road was decommissioned, some brilliant hiker decided that the best way from here to get up was straight up the cliff face, gaining 350 m in just 1.3 km in the process. That’s the face you climb in the photo; the lookout is just visible on the right-most peak. A good way down in the summer, maybe, but we like to stick to the old road and the grass on the way up. Both routes expose you to avalanche risk in the winter.

The summer trail doesn’t follow the old road the whole way. After one set of switchbacks, it makes a beeline for the ridge’s south end. Once on the ridge, it follows the ridge crest through Limber Pines to the lookout on the summit.

The views are fabulous. They stretch:

As usual with fire lookouts, remember that this is both a workplace and private place of residence. This one in particular is surrounded by a locked, gated barbed wire fence about 100 m back from the lookout itself – which ought to tell you something.

Enjoy your lunch at the picnic table next to the interpretive signs, but do make sure to skirt the fence and go north of the lookout for further spectacular views.