Kananaskis Country is home to the most easterly glaciers in the Rockies. Several of them are quite accessible to mere mortals like us. In this two part series, we’re going to look at K-Countries many glaciers, and describe two that you can easily get to. For a full overview of the glaciers in K-Country, see our write up on Old Goat Glacier here.

Glaciers can be dangerous.

They can hold features like crevasses and bergschrunds and seracs that can readily kill you. They commonly are in places where avalanches occur. Some things that look “solid” are in fact rock on ice on a lot of air. Such bridges can collapse at any time.

There are “safer” times to visit them, and “safer” glaciers to visit, but no glacier is truly risk free.

The Rae Glacier is easier to access than Old Goatt Glacier. Head down Highway 40 to the Elbow Lake trailhead, just south of the Highwood Pass. Hike the short 1.75 km up to the lake and backcountry campground. You’ll gain 150 m along the way (and pass a rock field that’s home to pikas).

Head through the campground and skirt the lake on the south side. You’ll arrive at an alluvial fan formed by the creek coming down the glacier and valley beside it. Turn right. 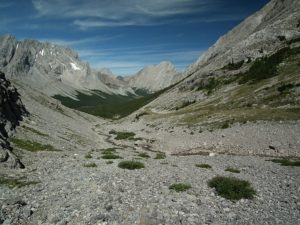 Pick your way across the rocks for about 400 meters after which the trail reappears at the base of a rock rib. The trail is in good shape going up the rib and through the trees. The trail then weaves in and out of the rocks near a creek. You’ll get to the glacier less than 5 km after leaving your car, with only about a 300 m climb in total. The photo at right is looking back down the valley from close to the glacier’s toe.

This is a pretty stark basin, like most glacial basins are. A combination of ice under rock, and the fact that the ice used to be farther down, limits the plants that can grow here. 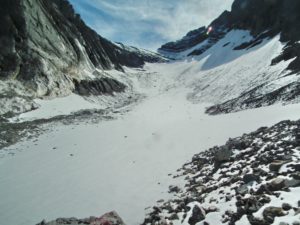 Like Old Goat, part of the way to the glacier’s visible toe you’ll notice that you’re now walking on what looks like piles of gravel. In fact, it’s ice covered by a layer of gravel. The glacier’s bigger than you think it is. Crevasses and other hazards can be hidden by rocks at the edge of the glacier. No matter how tempting, never go on a glacier, even the rock covered portion without proper training and equipment. You’re risking everything from crevasses to avalanche danger (even in summer).

Like Old Goat, this is one of those places where people ski all summer long. Don’t be surprised if you see ski tracks coming down or going up.

The Rae Glacier is not just accessible It’s really well studied and understood. Groups from the geography departments of the University of Saskatchewan and the University of Victoria have been examining it for years. They have published multiple papers on it, two of which you can read here and here. 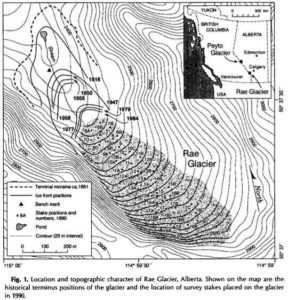 Like all western Canadian glaciers, Rae has been melting back faster than it has been moving forwards for the last 180 years. Prior to that, the last “little ice age” of global cooling started about 1350 AD and peaked in about 1850. Rae was advancing in that window.

The maximum extent of most of the North American glaciers was around 1844. Everything’s been melting back since then, and Rae is no exception. It’s smaller than it was in 1844; it’s the same size today as it was sometime before 1844. However, no one was around to take pictures (and the moraines you can use to measure glacial extent are gone). The glacier’s recession since 1881 is clearly shown on the map to the right, taken from one of the papers linked above. If there is any symmetry in this, the Rae’s the same size as it was 180 years before 1844, or somewhere in the mid 1600’s.

According to the above research, Rae moves forward at an average velocity of 5 m per year (13 mm/day) at the top. The velocity is only 1 m/yr at the toe — and it’s moving faster on its south side than the north. The retreat rate of the toe was down in the 2.2 m/yr range in the 1970’s. It was up in the range of 7 m/yr in the period 1916-1951. So this glacier isn’t moving very fast in any direction, and its recession has sped up and slowed down several times in the last 170 years. The ice is up to 90 m deep. There is a documented berschrund and numerous crevasses up high you can read about in the papers. 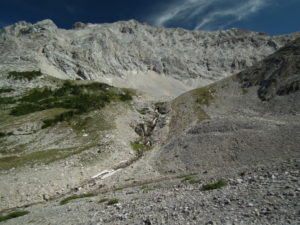 There’s a commonly held belief that the Rae Glacier is the main source of the Elbow River. Yes, it is a contributor for sure – but only a very, very small one. The majority of the “headwaters of the Elbow” actually comes from a waterfall leaving the basin next door to Rae (pictured at right) which contains a nevé.

A nevé is a place where snow accumulates but is not glacial; kind of the midpoint between the light fluffy stuff that falls and the highly dense glacial ice. There’s pretty much always a raging spring that is roaring down the canyon (creating the creek that is tough to cross in mid-summer). That spring is sourced from the nevé. The Rae glacial creek is a mere trickle by comparison. The water “appears” from a spring at the basin edge of the valley next to the Rae Glacier. Way in the back of that basin is a huge snow patch that’s sort of trying to be a glacier.

Of course, Elbow Lake is spring fed and also joins the Elbow River, too, also providing the river with substantially more volume than is leaking out of the Rae Glacier. There’s at least one theory that says that the springs feeding Elbow Lake are sourced from the water under Rae Glacier. That’s entirely possible, as both sit on a single section of the Mount Head formation. In addition to having fossils, the Mount Head is full of both porosity and permeability. It’s also partially soluble in water. A cave system connecting the two is very possible.

In the right conditions, you can snowshoe up to the glacier by late November. Being inside the winter closure area on Highway 40, the last day the trailhead is accessible is December 15th. Unlike Old Goat, where you have to climb a steep wall to get to the glacier, Rae’s much more benign a walk, though it does have some avalanche slope exposure. However, in the winter, it just looks like one big snowfield, and the glacier’s dangers can be hidden under a thin snow cover, creating the risk that you walk too far. For us, it’s best to visit in late summer when you can readily see moving ice in its VERY slow action, and stay safer while doing so.