There’s no such plant as a Pussy Willow!

Let’s start by making it abundantly clear that there is no Salix (willow) species actually called a “Pussy Willow”. There are many, many kinds of willows in K-Country. Nearly all of them put out fuzzy catkins of various shapes and sizes. Nominally, one of the several common names for the Salix discolor is a “Pussy Willow”. However, there are other species, both in Alberta and elsewhere, that also have that as one of their common names. So there (kind of) is no single plant that is “Pussy willow”.

On top of that, there are some aspens that put out fuzzy catkins, too. Young aspens can get mistaken for willows.

In the end, “pussy willow” is a generic common name for anything with a fuzzy catkins, no matter what species you are looking at. 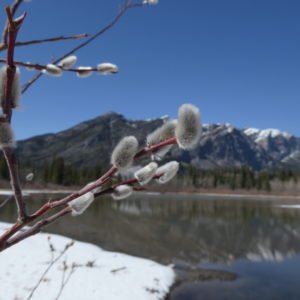 Those fuzzy things are actually specialized flowers. Catkins are defined as a scaly spike of flowers of one sex only. Yes, there are male and female willows. The fuzzy silver “fur” of the catkin exist to keep the reproductive flower parts inside the fur warm. And warmth is needed. Willow flowers/catkins start appearing in February, long before the plant leafs out, and while it is still the dead of winter. Most stay on the shrub until at least late-April. Those silver fuzzy hairs trap air heated by sunshine. Their insulating properties keep the reproductive parts inside warm, enabling early development of pollen on the stamens (the male bits) or ovules within the carpels (the female bits).

As catkins develop, eventually the stamens stick out, and the pollen (normally yellow) is exposed. However, the pollen is not released on the breeze to find other catkins. Moving the pollen around in willows requires insects. To bees and flies, willow catkins smell great. There is a subtle aroma to us, but to them, it’s a magnet.

And at the time of the year they are ready to be visited, they’re about the only thing to insects worth visiting. There are very few flowering plants whose flowers are open in mid April (the Prairie Crocus is one).

Once pollinated, the carpels in the catkins turn to seed pods. All those fuzzy hairs fluff out to look like bits of cotton wool, and they’re attached to a seed pod. These pods contain hundreds of tiny seeds. They are picked up by the wind, or knocked off by the rain, and the seeds disperse. Willows often grow in dense thickets when the seed pods don’t disperse far because they came off in a rain storm.

There are over 60 species of willows native to Alberta. Here’s a full list of them, including how they are identified. Anyone who can do that identification is far better than us. The guide includes the species in the Populus family (the Poplars, Cottonwoods and Aspens), because they are related. This explains a little bit about why you can find catkins on some Aspens.

For an even greater in-depth explanation of the biology of pussy willow catkins, click here.

Learn more about some cool plants of K-Country here!