Here’s something we bet you didn’t know, and will be really helpful if you play trivia games: Kananaskis Country is home to not one, but TWO, “Public Land Recreation Trails” — but one isn’t a trail at all!

What is a Public Land Recreation Trail?

PLRTs as per the Public Lands Administration Regulation, are trails on public land designated by the Minster of Alberta Environment and Parks and managed for recreational use by the department.

Section 178 (and Schedule 4) of the PLAR defines Public Land Use Zones such as the Kananaskis Public Land Use Zone. Section 179 (and schedule 5) does the same thing for Recreation Areas, and Section 180 (and Schedule 6) does the same thing for PLRTs. Subsequent sections then go on to explain the rules on all three, which are VERY limited. In truth, it is difficult to understand what PLRTs are actually for by reading the PLAR. Here’s the full list of rules specific to PLRTs (general rules regarding Public Land have to be followed as well): 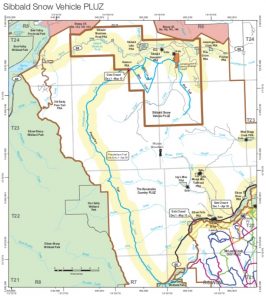 The Ford Creek-Jumpingpound Forest Recreation Trail is not what you think it is. You know it (and it is signposted) as “Powderface Trail”, a somewhat bumpy, narrow gravel road connecting the Sibbald area with the Elbow Valley, and used to access trails like Lusk Pass, Canyon Creek and Jumpingpound Summit. It is NOT the Ford Creek trail used by hikers, bicyclists and equestrians. Yes, the road itself is a designated PLRT (kind of; see below). Use of snowmobiles is permitted on the road from December 1 to April 30 each year. The staging area to access it is the Dawson Recreation Area, the same location used to access the snowmobile trails in the Sibbald Snow Vehicle PLUZ. The road is also heavily used by logging trucks. Why they don’t officially change the name this PLRT to the Powderface Public Land Recreation Trail is beyond us. 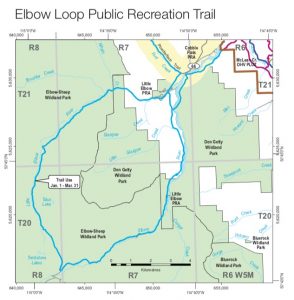 The second trail is the Little Elbow Loop PLRT, which was created long before the Parks it currently runs through ever existed. This “trail” is an old fire road. Almost 80% of the loop is now within Elbow Sheep Wildland Park, Don Getty Wildland Park or Little Elbow PRA, as you can see on the map to the right. Snowmobiles are permitted on the Little Elbow Loop from January 1 through March 31st each year. It’s a tough trail to access by snowmobile. The first option is to start at the Dawson PRA, then ride the Powderface Trail to get to the Little Elbow PRA, then join the loop. The second option is through a connector trail from the McClean Creek OHV trail system.

Interestingly, the Kananaskis PLRTs (which are really roads) themselves aren’t designated, but the numerous quarter sections of land they run through are. The Ford Creek-Jumpingpound one includes the following in Township 21, Range 6, West of the 5th Meridian:

These particular parcels are all south of the Elbow River and create a connection to the edge of the McClean Creek PLUZ where snowmobiles are also permitted.

So why were these two PLRTs created?

In short: to permit snowmobile usage.

As noted here, Public Land Use Zones are generally created to permit or restrict activities, and the whole system of PLUZs in Kananaskis permits or restricts off-highway and snow machine usage. These two “trails” just add clarification to the system, and permit snow machine usage in a space where snow machines would otherwise not be permitted.