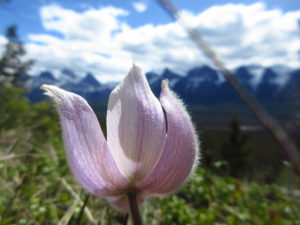 Probably the most obvious harbinger of spring in the flower family is the Prairie Crocus, which is commonly the first flower to appear (so long as you ignore pussy willows — and they’re catkins, not flowers). On sunny southern slopes, flowers often appear just as the snows retreat.

In the Bow Valley, that can be as early as mid-March, or as late as mid-April. Places like Canmore, Exshaw, Bow Valley Proincial Park, the Sibbald area and the fields and grasslands of eastern Kananaskis are good places to look for Crocus.

It’s all about the name

It’s a badly named plant. It’s in the buttercup family, so isn’t a Crocus at all. Its alternate name, Pasque Flower, makes more sense in Europe; “pasque” means Easter, and in Europe, the version of the plant there, Pulsatilla patens,  plant blooms at Easter. Here, Easter tends to be too early for the flowers.

And it turns out the Eurasian plant isn’t even the same as this one. Another name for it, Wind Flower, is very uncommonly used and doesn’t seem that appropriate; it came from the original Latin name Anemone patens; anemone comes from wind, which is how the seeds are distributed. Now known to be different from the European species, it got its very own Latin name: Pulsatilla nuttalliana (nothing to do with wind). Accordingly, we’re stuck with the name Prairie Crocus.

The flowers range from a deep blue and purple to almost whitish; we seem to see more white or pale ones in K-Country. It’s far more common on the prairie itself; it’s the provincial flower of Manitoba and the state flower of South Dakota. On grasslands where cattle run, purple fields of dense crocuses are a sign of overgrazing.

When the flowering is done, they put out seed pods (pictured at right) that look a bit like anemone, all fuzzy and ball-like.

The Prairie Crocus may look pretty, but don’t touch it. All parts of the plant contain protoanemonin, which is poisonous if eaten, and causes rashes on skin, especially mucous membranes. Native North Americans used it as an anti-rheumatic, crushing the leaves and rubbing them on joints, much as we would use Rub A535 today. They also used it to induce abortions or childbirth, and it’s an ingredient in commercial “natural” preparations found today that treat premenstrual syndrome.