Plateau Mountain is a fascinating place with its own protections as an Ecological Reserve. You can read more about it and how it is managed here.  In addition to its periglacial features, permafrost and rare plants, it has three caves. The most significant, and certainly the most unique, is the ice cave. 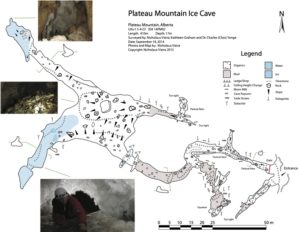 As you may have read on our Plateau Mountain page, 5-20 m down, it’s permafrost under all that rock. The cave is almost 100 m long and has spectacular ice features. It has ice crystals that are multiple centimetres long that even in the cave’s depths melt by your mere presence.

For decades, you could drive to within 500 m of the cave’s entrance, so the cave saw a lot of visitors. The thousands of cave visitors prior to the 1970’s melted out significant amounts of the ice. For protection, the cave was closed and gated in 1972, and by all accounts, now it’s darn near impossible to get anyone to let you in. It’s a world renown cave, but no one is going in it any time soon. 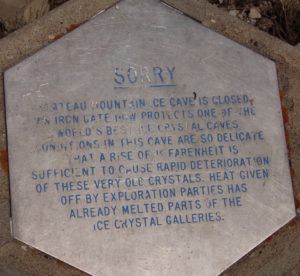 On a trip up there in 2015, we tried just to find the gated entrance – to no avail. Even with a gate across it, it hides. The cave entrance is some 60 m down the steep scree face in the photo at the top.

Now, however, the road that ends close to the cave entrance the plateau is abandoned, though it can still be hiked (but not biked. See our Plateau Mountain page for biking restrictions). At the north end of that abandoned road are two decaying concrete markers with plaques that tell a short version of the story of the ice cave. In typical Canadian fashion, the first word on the plaques is “Sorry”.

Being exceptionally unique, the ice cave is well studied. You can take a peek at a summary of just one of the papers on this page, though you have to scroll around a bit to find it.

Plateau’s two other caves, January Cave and Sheep Cave, are interesting in their own right.

Thirty-two species of animal bones have been pulled from January Cave, the oldest of which were 33,500 years old. January Cave is only ~20 m long, so not a big cave by any stretch.

Sheep Cave, whose entrance is near the ice cave, is also short, at about 50 m in length. The cave floor is just a foot above the permafrost layer.

But visiting either is unlikely, too; Sheep Cave is 150 m down a nearly shear cliff face, and January Cave’s quite a difficult haul up from a flood ravaged, rock filled creek gully at Plateau Mountain’s south end.