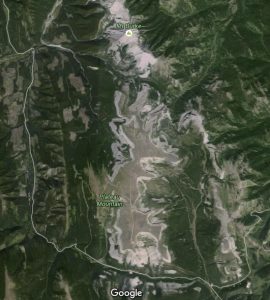 By those definitions, Plateau Mountain is about as special a place as you will find in K-Country. For starters, most Kananaskis mountains are pointy. Plateau is readily distinguishable because it’s flat. In fact, it’s 14 square kilometers of pretty close to ironing-board flat. It’s fun to look at the image of Plateau on Google Maps; it stands out like a sore thumb.

Second, it has permafrost. Yep: Welcome to the arctic. Having worked for a while in Canada’s north, we can tell you that exploring the top of Plateau Mountain is like wandering around the tundra near Inuvik (technically referred to as “periglacial”). 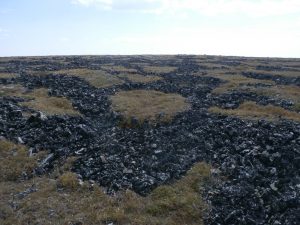 The most obvious tundra-like feature created in permafrost is patterned ground. Water percolates up from the ground, and the freeze/thaw cycles force large stones to the surface. Lateral forces then turn the rocks into geometric shapes. So large sections of Plateau Mountain are made up of hexagonal rings of rocks, sorted stone circles, polygons, steps and frost boils. It also has “Felsenmeer”, or “rock sea”, a layer of angular rocks caused by frost-shattering. This is not that rare; you can see frost shattered rocks at the top of most K-Country summits. But having most of the 14 square kilometres of its top covered in it makes Plateau pretty unique.

The permafrost is shallowing

Continuing studies on Plateau’s permafrost show that, counterintuitively, it’s getting closer to the surface. According to The University of Calgary’s Stuart Harris in his report, “Climate Change and Permafrost Stability in the Eastern Canadian Cordillera: the Results of 33 Years of Measurements“: 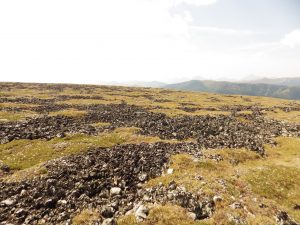 Third, Plateau is ridiculously old and more importantly: unglaciated. The top is a nunantuk. It was above the ice sheets when the last period of glaciation – the Laurentide ice sheets – covered the mountains and most of Alberta. Tis ice sheet also pushed stuff around like the Big Rock in Okotoks, and made glacial Lake Bassano that flooded out and exposed the badlands. So the rocks on top have been out in the open for over 90,000 years, when the Laurentide sheet started to expand. They were obviously were there long before that. The rocks are therefore covered in lichens that are more than 100,000 years old. Be careful where you step.

The plateau sits at around 2,500 m. That makes it higher than many of the mountains nearby, so the view from up there is… uninspired in the middle. Only distant tall peaks stick up. It’s a lot of flat meadow. A part of the plateau to the west blocks views of the mountains of the Divide. You have to get near the plateau’s edge to see east or south. The view to the north takes in Mt. Burke. From the north end you can look back at Mt. Salter. 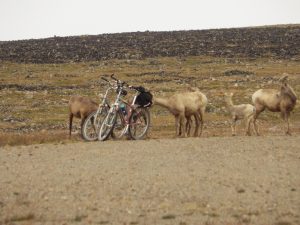 Plateau is such a weird place, it has its very own distinction: it’s a designated Ecological Reserve, the only one in Kananaskis and one of only 16 in the Province. How it got this designation is interesting.

The history: oil and gas save the day

Being a big dome-like structure, it’s kind of a natural place for geologists to drill for oil and gas. The first gas field drilled from up there, which was discovered by Husky in the 1950’s. It had just 3 wells drilled in it, though 4 pads were built. All the original wells were drilled in 1956-1958, are long abandoned. It’s almost impossible to detect they were ever there – though the roads to access them remain, sort of. Two more well were drilled in the 1970’s, and they remain. Up until 1978, you could drive your own car the entire length of the plateau.

In the 1980’s, based on all the uniqueness up there, the Alberta Wilderness Association partnered with Husky Energy (who, by the way, have been Friends of Kananaskis supporters) to push for the mountain’s top area to be designated an Ecological Reserve. The 2,323 hectare (5,740 acre) Plateau Mountain Ecological Reserve was established under the (then) “Wilderness Reserves and Natural Areas Act”. It was approved by the Cabinet December 12, 1991 in large part courtesy of Husky Energy. 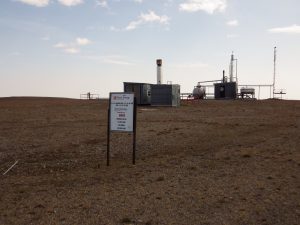 In the late 1990’s along came PetroCan (now Suncor), who acquired the gas rights in the area from Husky. For those who care, the gas produced was processed way down in the Crowsnest Pass at Coleman at a plant specifically built for the field. Since Devon closed that plant in 2010, the remaining wells no longer can produce. There was an idea floated by Suncor some years back to re-divert the gas to plants to the north. That never came to fruition. In 2013, Direct Energy bought Suncor’s assets up there. Both of the wells that remain are currently capped.

The management plan for Plateau Mountain was signed in January 2000 by none other than current Friends Board member Dave Nielson. At the time, he was the Director of Natural Resource Service for the Bow Region with Alberta Environment.

Prior to 1991, the only part of Plateau Mountain that was a protected area was a Natural Area around the ice cave. Because if the rest of the Plateau isn’t strange enough, it also has 3 caves, but that’s a story for this page.

Ecological Reserves are designed to protect the ecology, so very little is permitted in them. 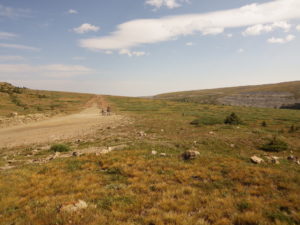 “Active” roads still exist to get to the top to service and monitor the gas wells (you can see the road up in the photo to the right, including the climb up the plateau in the distance). Other older roads exist up on top leading to the farthest northern reaches of the plateau, about 8 km long. Interestingly, the road to the north remains virtually intact. This despite the well being abandoned in 1957 and the last vehicle access being stopped in 1980. Just reaching the top is about 9 km up the road from Hwy 940, but you are permitted to drive the first 4.3 km.

Pursuant to Section 8(1)(g.1)(iii) of the handily titled “Wilderness Areas, Ecological Reserves, Natural Areas And Heritage Rangelands Act” biking and riding horses are allowed on the first part of the road system up to the first wellsite. But they are allowed on this part of the road only. They are not permitted on the (now disused) road running the length of the plateau. The goal is to protect the rare environment, so visitors should tread especially lightly up here, and would be wise to restrict all travel to the old road network.

Oh, and do take note: while everything looks flat, the north end of the plateau near the ice caves is almost the same elevation as the gate on the start of the road up. So if you walk up to the north reaches of the plateau, you’ll end up climbing the mountain twice.