The dozens of various species of Cladonia lichen in K-Country are unmistakable in the forest. More commonly called Pixie-Cup Lichen, they seriously look like little green golf tees.

The most common Pixie-Cup you’ll find in these parts is Cladonia deformis (sometimes called C. sulphuriana), or Sulphur Pixie-Cup. The name comes not from sulphur in the plant, but from the sulphurous tinge of yellow colour given to the normally green Cladonia lichen. Sulphur Pixie-Cups can be found in any cool Rocky Mountain forest, but are most commonly found in snowy, higher elevation forests – which describes a lot of K-Country. 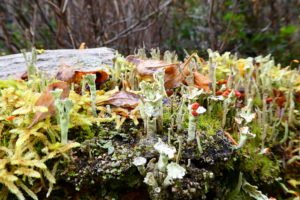 But you can also find other members of the Pixie-Cup lichen family. In the photo to the right, the ones on the left are Sulphur Pixie-Cups. But the ones on the right with the red rings are Red Pixie-Cups, C. boreale. Those red bits are the fruiting bodies of the lichen. It’s not uncommon to find multiple types of Pixie-Cups growing together.

Another frequently found type in K-Country is C. cornuta, or Common Pixie-Cups, pictured below. These are less golf-tee in shape, and look a bit more like overly tall, weird, bright green grass. Rather than having fruiting bodies, like the Red Pixie-Cups, they are covered in little bumps called Sordium. Collectively called “Soredia”, these are the reproductive bits.

Like all Lichens, the outer part of a Pixie-Cup is a fungus (like a mushroom), and the insides are green algae. The fungus creates the environment for the algae to grow, and the algae produces the food for the  fungus – a great symbiosis. But Lichens also eat decaying wood, and are found on the ground digesting the dead and decaying vegetation, much like the mosses they grow with.

There are literally dozens of different types of Cladonia species in K-Country. All are worth taking a peek at next time you’re wandering in the forest. Their interesting shapes and colours make them great macro-photography subjects.

Meet more of the cool fungi of K-Country here!