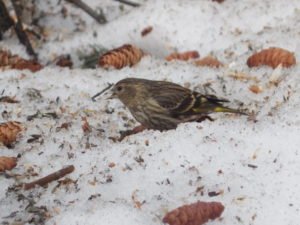 You’re SURE you just saw some kind of Sparrow, except this one was a bit… yellow. Congratulations: you’ve found a Pine Siskin.

With distinct but small yellow patches on the wings, on the bum, and on the chest, plus unmistakeable wing bars, Pine Siskins aren’t that hard to ID. But you will be forgiven if you first mistook it for a sparrow of some kind (or any one of many other “little brown jobs”). 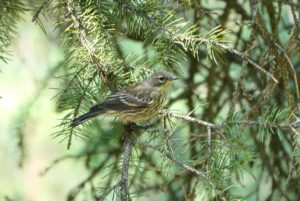 Pine Siskins are year round residents of K-Country. But K-Country is the northern limit of their winter range. Draw a line due east from there across the continent to the Atlantic Ocean, and you can find them south of that line all the way to central Mexico. In summer, they’ll spread all over the province, an even up into Alaska.

Siskins are an irruptive species. You might not find any, or you might find a lot of them; it’s all about the food. They are readily attracted to feeders, and are fairly friendly. If you know their song, you’ll often hear them and see the motion of a flock of them in the tops of trees, though they are mostly a ground feeder. They eat minerals off roads, too, so lookout when you drive. 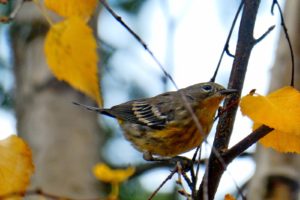 If food is REALLY good, they won’t even migrate. Their primary diet is seeds. While they live in conifers, they love things like thistle seeds, dandelion seeds and insects, too, especially aphids.

They are VERY cold tolerant. Siskins can ratchet up their metabolic rate by an order of five for several hours at a time. They put on 50% more winter fat than their cousins the Redpolls so they can do this when needed.