It is a rare day to be out in K-Country and not see some evidence of a Pine Marten’s presence. Seeing a Marten is more rare, however, because they are fast, very well camouflaged, adept on the ground and in trees, and very secretive. But the evidence that a Marten has been around, including tracks you can find in the snow and the poop they like to leave in the middle of a trail summer and winter, means there are a lot of them around. 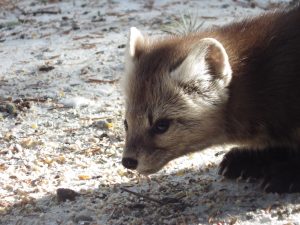 While normally called Pine Martens, they are more correctly known as the American Marten. True Pine Martens are a European species, Martes martes, but ours are called Pine Martens regularly. We suspect they’re more commonly called Pine Martens in Canada because of their range, the majority of which is in Canada. You can find them throughout the boreal forest of Canada, with only small population numbers in small pockets in a few western American states, plus New York and New England. They are relatively common in K-Country. There are two main subgroups, and 14 specific sub-species in North America, but the jury is kinda out on that, as there are basically no differences between the sub-species.

They are not fans of logged, recently burned areas or meadows. These little critters are denizens of the mature spruce and coniferous forests – especially ones full of deadfall and understory litter – all of which are hallmarks of K-Country. They like this terrain because that’s where their lunch lives. 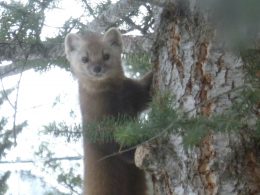 Their diet is high in rodents, such as voles, mice and squirrels. But they’re not picky and will eat bird’s eggs, berries, insects, snowshoe hares or pretty much anything else edible that they can kill. They are not large, only about 50 cm, a third of which is tail. Like all members of the weasel family, they come with an attitude that far outstrips their size. They are downright ferocious. We know someone who live-trapped one to relocate it (it was regularly getting in his attic). It sounded like the Tasmanian Devil from those cartoons of yore, and it did its best to tear the metal cage to shreds. 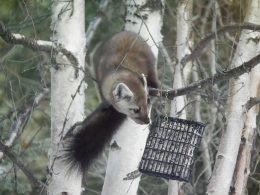 Martens are a tough thing to see in the wild, typically starring at you (sometimes hissing or snarling) from a perch in a tree they have scampered up like in the photo at the top of this article. Martens are regular visitors to neighbourhoods near old-growth forests. Here, they will go after bird feeders in winter. They terrorizes (and readily catch) Red Squirrels, and not uncommonly, live in abandoned squirrel middens. We’ve watched them catch mice in neighbourhood yards. Their daily caloric requirements equate to ~3 voles per day; they are very effective rodent controllers. Being opportunistic, their diet changes through the year.

Female Martens are not as big as the 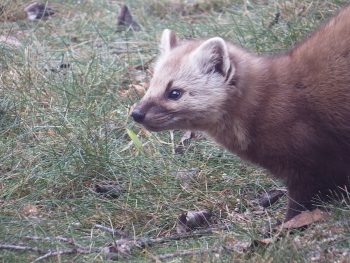 males, and one female we saw was fairly small, lacking the more distinctive spotted tummy pattern of the male. Martens are allegedly mostly nocturnal. However, we have seen Marten evidence in the wild day and night. They are solitary critters, and will get into fights with other martens they meet. They live in home territories of up to 15 sq. km. (males have bigger home ranges than females), which they establish by scent marking.

The marten population in K-Country is plentiful and stable, primarily owing to the high quality of their habitat. They are not that fast to breed, only starting to do so in their second year. Despite this, Martens are actively trapped in the province, including K-Country. There are grandfathered traplines in some of the Parks, and numerous traplines on the non-Park land.