Peltigera lichen species are common in K-Country, growing richly on the forest floor among other fungi and flowering plants. There are over 100 types of Peltigera, some 35 of which appear in North America, and 23 of those are in Alberta. They are often referred to as the Dog Eared or Pelt lichens. 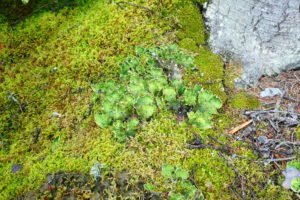 Remember, lichens are what happens when a fungus takes up farming. In the case of Peltgera, the key ingredient is a cyanobacteria: Nostoc, though it can also be Coccmyxa.

Two very common varieties are in K-Country. The first is P. aphthosa, pictured at right and below. It’s readily identified as brilliant green (especially when wet). If there are brown spots on the top, that’s Nostoc at work. P. aphthosa likes it wetter, and never grows directly on soil. It’s commonly found from on, in or around feather mosses. P. aphthosa is most commonly called Pelt Lichen, but it is also called Green Dog lichen, Leafy Lichen, and Common Freckle Pelt. It is circumpolar and loves arctic-style ecosystems.

By contrast, P. canina, is olive green and somewhat drab; its pictured at the top and at right. The undersides of its lobes are white or tan. P. canina is the Peltigera species that is most commonly known as Dog Eared Lichen. The curled up bits resemble dog ears, but in fact, are the spore spreading parts. P. canina is not as fussy about moistness, so is found in drier spots, and can grow on burned or rotted wood.

All Peltigera species are very important to the forest ecosystem. They are nitrogen fixers, enabling other plants to grow. P. aphthosa was also found to absorb the aluminum and silicon released from Mt. St. Helens as ash during the eruption.

If you’re as fascinated by Peltigera lichens as we are, the Provincial Museum of Alberta produced a 64 page guide to all 23 species in Alberta. You can read it for free here.

Find out more about the fascinating fungi of K-Country here!