Part 1 of this series introduced the concepts of Leave No Trace Canada, and noted the 7 principles of Leave No Trace. On other pages, we cover Planning Ahead, Travelling on Durable Surfaces, Proper Waste Disposal and Leaving what you Find. The fifth of these principles is “Minimize Campfire Impacts”.

Campfires and the outdoors are connected with each other. For many people, it’s hard to envisage being anywhere without lighting a fire. We know folks who light one every time they hike, even though they don’t use it for cooking (the odd hot dog is burned on it occasionally). 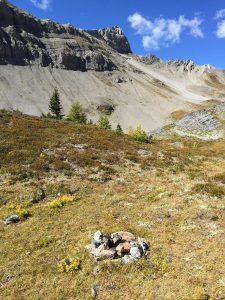 When you think about it, campfires aren’t particularly useful or environmentally friendly.

Stoves have none of these problems.

But despite the benefits of camp stoves over fires, many people still have fires. Some believe fire is a predator defender, keeping away bears (not true) or mosquitos (jury’s out). Some just like to sit around them, or enjoy the warmth you just can’t get by huddling around an MSR WhisperLite stove (which are also hard to roast marshmallows on). And so, some make the decision to have a campfire.

I want to build a fire! 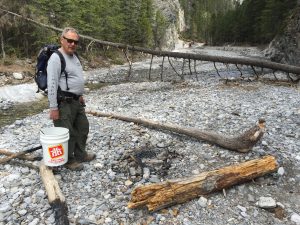 The most important consideration to be made when deciding to use a fire is the potential damage to the area where you are. One study showed 46 million Americans camp each year, and 73% of those camp within 400 m of their car. To Leave No Trace means that you need to think about those thousands coming next. Using fire pits or rings that are provided. Don’t collect wood or forest floor debris where it is not permitted. That usually means bringing a fire starter, such as cotton balls coated with Vaseline (which are very effective, and light with just a spark even in the rain) rather than collecting twigs.

Even in the Public Land Use Zones or Wildland Parks, where collection and burning of deadfall is permitted, careful selection of that deadfall is important.

Look to see if there sufficient wood where you are so its removal will not be noticeable. Some popular random backcountry camping areas of K-Country, like Picklejar Lakes and Carnarvon Lake, have been denuded of deadfall by the number of random campers there over the years. In these areas, live trees are being cut. Here’s a hint: live trees don’t burn very well at all.

How to select a campfire location 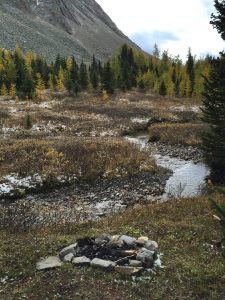 If you’re in a place where you can only have a fire in a fire ring, such as a Provincial Park or Provincial Recreation Area, you must use the fire rings provided. The picture to the right is an illegal fire ring in the backcountry of Peter Lougheed Provincial Park.

If you’re in a Wildland Park or on Public Land, you need to pick a spot for your fire.

The selection of a place to have your fire is important. A lot of people build (and leave behind) rock rings, but that’s actually a poor strategy. 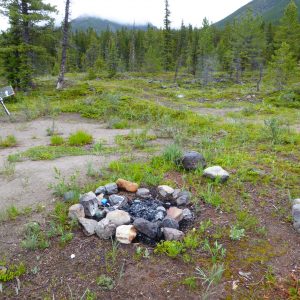 If you do make a rock ring, it’s really important to scatter the rocks when you’re done and not leave them for everyone coming after to see. We regularly volunteer with Parks to go and break apart fire rings people leave behind in K-Country (they leave a lot of them). All of the photos in this article (including the one at the top) are of backcountry fire rings (most illegal) taken while doing just that kind of clean up work. Many are filled with partially burned trash, like the one to the right.

If you arrive at a spot where the folks before you built a fire and left a permanent mark, it really is probably best to just re-use it. And when you’re done, you can make things better by getting rid of ALL evidence: yours AND theirs.

Oh, and… skipping the rock ring and building directly on on a rock outcrop is a poor strategy. Again, the rock will end up with a permanent black mark, and you’ll kill the thousand-year-old lichens clinging to the rock.

Use Mound Fires, not Rock Rings 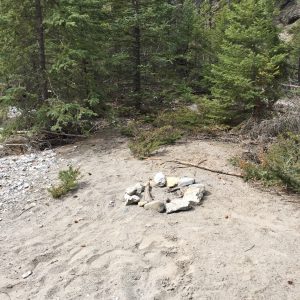 FAR better than a rock ring or building on bare rock is a mound fire. Basically, you build up a mound of mineral soil about 4” tall, and build your fire on that. Get the soil for the mound from an existing disturbed part of ground. Earth exposed in the hole created by a fallen tree is perfect (and we have a LOT of fallen trees in K-Country to choose from). Another great place to get the soil for the mound is the sand from a dried up creekbed.

Alternately, you can build on an already bare patch of mineral soil — if you’re certain there’s nothing under it. The soil mound insulates the ground so you don’t start an underground fire. When your fire has burned down to ash, the ash mixes with the soil and fertilizes it. You can use the dirt from the mound to bury the fire remnants, so need less (or maybe even no) water to extinguish it. The now nutrient rich soil is easily spread, and the plants under the little soil that remain after you’ve spread it can grow right up through it. The photo above right is of a mound fire (unfortunately surrounded by an unnecessary rock ring. They came SO close to doing it right).

Tips for the actual fire 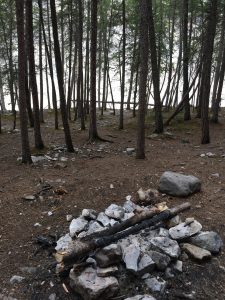 With backcountry campfires, it’s critical to keep fires small and burn them entirely down to ash rather than putting them out while they still look like logs. Those partially burned up big logs like the ones pictured at right? They basically will never break down; the carbon won’t let water in to rot what’s left of the log. That’s why you can see evidence of burned trees in recovering forest fire locations for hundreds of years.

A great rule is that if you can’t break the wood by hand over your knee, it’s too big to burn.

Do you have leftover wood? Don’t pile it up: scatter it. You’re not leaving a place natural by leaving a fire ring and pile of wood in that random campsite.

Again, camp stoves have none of these problems. They’re light, dependable, fast, efficient, good for the environment, and really do Leave No Trace. But if you insist on having a fire, it’s not that hard to leave no trace with those, too.

<– Back To Leave What You Find