There is Public Land, and there is designated Park land. For Parks and Protected Areas, there are 7 land classifications, 4 of which you can find in Kananaskis Country:

We’re going to cheat a little bit on this page, in the interest of education, and talk the Kananaskis DISTRICT instead of just Kananaskis COUNTRY. We’re not going far. The area we’re going to cover almost borders K-Country, but isn’t technically inside it. It is still part of the Kananaskis District for management purposes. This deviation is to cover another land classification: “Natural Areas”. First off: what’s a Natural Area?

Section 7 of the Public Lands Act enables the Lieutenant Governor in Council (“LGiC”) to set aside lands for use as:

So a Natural Area is a land use designation, like a Provincial Park.

Natural Areas are governed by the not-so-simply titled “Wilderness Areas, Ecological Reserves, Natural Areas and Heritage Rangelands Act” (which we’ll shorten to “WAERNAHR Act”, if that’s any help). Section 4.01 of that Act enables the LGiC to designate public lands as Natural Areas that meet the following purposes:

Section 5 of the WAERNAHR Act gives direction to the Minister four “programs and measures” they can carry out in a Natural Area:

Despite the latter clause, trapping and hunting is permitted in a Natural Area. Natural Areas can also have grazing rights granted on them. Interestingly, though the WAERNAHR Act enables regulations to be written that support the Act, none have been. This leaves things normally covered by regulation (like camping rules) up in the air. 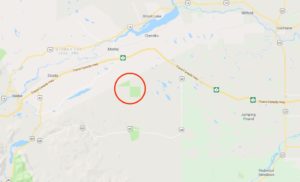 These days, the official Kananaskis Country website says there is one Natural Area in K-Country They’re probably referring to OBMNA (a click on the link on that page takes you to a list of EVERY natural area in the Province, so isn’t clear which one they’re referring to). But… the OBMNA is not actually inside the maps that show the K-Country boundary on them. Technicalities, we suppose.

Where did it come from?

The OBMNA came into being through Order in Council 454/71 (yes, 1971, pre-dating K-Country by almost a decade). It has been there for over 50 years. It’s not very big; just 356 ha (882 acres). OBMNA was #54 of over 80 Natural areas created by Order in Council 454/71. You can see a little more about OBMNA on the official Alberta Parks Land Reference Manual page here. It is described as follows:

Ole Buck Mountain Natural Area is a rolling, hilly site, slightly incised by creeks and gullies. It is mainly forested by a variety of mixed wood stands of aspen, balsam poplar, white spruce and lodgepole pine.

No, we have no idea what most of that latter paragraph means. No, despite asking, we’ve not been able to determine why it got the Natural Area designation. We have our guesses, which we will get to below. 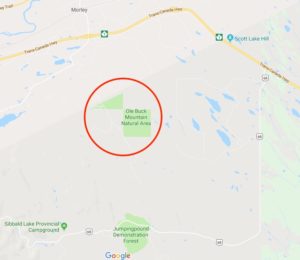 Zooming into the location at right, the OBMNA is not too far northeast of the Sibbald area, due north of the Jumpingpound Demonstration Forest. The OBMNA has two adjacent parts; a small triangle on the west side, and a square-mile (one section) eastern block.

You’re going to have to take the above description of what’s in the OBMNA on faith, because we haven’t been there — despite trying for 4 years. This is the only page describing the elements of K-Country where we can offer no photos from the area. We doubt you will get there, either. The issue is accessing it legally.

The OBMNA is about as isolated and secret a place as you can find in Kananaskis. It’s “isolated” in the sense that you can’t get to it without getting permission from someone, despite being visible from the TransCanada Highway. It’s “secret” in that there are no signs directing you there. If you could figure out a way to get to it, we’re betting it’s not marked when you get there, either.

On the north side of the western portion, and the entire west and south sides, the OBMNA borders the Stoney Indian Reserve. The road leading to and through the OBMNA is a private road on the Reserve. You need written permission from the Band Council to us it. The road dead-ends just south of the Natural Area, and it has residences along it. 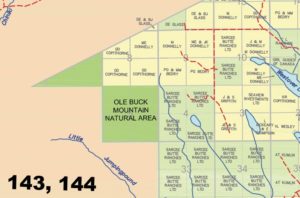 To the east of the OBMNA (and the small bit north of the eastern portion), the land is a mix of private land (yellow) and Crown land with Grazing Leases (light green). All are within the Municipal District of Bighorn. The MD’s land map for the area is at right. This means you need written permission from the landowners, or direct permission from the grazing lease holder to cross their land to access the OBMNA. That is required even for the leased Crown land pursuant to Section 5(1) of the Recreational Access Regulation.

Under that regulation, the lessees of the Crown Land aren’t obligated to let you cross if there are livestock or crops present. If you want to try, here’s a link to the province’s Grazing Lease look up tool. It will tell you who you have to contact to gain recreational access on any Crown land with a Grazing Lease in the province.

We started trying to contact the area’s Grazing Lease holders in January 2018 (conveniently, you can only call them during a 90 minute window, only on Wednesday nights, and at least 7 days before you want access). Multiple messages were left over several weeks, before we finally made contact in May. That resulted in us being told cattle are on it annually from April until October, meaning summer access was never possible. We had hopes of trying for late October 2018 (yes, during hunting season, though not to hunt), but were not allowed. 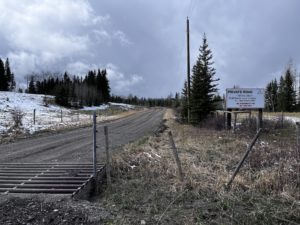 On top of that hurdle, the roads that come closest to the OBMNA to the east are not public. They are private well roads owned by Shell. You need to have permission or a road use agreement to drive on them, or even walk or bike on them. Local ranchers and the grazing lease owners do have that permission. However, they can’t give it to you. The closest you can legally approach the OBMNA without any permission is about 8 km away, unless you drive through the Stoney reserve. You can barely see the OBMNA from there; we tried. The sign to the right is the closest you can get.

So, in short, “you can’t get there from here”. Just to get to the OBMNA, you need:

You could try using a helicopter — except you can’t land an aircraft there. Park’s own website says in big, bold letters:

There is no public access to this natural area from park or Crown land.

If you can’t come in by air, what’s left; tunnelling?

Our guess as to why that splotch of land got a Natural Area designation is that it was isolated Crown land that could not be accessed.

In 1886, a rancher named John Robinson held this small chunk of what was then just public land under a Grazing Lease. It was not forested then. In the mid 1920’s Robinson relinquished the lease. It didn’t have a Grazing Lease on it for 50 years; the forest grew in naturally and it became awful for grazing by the 1970’s without substantial tree clearing. As an undevelopable island, rather than just leave it as undesignated Crown Land, it was given a protected status. This is typical of other Natural Areas we have looked at: small, remnant, difficult to access “natural” spaces. 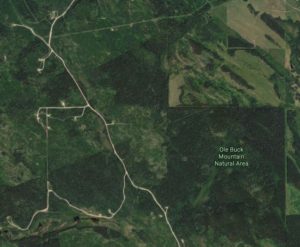 The satellite imagery at right shows houses have been built within the western section of the OBMNA. We suspect they pre-date the land being designated (the roads do). But we have no way of telling, nor do we know what this does to the land designation status. It’s also possible the houses and roads were built after 1971 by Stoney Band Members.

Logging has occurred on the Stoney Reserve lands right up to the western boundary of the OBMNA. Our understanding is that they accidentally logged a small portion of the western portion OBMNA as well before being stopped.

Members of the Copithorne family have the grazing rights, in part or in whole, to most of the land on the eastern side of the OBMNA. The Copithornes started homesteading in the Jumpingpound area in 1888. It was in the 1970’s that then-Minister of Transportation Clarence Copithorne was one of the original visionaries involved in the creation of Kananaskis Country as we know it today. We spoke with Clarence’s son, Roy Copithorne; he kindly gave us the land’s history, and told us only hunters ever access the area.

“Natural areas are protected area lands that have been set aside to support a broad spectrum of recreational activities.”

And of course the WAERNAHR Act says Natural areas are there “to maintain that land or those features in a natural state for use by the public for conservation, nature appreciation, low intensity outdoor recreation or education, or for any combination of those purposes“

This is one Natural Area that probably only sees a handful of local residents using it for any activity in any year, including members of the Stoney nation – hardly a “broad spectrum”, for any “purpose” whatsoever. The Stewards of Alberta’s Protected Areas Association data available here on the area suggests that there was at least one person acting as a Volunteer Steward for the OBMNA in 2002, 2003 and 2011; we couldn’t find out who. But other than that… we’re not sure if the “nature” there is “appreciated” by anyone at all.

Our attempts to learn about the OBMNA started with a conversation with a Conservation Officer in 2016 who’s responsibility area included the OBMNA. His message at the time was prophetical: “Good luck with that”. Good luck to anyone who wants to try out the “broad spectrum of recreational activities” in a place that is literally impossible to get to.