Kananaskis Country is home to the most easterly glaciers in the Rockies. Several of them are quite accessible to mere mortals like us. In this two part series, we’re going to look at K-Countries many glaciers, and describe two that you can easily get to.

Glaciers can be dangerous.

They can hold features like crevasses and bergschrunds and seracs that can readily kill you. They commonly are in places where avalanches occur. Some things that look “solid” are in fact rock on ice on a lot of air. Such bridges can collapse at any time.

There are “safer” times to visit them, and “safer” glaciers to visit, but no glacier is truly risk free.

By our count, there are at least 11 named glaciers in K-Country, and we’re probably missing some. There’s the French/Robertson/Haig/Smith-Dorien complex, which probably at one time was just one big icefield. There are stand-alone glaciers such as Lyautey, Mangin, Petain, Beatty and Northover. And there are small remnant glaciers like Old Goat and Rae.

The Haig glacier is K-Country’s largest glacier, and home to the Canadian Olympic Development Association’s summer cross-country skiing training facility. Yes, way back in the back-country is parked a track setter and groomer. It’s used only during the summer to maintain ski trails on the Haig Glacier. It’s a tough place to visit, though, as the closest place you can practically hang out to watch is the Turbine Canyon campground, a 15 km hike from the Interlakes Day Use area. From there, it’s an additional 2.8 km, past the CODA cabin, to the access point for the glacier.

There are two readily accessible glaciers in K-Country. You don’t have to be in as good a shape as an Olympic athlete to access them. The first is the Old Goat Glacier, the second is the Rae Glacier. Old Goat and Rae vie for the title of “most easterly glacier in the Rockies”. Rae is geographically farther east, but geologically, slightly west of Old Goat.

Getting to Old Goat Glacier

Old Goat is accessed by a hike on an unofficial trail of about 5 km, gaining ~500 m, from the Spray Lakes West road. Like all unofficial K-Country trails, the trailhead is not marked. It’s across from Spray Lakes West campsites 16/17. There’s a small parking lot just before the trailhead maintained for hikers. In the last few years, there have been several closures for bears, so check albertaparks.ca for warnings before you go. 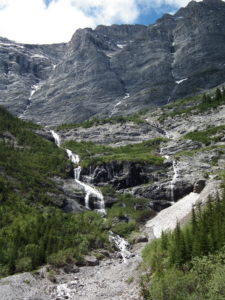 The first section of the trail is quite nice in a pretty creek valley and some flood-damaged bits. You arrive at Old Goat Falls after 3 km and a 140 m height gain without much work – save the last 400 m across a boulder field created by the flood.

This falls is the meltwater from the glacier. It changes water volume throughout the day. It dries up in August (or a bit earlier) depending on everything from past winter snow to summer temperature. The waterfall is visible from the Smith-Dorien near the Driftwood Day Use Area if you want to see if it’s flowing before you head up.

To get to the glacier from the waterfall, head up the trail in the scree slope well to the left of the waterfall. In 2 km, you’ll climb the next 360 m; it’s steep and in poor shape. Bring poles for the ascent and descent. But it leads up through the home of pikas and marmots, making it an entertaining climb.

Make the top and you’re still a 1 km walk along a moraine to get to the glacier itself.

The glacier itself isn’t very big. Most of it is covered in rock. This is pretty normal for the remnant glaciers in this area. Depending on when you go, it could be covered in snow (June or early July) or just be ice (late August or September). 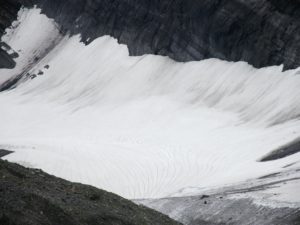 Like all glaciers, it is in motion, and visibly so. There are lines of flow clearly visible. You can see them in the photo on the right. All glaciers are moving ice (or its not a glacier). The ice is always, always moving forward. Glacial recession occurs when it is melting back faster than it is moving forward. The ice moves because snow collects in an accumulation zone. You can clearly see Old Goat’s under the peak of Goat Mountain. The snow packs up, turns to ice, and the ice’s weight causes it to slide downhill. 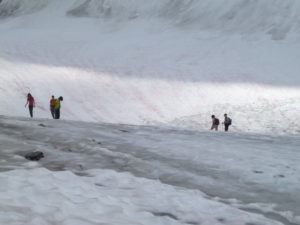 You can stop at the first overlook of the glacier. Alternately, go another ~2 km and 200 m vertically up from here to a point where you can climb up onto the glacier itself. You’ll find most of that white stuff is not snow, it’s ice. Ice is slippery; cleats are recommended, and be careful where its slightly steep near the toe. Watch for fractures anywhere there is water.

You might find the snow pink in spots. That’s “watermelon snow” – snow covered in a single-cell algae called chlamydomonas augustae. 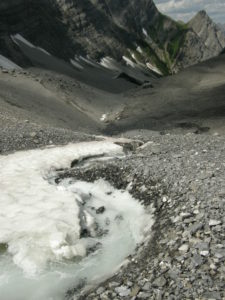 You’ll also find water coming out from under the glacier through what looked (from a distance) like just scree but is in fact a thin layer of scree on top of solid ice (pictured at right). Much of the valley you’re walking in is actually scree on ice. The glacier itself is much bigger than it looks.

All glaciers sit on a layer of water, kept liquid because of the pressure of the ice above despite sub-zero temperatures. So all glaciers “leak” at the toe into a creek, and the creek flows all the time, though more so when it’s hot.

Looking around in the valley, you can see other glacial features. They include:

There are also some fossils up here. This is not surprising. The glacier sits on the Sulphur thrust so has fossiliferous Mount Head exposure, which you can read about here.

So long as you stay near the toe and don’t head up there prior to June, your risk in visiting Old Goat is pretty low. There are no crevasses down low (except near water). Unless you head all the way up to the accumulation zone – for which you would need crampons, and there’s a rather nasty bergshrund that could eat you – there’s limited avalanche risk in the summer. Back-country skiers do ski this glacier in the winter, and we know someone who skis it at least once a month, every month of the year. In fact, you can even read here how Old Goat was the scene of the world’s first commercial heli-ski day led by Hans Gmoser in 1963.