Living and recreating safely in bear country means understanding many things; from signs that bears are around, thru to what to do in a bear encounter. As we wander in the wilderness (or even in town sites) we are travelling in a bear’s home: their living areas, dining areas, and even their bathrooms. Recognizing food that bears are currently eating can help raise your awareness of the possibility that bears are around where you are at any given moment.

Late-July into mid-August is berry season! When it comes to berries, of course we endlessly talk of shepherdia, and that’s an absolutely prime source of berries for bears. Some years have a bumper crop of shepherdia – but what if it is a poor year? There are places in K-Country where there are a LOT fewer shepherdia bushes, or where the berry crop just isn’t as good. If you’re a bear living in that space, what berries do you eat? 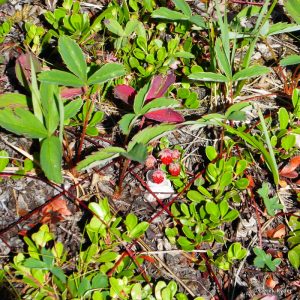 Well, one berry you DON’T eat are strawberries. Why? We know strawberries are delicious and sweet. Why do bears NOT eat strawberries?

The simple answer is “density”. Anyone who has walked through an alpine meadow can find lots of strawberry plants, but there just aren’t a lot of berries. Bears are eating 200,000 shepherdia berries a day to get the calories they need at this time of year. Anyone who has gone wild strawberry hunting knows Mr. Bear would basically have to lick square miles of ground to find that many strawberries – and he still probably wouldn’t get that many. So while strawberries are tasty, bears just don’t bother, since they’re too much work for too little reward.

But raspberries… ooh, wild raspberries (rubus idaeus)… now THERE’S a berry bears love — and the research say many bears like them more than shepherdia. Members of the rose family, and very prickly, but the bears don’t care about the prickles; their lips and tongues are tougher than ours. Raspberries tend to grow in patches of a dozen or more plants. 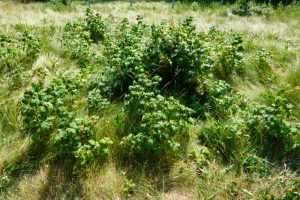 With raspberries, year-old, yellower-leafed canes are FAR more productive for berries than new green canes. Each year-old, berry-bearing plant can have a hundred or more berries. This means that a patch could contain 5-10 kg of berries if you got them all. More nutritionally dense than shepherdia, bears don’t have to eat as many raspberries, but their needs are still on the order of 30-40 kg of raspberries a day (and the more the merrier). Find 8-10 patches a day, and bears are happy – and 10 patches are easy to find in the right areas. 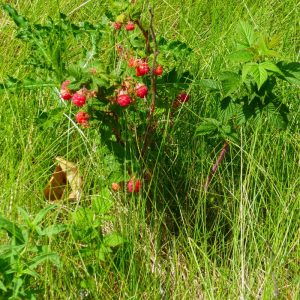 Research done in the mid 1980’s in the Sheep River area (by collecting scat and analyzing it… fun job) showed that wild raspberries form a significant part of the diet for the black bears in that area. Raspberries in 1984 at this time of year were in almost 40% of bear scat; shepherdia was only in about 30%. In 1985, raspberries had ballooned to almost 55%; shepherdia was below 10%; the data suggests that wasn’t a great shepherdia year. You can read the research paper on it here.

Wild raspberries like disturbed ground and gravelly soils, so (just like dandelions) often grow along roadsides and where people are. We are aware that most accessible patches in the Bow Valley, including around Harvie Heights and Heart Creek, are dined on annually. Raspberry patches also surround Quarry Lake (where the raspberry pictures accompanying this article were taken) and on the power line, which often creates conflict issues when the bears move in to get them (and they do most years). But you will also find wild raspberries in stony meadows at higher elevations, and the grizzlies are good at finding them, too. 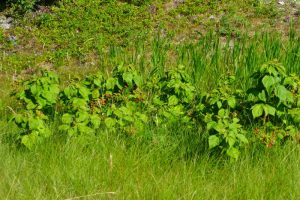 While people have been eating (and cultivating) raspberries for a long time, the leaves are also of interest. If the leaves are fresh and green, they can be made into a tea, but avoid using wilted leaves as they can be toxic. Some sources purport that raspberry leaves contain compounds (including “fragarine,” identified and named in 1941) that have stimulating effects on the muscles of the uterus, so raspberry teas have been commonly used for centuries before, during or after childbirth. It’s real efficacy remains unproven, however.