Kananaskis Country leaks. It really does. Water pours in from places known and unknown, and pours out in some of the great rivers of North America. But where does all this water come from?

The source of some of the water

A lot of water comes from snowmelt. And it takes a LONG time for spring to come; “Spring Run Off” peaks in mid-June at Bragg Creek for the Elbow River, and the same is true for the Bow River at Cochrane. At the Little Elbow Summit snow pillow station, having snow to the beginning of July is common. About 50% of the time, snow stays at the Three Isle Lake snow pillow until mid-July. Snowmelt is a big contributor to river flows.

If snow is one contributor, then rain is another. Have you noticed it rains here, especially in the spring? We locals call it “June-soon season”.

Data on snow, rain and river flows is readily available at Alberta Sustainable Resource’s site that you can get to through this link. Look at the Bow River sub-basin; then select, either: “Snow Data”, “River Flows and Levels” or “Meteorological and Precipitation Data”. 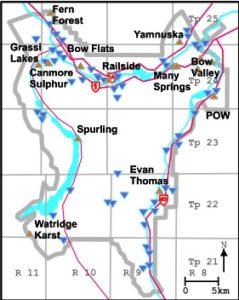 K-Country has one other source of water that’s harder to measure and even harder to understand: natural springs. K-Country is full of places where water just leaks out of the ground for no apparent reason. The Bow Valley is home to 40 documented springs, Spray Valley 9, and the Kananaskis Valley 26, and there are many more springs in the Sheep and Highwood areas. The map to the right shows just some of them. Clearly, that water has to come from somewhere, but just where can be quite the mystery.

Take Spurling Creek, near the West Wind Pass trailhead. The creek is always flowing. If you walk up the weak trail beside the creek from the Spray Lakes Road, about 100 m up from the road you’ll see water just coming out of the hillside, pictured above, in excess of 9 l/min all year round, and at a constant 3.5° too. Why? Where does the water come from? Logic would tell you that the water comes from above. Look up all you want; up on the flanks of Mt. Lougheed all the way to the top of the Windtower. No lakes, creeks, or water of any sort are there provide a year round source of water at a constant temperature and flow rate. 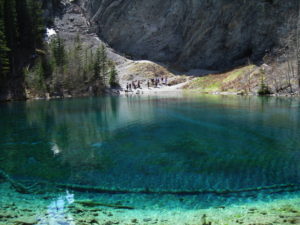 Maybe the water from Spurling Creek’s spring comes from below, pushed up under some kind of pressure. Look across Spray Lakes Road and down about 200 m. That is Spray Lake, but if that’s the source of the spring, how does the water get pushed up 200m? It’s unlikely, too, given that Spurling Creek’s springs were found long before the lake was created by damming. The spring’s source is simply unknown.

Take Grassi Lakes. These lovely azure blue lakes are the upper-most expression of a series of springs that total 600 l/min and make up the pretty waterfall on the Grassi Lakes Trail. No, the water doesn’t leak out of the dam above; Grassi Lakes and falls have been here a lot longer than TransAlta’s hydro system. 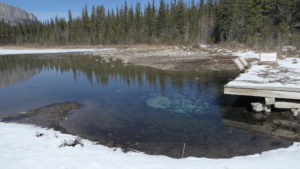 Bow Valley Provincial Park was created in part to protect the spring complexes. Go for a walk along the aptly named Many Springs trail. This pleasant and easy little trail will take you by many wood lilies in the fall along boardwalks to a very pretty lake with Mt. Yamnuska as a backdrop, pictured at right. This variably-sized lake (thank the beavers who like to dam it, and Parks staff who remove the dams lest damage occur) is surrounded with about 30 places where water just bubbles up out of the ground, though most of the water comes out of just 3 spots. It keeps the ice on the lake thin or not intact on even the coldest of winter days, because the water is always the same basic temperature, around 8°.

A LOT of water shows up here. Up to 9,000 l/min flows in the summer, making the complex of springs here one of the the largest in K-Country. One of the sections is called “the Boiling Springs” because the water spews out of the ground with such force it looks like it’s boiling.

Where does this water come from? One suggestion is that it is deeply circulating waters in fractured bedrock associated with the McConnell Thrust Fault. Another idea is a connection to a regional buried valley aquifer (“the Calgary Buried Valley”) that allegedly runs under the center of the Bow Valley. It’s supposedly a remnant, water-filled, glacial melt-water channel. But no one knows for sure, even though it has been studied at least 3 times.

Water leaks out of the ground in the spring-fed Middle Lake complex in the park as well, plus up at Willow Rock Campground along the Flowing Waters trail – where water comes out of the ground at a constant 2°, which is strangely 5° colder than Many Springs. 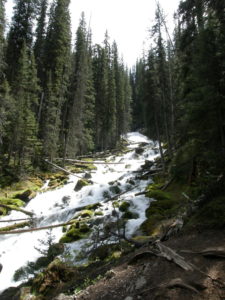 But then there’s Karst Spring. Down the old Watridge lake fire road from the Mt. Shark parking lot, this spring belches out an average of 30,000 l/min of water out from a small hole in a hillside – peaking at 200,000 l/m in the spring! All that water at a basically constant temperature has made for a hugely lush dark forest that makes getting pictures of the spring difficult. It’s a really fun place to visit on a really cold day in winter as even though the path to the springs overlook from Watridge Lake can get icy, all that warm “water” prevents ice and snow from sticking around on the creek itself.

Believe it or not, in an effort to find out where this water comes from, no fewer than 4 individuals have donned SCUBA equipment and tried to “dive” into the springs and find the cave from which it flows. The deepest cave diver made it 125’ down before the power of the flow and the small space made it impossible to continue. Why would anyone do this? Well, because where there’s that much water there’s usually a cave system, and cavers want to know.

In 2021, researchers Dr. Masaki Hayashi and Sara Lilley from the Department of Geoscience at the University of Calgary set out to find out where the spring’s water was coming from. Their research showed that the springs are the exit point from a large, elongated oval basin of tens of square kilometres extending southwards from the spring. The basin includes water that infiltrates from the meadows of Burstall Pass and the area under the Birdwood Lakes. It even includes areas under Mt. Sir Douglas.

To prove this, in September 2021, Ms. Lilley injected a tracer dye into a sinkhole below the glaciers on Sir Douglas in Banff National Park. The dye showed up at Karst Spring, 14 kilometres away, in just 4 days!

Other really interesting springs in K-Country include:

There are the countless springs elsewhere in the mountains; most every valley from Rummel to Pocaterra feature ponds or streams that just appear out of nowhere.

Natural springs present an endless source of wonder and mystery about geological processes, including mysteries that may never be solved. K-Country plays an important role in protecting our precious water resources, in part because of the amount of mystery associated with where that water even comes from.