With about 100,000 of them in the province, Mule Deer (Odocoileus hemionus) are the most common large animal you are likely to encounter in K-Country. Mule Deer numbers peaked province-wide in the 1950’s at over 150,000, then fell to less than 60,000 in the 1960’s due to severe winters and heavy hunting. They have stabilized in the last decade.

With high numbers comes high predation; cougars, wolves and grizzlys target them – even coyotes, lynx and bobcat will give them a go. In October 2020, a lynx took down a female Mule Deer in the Tim Horton’s Children’s Ranch parking lot. A full grown male cougar needs to take down a Mule Deer every 4-6 days.

There are 7 sub-species of Mule Deer. The species here is the most commone one, the Rocky Mountain sub-species. It is found from northern Arizona to Yukon near the Alaska border, and from the central plains to the Coastal mountain ranges. 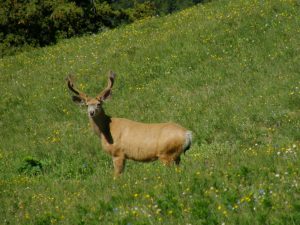 Muleys actually change colour with the seasons. Their coat is a reddish brown in the summer (like the photo to the right), and a dull gray in the winter. They are quite gentle and often easily approachable. When encountered in the forest, they will stay stationary and check you out until you are “too close for comfort”, then suddenly turn and bolt.

Ever seen a pronk?

While their gait can look typical – they walk, trot and gallop – they also bounce along on all fours in a gait known as “stotting” or “pronking”. This is an energy efficient and very safe way to move quickly through a dense forest covered in deadfall. If they run away from you, keep watching; they often pause to “shoulder check” to see if you’re chasing them.

We see more of them in the winter when they forage on twigs, especially willows, and other woody vegetation. The summer diet is grasses and forbs (a technical term for flowers and similar buds), and they are especially drawn to areas of new growth created by fire or by logging. They have no “home”; they just bed for the night in a grassed area, leaving little depressions in the snow in the winter. A dead giveaway that you’re looking at a Mule Deer napping spot in the winter is that they invariable pee as soon as they arise, often in the space where they slept. Elk and White-Tail deer rarely do that. 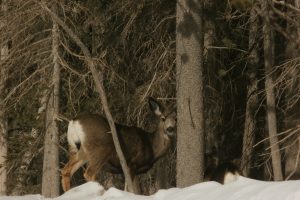 They are differentiated from their cousins the White-Tail in a few ways. The tail of a White-Tail covers the white bum patch; the Muleys always have a white showing, tail up or down. A White-Tail’s tail is wide and fuzzy; a Mule Deer’s is narrow and rope-like and ends in a black tip. And the antlers of the males branch differently; white tails come forward, mule antlers split in twos. But most obvious are the Muley’s canoe-paddle sized ears, which are always rimmed in black.

A family unit, sort of

Mule Deer mate in the fall. Unlike elk, males do not build harems, rather just mating with any and all females they can find. Females give birth, normally to twins, in May or June, but they can give birth as early as March or as late as November. The fawns lose their spots in time for their winter gray coat. Mule Deer don’t generally move around in herds of more than 4-6. Even larger “herds” are just loose family groups of females and their young from this year or last.