K-Country is home to almost 20 species of butterflies. Summer is butterfly season, so here we will look at the biggest and most obvious of K-Country’s Lepidoptera, the Mourning Cloak (Nymphalis antiopa). 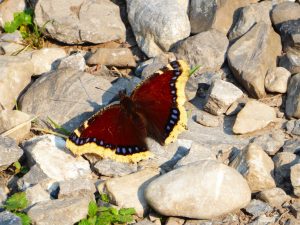 This butterfly is very wide ranging, and can be found across North America and Eurasia, into northern South America, and even Japan. They prefer cold, mountainous areas, are protected by law in Switzerland and Austria, and have special status in the Czech Republic. They are known as Mourning Cloak almost everywhere; this name came from the view that it looked like a girl who, disliking having to be in mourning and wearing dark clothes, let a few inches of bright dress show under her cloak. Matching its Mourning Cloak name, it’s easy to identify: dark brown, almost velvety wings, bordered by a line of blue dots and an edging of yellow. However, in Great Britain, it’s been called the Camberwell Beauty since 1748, after the first sightings in Camberwell, south of London. 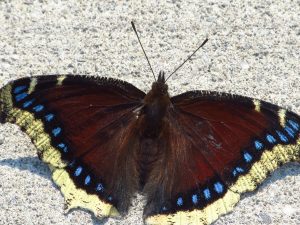 We talk about summer being butterfly season, but in fact, this is not a butterfly you’re likely to see a lot in the summer. They’re out in great numbers in the spring, as they are non-migratory in K-Country. Instead, they overwinter as adults, tucking themselves under the bark of trees or in tree cavities while in winter hibernation – in their case, using “cryo-preservation,” filling their veins with a thick sugar syrup that can’t freeze. In the early spring, they will sun themselves (on rocks, or even on roads), using their dark wings to absorb the sun’s warmth. But… they can also shiver, just like us, and raise their body temperatures by 5-10 C° in a matter of minutes. 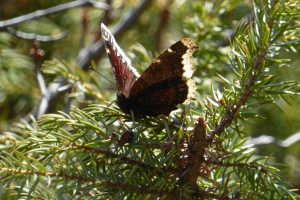 But uniquely, they hibernate twice a year. When temperatures turn hot and the air turns dry in the summer, they can go into a summer hibernation known as aestivation (your new “Word of the Day”). Mourning Cloaks that live on higher mountains in cooler, wetter places, may not need to aestivate, and may stay active.

And if aestivation isn’t neat enough, they also exhibit diapause (“Word of the Day” Number Two!). This is an entire suspension of development and growth, triggered by environmental conditions. So their eggs can stop developing, or the caterpillars can stop eating and maturing, or the pupae can just stop the transition into a butterfly. When September comes around, all of these life cycle processes just start back up again. They literally have the ability to hit the “snooze” button at every stage of their entire life. 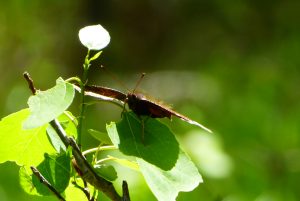 We think of butterflies as pollinators, but Mourning Cloaks really aren’t. Their primary food isn’t pollen, it’s sap from aspen and poplar trees. They are rarely seen nectaring on flowers, preferring the sugary residue of fallen fruits and aphids. Their caterpillars primarily eat the leaves of willows, wild roses, alders, birches and poplars.

They get predated by birds, frogs and other critters, so, uniquely, they have defence mechanisms (other than just folding their wings and looking like tree bark, which they’re good at). They’ll group together and fly at attacking birds. They can make a loud clicking sound when they flap their wings. 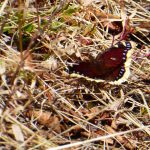 Mourning Cloaks are another K-Country critter that benefit from fire. In their case, fire opens up the forests, making it easier to fly around, and enables the spread of the deciduous trees they depend on for survival. Mourning cloaks generally set up a territory of up to 1 km square, but are quite capable of flying long distances.