Many mountains in K-Country are named after famous people, places or things.

Mt. Buller is located on the east side of the Spray Valley at the south end of Spray Lake. It sits on the dividing line between Bow Valley Wildland Provincial Park and Spray Valley Provincial Park. The High Rockies Trail runs across its flanks, just above the Smith-Dorian/Spray Road. There are avalanche paths on Mt. Buller than occasionally slide in the winter and are controlled by Kananaskis Public Safety, resulting in occasional road closures. These paths can be seen in the photo above.

Mt. Buller is named for Lieutenant-Colonel Herbert Cecil Buller, DSO, who was born in 1881 in England.

Who was Herbert Buller?

Buller was the son of a British Admiral, Alexander Buller. He joined a British Rifle Brigade in 1900 at the age of 18. When World War I broke out, Buller was serving on the staff of the Duke of Connaught, who was then Governor-General of Canada. In this role, Buller was serving with Lt. Col Francis Farquhar. Farquhar also has a mountain named after him in K-Country; you can read Farquhar’s story here. In 1914, Buller accepted an offer as lead Adjutant for the privately founded Princess Patricia’s Canadian Light Infantry (“PPCLI”). The PPCLI was named in honour of Princess Patricia, daughter of the Duke. Farquhar had simultaneously been appointed the PPCLI’s first Regiment Commander. The Patricia’s became the first Canadian regiment in the field when they landed in France in December 1914. The PPCLI has served Canada continuously for more than 100 Years.

Farquahar was killed in March 1915, and Buller was appointed PPCLI Battalion Commander in his place. Buller was wounded during the 2nd Battle of Ypres in Belgium in May 1915, and lost an eye. He was awarded the Distinguished Service Order (DSO) for his handling of the regiment during the battle. As a result of his wound, he was sent back to England for convalescence, but returned to Belgium in December 1915, once again being appointed Battalion Commander.

Buller was killed on a small hill called Mt. Sorrel in the Battle of Sanctuary Wood on June 2, 1916. According to Lord Beaverbrook’s Canada in Flanders (1916), Buller “possessed one of those fearless and impetuous natures which made him the fitting commander of a famous regiment and brought him the soldier’s death he would have desired.” Today, there is a substantial Canadian monument on Mt. Sorrel, pictured at right. Although the forest has re-grown, the Sanctuary Wood area remains much as it was at the end of battle in WW1, with remnant trenches and shell crump holes littering the surface. 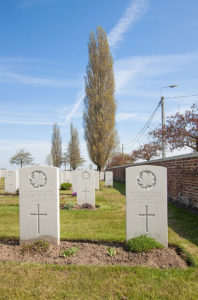 Buller was buried next to Farquahar in Voormezeel Cemetary #3 not far from Ypres. To the right is a photo of their two headstones. We thank WW1Cemeteries.com and photographer Werner Van Caneghem for granting us permission to use them. You can see other photos of the cemetery, including other photos of Buller’s and Farquhar’s headstones here.

The official Alberta Parks and PPCLI commemorative plaque to Buller, pictured below, can be found in the parking lot of the Buller Mountain & Pond Day Use Area on the Smith-Dorien/Spray Road. It contains some information on Buller in both official languages. 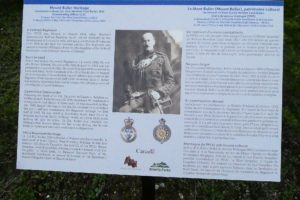 There is also a bronze plaque on the true summit of Mt. Buller. The cairn and plaque there was erected by 14 members of the 3rd Battalion of the PPCLI in 2014 to commemorate the 100th Anniversary of the founding of the PPCLI. It’s pictured below.

Buller is also commemorated in several other places:

In 2016, the PPCLI Foundation, together with the Calgary Health Trust, raised funds by scrambling to the summit of Mt. Buller and hiking to Buller Pass. The event raised funds and awareness about post-traumatic stress disorder. You can read more about that event here.

You can read more of the service of Lieutenant Colonel Buller at Veteran’s Affairs Canada’s Virtual War Memorial page here.