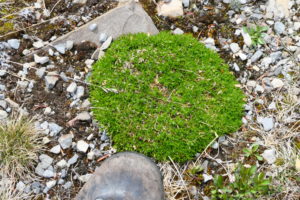 You’re in the high alpine. You see a circular, bright green, moss-like, cushiony blob looking a bit like a green Star Trek tribble, only with little tiny purple flowers. Meet Moss Campion, silene acaulis, a fragile, slow growing denizen of the lofty heights of K-Country – and almost every other artic-like region of the earth, including Siberia, Eurasia as far south as the Alps and the British Isles. 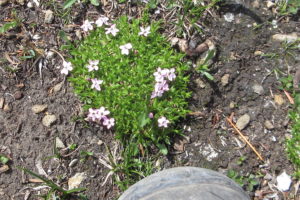 Superbly adapted for cold, rocky and windswept areas, it grows up to 18” in diameter but is rarely more than 2” tall. It hugs the ground to retain moisture and avoid the wind. In keeping with its challenging environment, it grows VERY slowly in the alpine. By 25 years old, Moss Campion is still only 8” across. The oldest known Moss Campion is 350 years old but just 2’ in diameter. We found one on Plateau Mountain that was almost that big. It takes 10 years for the first flowers to appear on new plants. The plant in the photo to the right is less than 4″ in size but more than 10 years old. Try not to step on them, because a footprint can mean their death!

The flowers and the plant are either male or female, but both can decide to change from year to year. Flower gender frequency also changes with altitude; the higher you get, the more female flowers you get. The flowers also have a scent, but it’s only strong at night; it relies on night insects and birds for fertilization and spreading its seeds. 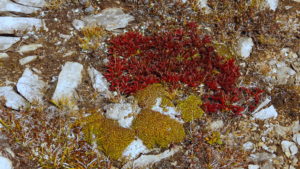 If a part of the plant dies, it will turn brown or white but stay as part of the cushion, as you can see in the photo to the right.

Although it looks like a moss, it is readily distinguished from mosses because mosses don’t flower.