It’s hard to miss a Moose, or not pay attention to them. If there’s one critter that commands your interest on the Spray Lakes Road around Mt. Engadine Lodge, it’s the Moose. 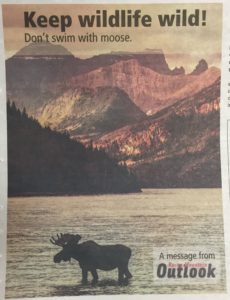 Big, aggressive and generally bad tempered, Moose are best seen from a distance, or from the safety of your car. Males normally weigh at least 1,000 lbs, and easily get up to 1,600 lbs. They are not a critter to be messed with, especially not one to accidently hit with your car, as they will do a lot of damage to anything. And the rutting season in the fall and early winter is an especially bad time to have a “close encounter”. Males with a full antler rack are large indeed and not to be bothered – not that the girls are any gentler, especially not when they have young with them. And we certainly wouldn’t swim with them, as was advertised in the Rocky Mountain Outlook as a public service message once. Seriously. 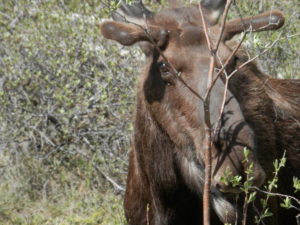 It’s hard to believe, but Moose get that big by being strict vegetarians. They can gobble up nearly 10,000 calories per day. They love willow and birch shoots, but their preference is water plants, which is why the Engadine/Smuts Creek Marshes are a common place to see them. There’s also mineral mud there that they like to eat. Other good spots include the wetlands in and around Goat Pond (like the photo to the right), near the Peter Lougheed Visitors Centre, near the Pocaterra trailhead, at Kananaskis Lakes Trail at the Upper Lake turnoff, at the Burstall Pass trailhead or anywhere else marshy. 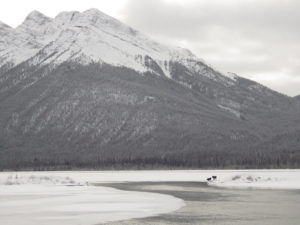 In the winter, it is common to have Moose licking salt off cars parked at Burstall Pass. They really are crepuscular. Mid-day Moose sightings are rare indeed – but we have spooked them out of the forest hiking the Rummel Pass trail in the early afternoon. They just nap or ruminate during the day.

There are a LOT of Moose around North America – almost a million of the Western Moose subspecies that we find here – but their numbers are in decline. 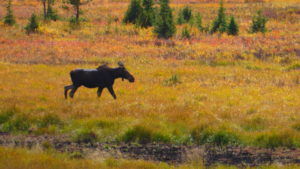 In the Bow corridor, Moose are very rare from the Vermillion Lakes down to the Kananaskis River/Bow confluence. All of this space looks like obvious Moose habitat, so what gives?

For various reasons, that space has an endemic population of Giant Liver Fluke. This nasty parasite is transmitted by elk, carried by deer, and is very bad news for moose who eat water plants. The Fluke has a complicated life cycle, but spends part of its life living in water snails that hang on the plants. Because elk are a carrier and propagator of the Fluke, and the Bow Valley has a lot of elk that are infected, the incidence of fluke in moose in the Bow Valley corridor is over 60%. Not a lot of moose mortality is directly associated with the fluke, but it weakens the animals so they are readily predated. 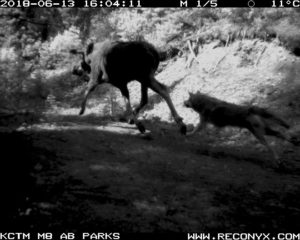 The liver fluke isn’t as prevalent elsewhere in K-Country, so Moose are more common outside of the Bow Valley corridor; the incidence of liver flukes in Moose in Peter Lougheed Provincial Park is only about 5%.

Adult Moose are mostly targeted by wolves, cougar and grizzly bears. It seems at least once a year, a bear gets a moose near Mt. Engadine Lodge. Alberta Environment and Parks’ Ecology research cameras caught a Moose being chased by a wolf pack in June 2018. Wolverine are mean enough to attack Moose of all sizes, and coyote will go after baby Moose.