Did you know we had not one, but TWO endangered trees in K-Country?

Yes, it’s possible to have endangered trees, and we have more than two in Canada. The two most worthy of note in K-Country are the closely related Limber Pine (Pinus flexilis) and Whitebark Pine (Pinus albicaulis). Both are listed as Endangered in Alberta under the Wildlife Act, but we’re not sure it has yet received protection under the Federal Species at Risk Act. To quote the Committee on the Status of Endangered Wildlife in Canada (COSEWIC) report regarding the Limber Pine:

This tree species is imminently and severely threatened throughout its Canadian range by White Pine Blister Rust (an introduced pathogen), Mountain Pine Beetle, and climate change. Surveys at a number of sites in 2009 document an average of 43% and 35% of infected or dead trees, respectively. Repeated survey information leads to an estimated decline in the Canadian population of about 1% per year. At that rate, close to 2/3 of mature individuals are expected to be lost over the next 100 years, and local subpopulations could become extirpated.

Where do you find Limber Pine?

In Canada, Limber Pine occurs typically on warm, dry sites in the lower portions of the mountains and foothills at elevations of between 850 m to 1,900 m. Some occurrences are as high as around 2,000 m and may form mixed stands with Whitebark Pine. Limber Pine can occur at both lower and upper treeline sites. Aspects are usually southerly or westerly and slopes vary from gentle to steep. In Alberta, some stands are in more gently rolling terrain as well as rocky ridges and outcrops. Limber Pine sites are often exposed to strong winds, which in conjunction with shallow, well to rapidly drained soils and warm aspects, create droughty conditions. Limber Pine is often the only tree species that can occupy steep, windswept headwater habitats and plays a key role in snow capture, mediating snow melt, and controlling erosion

Limber Pine is a long-lived species, frequently reaching several hundred years, and trees over 1,000 years old are known. Cones are typically produced starting at about 50 years of age, although this may be delayed, and the largest cone crops are produced decades later.

How do you identify a Limber Pine?

Limber and Whitebarks have a distinct feature that makes their identification easy: their needles are in clusters of 5. They generally live in different places (Limber low and Whitebark high up in “Larch Land”) but can overlap and coexist.

Mid-summer is the best time to tell the two 5-needle species apart, because a dead giveaway for the species is the cone. A Limber Pine’s are long (up to 20 cm), while a Whitebark’s are short (5-8 cm). While most young cones of any conifer are green, a Limber’s cone is light-brown to greenish-brown, while a Whitebark’s are dark brown to purple. In addition, Limber cones open naturally and fall to the ground. Only animals, most notably the Clark’s Nutcracker, can open Whitebark cones (Clark’s also eat and disperse Limber seeds), and they stay on the tree unless an animal knocks them off. So if you see a tree, look on the ground and the cones will tell you the type of tree.

Why are they endangered?

White Pine Blister Rust is killing both Limber and Whitebark Pines. Accidentally introduced from Eurasia, it was first identified in Canada in 1921, and made it to Alberta in 1952. Infection rates are now up to 60% of trees, and mortality is 50%, and both are increasing. Knock branches off the tree accidentally, or damage the bark by using the tree as a hand-hold, and you make pathways for the Rust’s spores to enter the tree. Brush against the Rust, then brush against a healthy tree, and you can transfer the Rust. In these ways and others, hikers & bikers can readily put a healthy tree at risk. If that weren’t bad enough, they’re also very susceptible to Pine Beetle, too, especially in a rust-weakened state.

Can I see one easily?

There are stands of Limber Pines on many of the eastern windswept hills in K-Country. 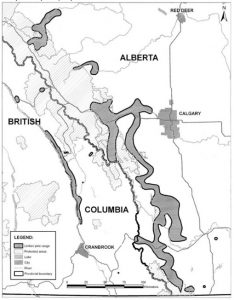 Look for the 5 needles and you’ll find them all over K-Country, especially in the Bow Valley Corridor, down the Kananaskis River Valley and in the eastern foothills. You can even buy one to grow in your yard from Bow Point Nursery, where they raise seedlings.

What is the Province doing to save them?

You can read Alberta’s Limber Pine Recovery Plan here. As an endangered tree, this is another thing that Parks Ecology keeps its eye on. They welcome reports of stands of any 5-needle pine tree – Limber or Whitebark – as they continue to inventory them to develop plans for their protection and recovery. There’s an app you can use to report 5-needle pines, but at this moment, it’s not available to the public. We’ll pass along to you when it is.

Read about some of the other fascinating plants of Kananaskis Country here!