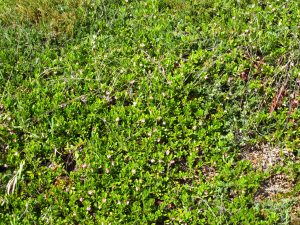 Evergreen, ground-covering mats of Kinnikinnik (Arctostaphylos uva-ursi) are everywhere in Kananaskis. While they prefer the montane slopes, they can be found in dark, drier areas all the way up to almost the high alpine.

The dark green oval leaves virtually cover the entire plant, hiding the woody stems underneath. Sometimes, the leaves will change colour a bit over the winter, ending up almost purple, but they seem to go back to green fairly quickly in the spring.

The flowers and berries 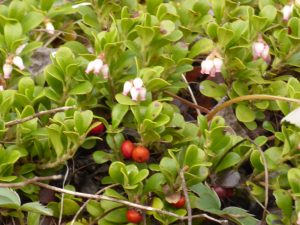 The plant flowers early, often in early April, and the tiny flowers stay on until late May. The flowers themselves are quite small and look like small bells, whitish with pink edges. These flowers eventually turn into small red berries that earn the plant the more common name of Bearberry. As you can see in the photo, it’s not uncommon to find this year’s flowers next to last year’s berries.

While the berries are very popular with birds (especially grouse) and other animals all year round, how appealing they are to bears depends on whom you talk to. Ben Gadd notes that bears seem to like the roots of the plants more than the berries. Many indigenous believe that bears only eat the berries when the bear’s feeling unwell. 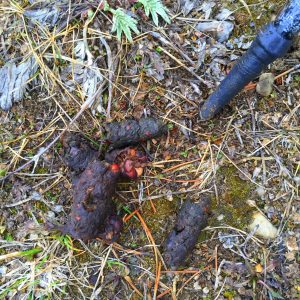 The berries will stay on the plant over the winter, and some sources claim that the sugar (and the flavour) of the berries improves after having been frozen all winter. Perhaps this is why they seem more common in early season bear scat. In that way, Bearberries may be an important food source straight out of denning. The photo of the bear scat at right was taken in late March; it’s full of Kinnikinnik berries.

Are they edible for us?

The berries are edible for humans, but are dry, mealy and mostly tasteless, and eating too many results in constipation. Pound them with Saskatoon berries and animal fat and you have the original pemmican. Indigenous peoples often cooked them mixed with grease or eggs; tea can be made from the berries and leaves, but too much tea results in stomach and liver problems. Strong tea was used to induce labour. 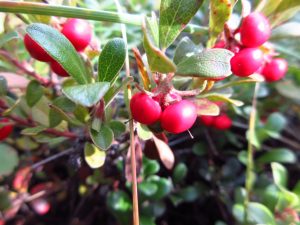 The word Kinnikinnick (note the different spelling) is Algonquin for “smoking mixture”; the dried leaves were used to cut tobacco or smoked on their own. They’re also high in tannin, and were used to tan hides. Various indigenous peoples used Bearberry to treat kidney diseases, turned the leaves into a salve for skin diseases, or for sore gums.