A bit of an editorial by Friends CoChair, Derek Ryder. First published in 2019.

Growing up in Ontario 50 years ago, I spent a lot of time in the wilderness, and some time volunteering with the Bruce Trail Association. The majority of the volunteering I did as a teenager was repairing the damage done by trail users, which included cleaning up the campsites and shelters that were along the trail then (they’re all gone now), fixing broken stiles and gates that crossed fences, collecting garbage, repainting damaged blazes and repairing trees that had initials carved in them. I guess that was the start for me of the concept of Leave No Trace.

I never understood why people couldn’t leave things the way they found them. I got the concept of accidentally dropping a bit of paper, but couldn’t understand folks who neatly collected their trash in plastic bags — only to leave the bags on the trail (much like dog poop bags today, which is a plague not just in K-Country but around the world as any Google search will show you). The whole idea that “if I carried it in, I could carry it out” seemed pretty intuitive to me. 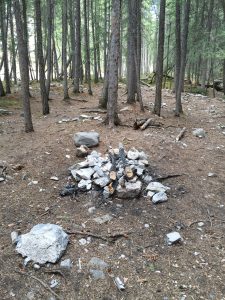 I wasn’t even a personal fan of fires in the wilderness, even when I went camping or backpacking. Ignoring the fact that it made my clothes smell, it always left ash or charred wood or blackened rocks, which was clear evidence that I had been there. SO many people have random fires in K-Country, especially up the creeks, and leave them as scars on the landscape — and many of those are illegal as well. The mess at left was one of THREE (illegal) fire pits within 50′ of this location. If you want to have a fire in a legal location, there’s ways to do it so that it has no impact, and tearing it apart when you’re done and scattering it is easy. If it’s too hot to handle, you haven’t put it out correctly. Leaving a fire ring for the “next person” to use isn’t leaving the wilderness as wilderness. 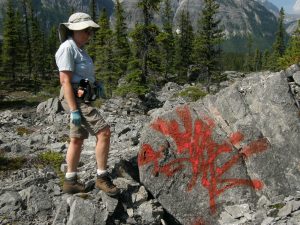 I used to think: “take only pictures, leave only footprints”. But I now understand that there are a lot of places where even leaving footprints is creating permanent scars on the landscape. And don’t get me started on graffiti; I work directly with Alberta Parks on the K-Country graffiti removal team. We have too much to do.

Leave No Trace Canada is a national non-profit organization dedicated to promoting and inspiring responsible outdoor recreation through education, research and partnerships. Leave No Trace builds awareness, appreciation and respect for our wildlands.

Many of us have taken a pine cone or rock, veered off the trail to dodge mud puddles, gotten too close to wildlife or tossed an apple core into the woods. While these actions may seem harmless at the time, until we learn to reduce our impact, the quality of our outdoor experiences and the recreational resources we enjoy are at critical risk. Also at risk is our continued access to wildlands as land management agencies sometimes take restrictive action to protect the resources they manage. Unless, of course, education catches up with behavior, and we all learn to leave the outdoors as unchanged as possible by our presence.

I have experienced land managers clawing back access first hand. As just one example, it is an annual occurrence for Bruce Trail private landowners to get tired of the mess users make (and I was cleaning up regularly back in the 1970’s), and revoke permission for the trail to cross their land, necessitating major trail re-routes. This is why there is no longer camping permitted virtually anywhere along the trail. 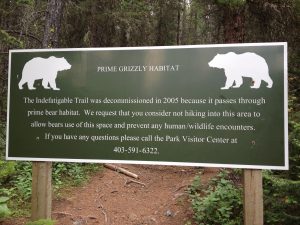 And you have experienced it, too. Mt. Indefatigable’s east ridge used to be an incredibly popular official hike complete with memorial benches. Now, there’s the sign posted at right (which went up in 2005). Research and collar data clearly shows that grizzlies forage in the summer and fall and den up there. For the sake of the grizzlies, the trail was decommissioned, and land mangers asked people to respect the trail closure. Has that stopped people going up there? Nope, not at all. Making arguments like “if the grizzlies were there, they would put an area closure in place” or “I’ll make sure we don’t disturb them” or “you could run into bears anywhere”, sadly many, many folks still use that trail (often, just to chase the ‘Gram photo). Read more about that topic here.

Another example was the closure of several sections of trail (including newly built trail) in the summer of 2018 in Bow Valley Wildland Provincial Park on the east bank of Cougar Creek in an area referred to as the Horseshoe Loop. The Friends has been heavily involved over the last 4 years working in partnership with various Land Managers and user groups to reduce trail density on the land in that area. Everyone — users and Land Managers alike — agree that the trail density in that area is too high. Research (that I help with) clearly shows the deleterious effect that trail density has had, and is having, on wildlife. In the end, however, the Land Managers have the final say of what happens on their land, and sometimes, actions to protect the land they manage will be taken unilaterally, often to the frustration of users who don’t understand how they contributed to the demise. 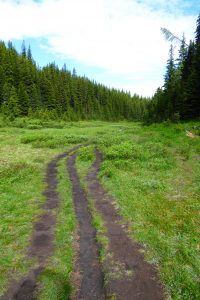 Many places in K-Country are under such pressures, especially those off the official trail network, and we at the Friends don’t see the trend of potentially increasing restrictive actions ending any time soon. 2020 has seen an explosion in use — and damage and garbage and graffiti and many other aspects of problematic, unsustainable behaviour, coincident with a pull-back in resourcing on Parks and Public Lands to do anything about it.

In this area, the work of the Friends is critical. We work to build and maintain sustainable trail systems, are at the table in the conversations regarding those Land Management actions, and we also have the potential to remind people of their obligations to help care for protected spaces and public land in K-Country. On various social media platforms, we are seeing a need for education as to why respect for the land and wildlife is essential. Our experience is that that most are willing to participate in the conversations, and willing to listen. Most want K-Country to be there a long time, and to let their kids and grandkids have the legacy of K-Country the way we/they experienced it.

Leave No Trace is the embodiment of “maintaining ecological integrity and recreational use” so they can be “enjoyed by future generations“, both of which are in our Mission and Vision. We think that ties to us pretty well.

In this series, we’re going to use Leave No Trace Canada’s 7 Principles of Leave No Trace to explore ways to minimize our impact as users of K-Country.