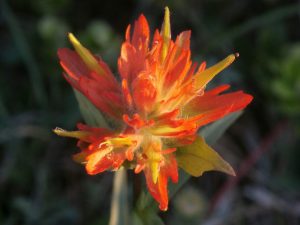 When summer fields are full of tall bright red flowers, you can be sure you’re looking at a sea of Indian Paintbrush (Castilleja). There are many subspecies of this flower. It is widespread and varieties can be found from the Andes to western North America to Asia and northwest Russia. The most common one here is the Giant Red indian paintbrush, Castilleja miniata, which ranges north to Alaska, south to New Mexico and east to Ontario. 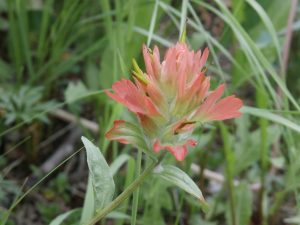 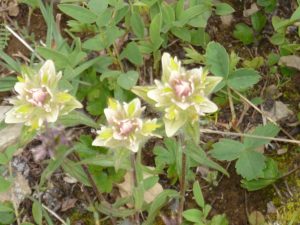 The red ones are the primary food for hummingbirds in the area. Some research suggests the two co-evolved. These flowers have almost no scent (hummingbirds are attracted to red colours, not aroma), a long deep flower that hides its nectar, and tough flowers that can withstand hummingbird bill stabs.

The other fascinating aspect of this plant is that it is parasitic. It attaches itself to the root systems of other plants in order to gain nutrients. The paintbrush will eventually kill off the host plant by destroying its root systems, then will die itself.

The flowers of Indian paintbrush are edible, but eat too many and they can kill you. The plant stores selenium from the soils it lives in, though more is concentrated in the leaves and roots than the flowers. Even the flowers have too much selenium for regular consumption.

See some of the other flowering plants of Kananaskis Country here!