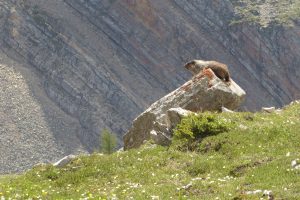 They are the stationary sentinels of the Rockies. They sit on rock perches, watching over the landscape, ruminating on life and you as you walk by. For they are Hoary Marmots, and, a more laid-back mountain critter is hard to find. These are not pikas, scurrying among the rocks in constant motion. These are not chickadees, that can’t sit still for a moment. No, marmots are not in a rush, and when you find them, they are dead easy to photograph, as in many cases, they just won’t move or change what you’re doing as a result of you being there.

There are two kinds of marmots in K-Country. Yellow Marmots can occasionally be seen deep in the south part, but the most common by far is the Hoary Marmot, who become more prevalent the farther north you go. Both are members of the rodent family, and their closest cousin is the woodchuck or groundhog. Being rodents, they chew endlessly, and a marmots diet consists of anything green growing in the high alpine, including lichens. That’s a lot of options, and by early September, marmots can get quite plump indeed. 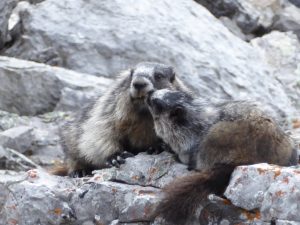 One thing Hoarys are known for is their call – an ear piercing whistle. This is commonly a warning call, and in a high alpine cirque, it travels a long way indeed. The thing they warn about most are Golden Eagles, who predate them by blasting in fast and low, a scene we witnessed in 2013 on a K-Country trail. Hoarys mate only once every 2 years, with a brood of 3-6 pups, who are almost adult sized by the time they go back into their burrows for the winter in mid- September. The Eagle we saw picked off a young of the year. Hoarys are also predated by Grizzlies, who dig up their burrows, and Wolverines, who can even dig them up in the winter when the Hoarys are hibernating. 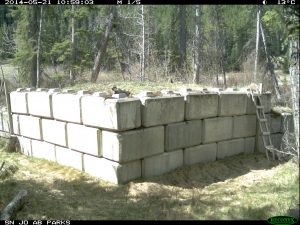 As noted, they live in burrows, often with neighbouring pikas in the rock fields they commonly share. They hibernate from mid-September to early May. The start of larch season is often hibernation time, so if you go to Sparrowhawk Tarns to see the larches, you probably won’t see marmots. Other good places to find them include Old Goat Glacier, Yamnuska, Old Baldy basin, and Buller Pass. And we’ve seen them crossing the Smith Dorien-Spray Trail near Buller Lake, AND Hwy 68 near Lusk Pass. Alberta Parks Ecology even caught one using an animal-jump out on the TransCanada Highway near Canmore, pictured at right. They may be denizens of the high alpine, but they get down low, too.

Meet some of the other fascinating Critters of Kananaskis Country here!