The beggars of the wilderness 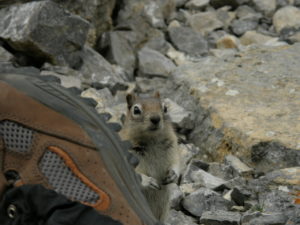 Ben Gadd calls them “the junk food junkies of the rodent world”, such is their love of begging handouts from passers-by. Too many people call them chipmunks. But the Golden Mantled Ground Squirrel, stripes and all, is a squirrel, not a member of the chipmunk family.

It is, however, a fearless fan of begging from humans. While this offers awesome photo opportunities, too many people also feed them, which is bad. We have had them try to get in our daypacks, and crawl over and up legs trying to get handouts. Be aware that not only do they bite, they can have fleas.

They are not chipmunks 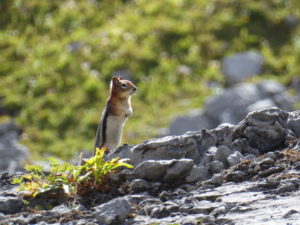 They are differentiated from chipmunks easily: chipmunk stripes pass through the face and eye, but the stripes of goldens stop at the shoulder. Probably confusing is that these gregarious little guys like to live in proximity to other rodents, notably chipmunks and pikas.

Unlike their pika neighbours, they do hibernate, though wake up regularly to eat and urinate in their burrows — though they drink nothing for 6 months. Like pikas, they get fluids from the grasses of their diets.

Home away from home

Their burrow is a little different than other ground squirrels. It lacks a dirt mound and basically is just a hole or two on the surface. It’s usually just 1-2 m deep and has only 2 or 3 chambers; one for sleeping, one for food storage, and a bathroom. The males arise in April, the females in May, breeding immediately. The newborn kits are grown and leave home by August.

What they should eat (and who eats them) 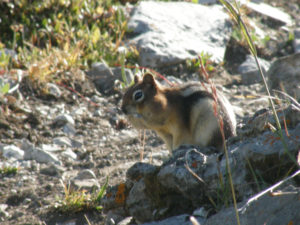 When not eating food begged from you, they eat grasses, flowers, fruits, berries and seeds, plus underground stuff like roots and fungi (note that potato chips, cheezies and bread are not on the list). They often stuff their cheek pouches full of food, as you can see in the photo to the right.

Being plentiful, they are predated by most any carnivore with 4 legs bigger than them (including weasels and fox), plus birds, from owls to eagles. To that end, they are an important link in the K-Country food chain.

Meet more of the Critters of K-Country here!