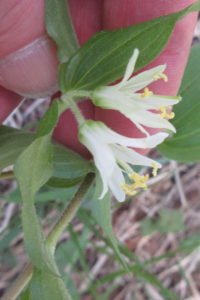 You usually can’t miss the obvious red berries of the Fairybell, Prosartes trachycarpa. The berries are far more noticeable than the small, subtle flowers (pictured at right) that precede the berries.

Our Fairybells used to be considered part of the Disporum family (and used to be called Disporum trachycarpum). But the botanists in the know decided that Disporum were native to Asia from northern India to Japan, south to Indonesia and north into the Russian Far East. Accordingly, they split out the 5 North American species of Fairybells and gave them a new family, Prosartes.

The primary Fairybell species here is the Rough-Fruited. One look at those little red berries will tell you that is an apt name. We think they’re more velvety than rough, however. You can find these Fairybells all across the boreal forest in Canada, and in mountainous regions of the US south to the Mexican border. The marble-sized berries, which come in clusters of 1, 2 and 3, stay on the plant into late September. They like to grow in shady, damp montane forests, of which K-Country has a lot.

The berries of Fairybells are supposedly edible, but flavourless. Indigenous people believed them to be poisonous and did not eat them. They are, however, popular with Grouse and various rodents and squirrels.

See more of the pretty flowers of K-Country here!