There are 7 land classifications within the Alberta Parks system, 5 of which you can find in Kananaskis Country: Ecological Reserves (Plateau Mountain), Natural Areas (Ole Buck Mountain), Wildland Provincial Parks (like Bow Valley), Provincial Parks (like Spray Valley), and Provincial Recreation Areas (“PRAs”). There are over 60 PRAs in K-Country. You can read here about Heart Creek PRA providing more background on the way PRAs are regulated and managed. The largest PRA of them all in Kananaskis is Evan-Thomas Provincial Recreation Area (“ETPRA”).

Just what is a PRA?

A PRA is also a park just like a Provincial Park, which are administered under the Provincial Parks Act. Accordingly, it’s easiest to think of a PRA as just a specifically designated Provincial Park. PRAs are generally small and encompass specific locations of more intensive recreational activity. But Evan-Thomas PRA is large; it is, at 2,571 Ha (about 10 square miles), the 6th largest PRA in the Province.

ETPRA’s name comes from the fact that it sits at the confluence of Evan-Thomas Creek with the Kananaskis River. The creek (and the mountain it sources from) was named after Rear Admiral Sir Hugh Evan-Thomas. He served in the First World War and fought at the battle of Jutland in 1916. Read more about him here. 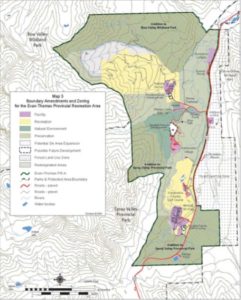 ETPRA was envisaged in the K-Country master planning process as the core node for the provision of commercial/recreational tourism in Kananaskis. As noted on the page about Heart Creek, PRAs are managed to achieve conservation and preservation, but to also strike a balance between that protection and recreational use – always a challenging thing to do. There is a lengthy list of facilities in ETPRA, including privately owned facilities on leased land… 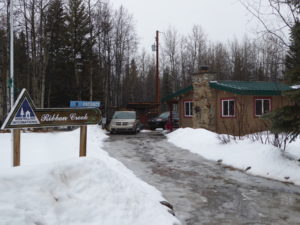 …government owned facilities contracted out to the private sector… 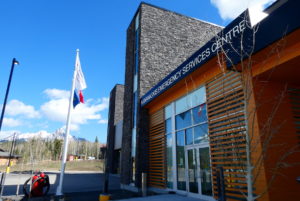 …and government owned and operated facilities like the Kananaskis Emergency Services building. This category also includes a number of official recreation facilities, including:

Wedge Pond used to be in ETPRA but is now in Spray Valley Provincial Park. Boundary Ranch is not in ETPRA, but in that small strip of Public Land east of ETPRA.

There are about 64 km of official trails in the PRA, including: 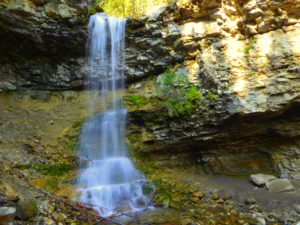 In 2004, there were almost 1.25 million day use visits per year to all of the above listed facilities. It’s a popular place to base yourself for recreational activities, which was its intent. Still, there are areas in the PRA designated as Natural Environment and Preservation zones (the significance of which we explain on the page on Spray Valley Provincial Park).

Home for Critters, too 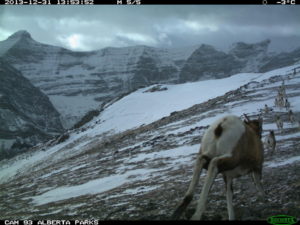 There are seasonal closures in place in some areas of the PRA; notably the Mt. Allan/Centennial Ridge trail and the Stoney trail, both in place to protect winter feeding and calving grounds for sheep and elk respectively. The PRA is home to K-Country’s largest sheep herd up on Mt. Allan. It was monitored for several years using wildlife cameras. The photo at right from 2013 shows a sheep herd in a hurry; the next picture was wolves chasing them. A significant elk herd hangs out in the meadows in the valley bottom. 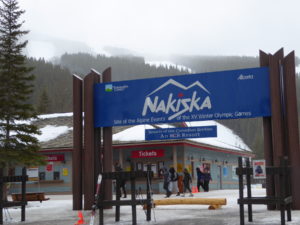 Wolves and bears of both types like the slopes of Mt. Allan, and grizzlies, elk and deer often feed on the Nakiska slopes. That is why the Management Plan does not permit summer use of those slopes for things like mountain biking, though the Management Plan is open to lift-assisted viewing. Weddings are one example of the kinds of activity for which lifts will run in the summer, and summer weddings at Nakiska are popular.

There was provision made in the 2004 PRA management plan for a potential expansion of Nakiska should visitor demand prove it needed, and environmental and social impacts were acceptable. A few years ago, Nakiska expanded into that designated space, creating the new runs in the area called “The Monster Glades”.

Human use of ETPRA goes back about 8,000 years, and numerous prehistoric sites were found along the Highway 40 right of way during its construction. Aboriginal people from as far away as Idaho and central and coastal British Columbia are known to have used and lived in the valley. Since their arrival in the area in the 1600’s, the Stoney people have used places like Mt. Kidd and Wedge Mountain as cultural and vision quest sites.

Logging and fires in the PRA

Sections of ETPRA were logged starting as early as 1886, and other areas burned by natural fires. Data back to 1783 demonstrates that fires sweep through the valley on average every 150 years, and almost everything in ETPRA has burned at least once since 1883. The great Galatea fire of 1936, which burned 8,426 ha, effectively put an end to commercial logging as it burned a significant portion of the commercial timber in ETPRA.

A controlled burn of the Kovach meadows to improve wildlife habitat was completed in 2019. The burn executed a few years back on the slopes of Mt. McDougall just southeast of ETPRA down Evan-Thomas creek was done in part to create habitat to attract elk out of the ETPRA’s facility areas. Interestingly, man-made forest openings (including the ski runs) constitute only 5% of the PRA.

The slopes of Mt. Allan and Mt. Collembola in the Marmot Basin have been used in the past for various research purposes, and some of that continues today. Starting in the late 1940’s, and continuing in the 1960’s and 70’s, the Canadian Forest Service ran experiments to see the impact of different types of logging practices on the watershed. There were various experiments of the impact of forest thinning and of clearcutting. 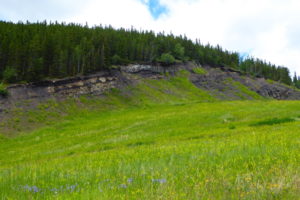 ETPRA was also home to coal mining, which ran from 1947 to 1952. Coal was discovered there in 1907. Before the 2013 flood, still visible were significant ruins of the mining town of Kovach that was situated near the Ribbon Creek parking lot. The reclaimed mine is still visible on Mt. Allan; the reclaimed face is pictured at right. It can be visited on the Coal Mine trail. Before the mine was mechanized, horses were used for hauling, and they grazed in what is now called Hay Meadows. 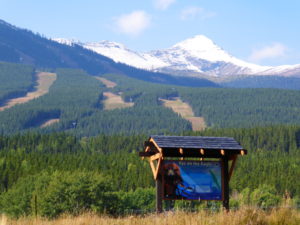 Hay Meadows is today the base of operations for monitoring the annual migration of the golden eagles which is currently underway; the site they use is the top photo. Click here to see the daily report and bird counts.

Because of the commercial activities in ETPRA, people live there. There are two residential areas with “right to reside” designations and restrictions, one by the golf course and one at Mt. Kidd RV Park. There is also staff accommodation up at the Pomeroy Kananaskis Lodge.

Hunting in a PRA?

It is very unique for hunting to be permitted in any PRA, but it is allowed in ETPRA in a small zone in the northwest corner. Anyone wishing to take advantage of the hunting opportunities in ETPRA should check the hunting regulations first. Fishing opportunities in ETPRA are limited and really only in the Kananaskis River – which isn’t particularly good for fishing due to fluctuating river levels. Pre-flood, many brook trout made their homes in the ponds on the golf course. Always check the regulations before casting out that line.

Random camping is not permitted in ETPRA (or any other PRA). Fires are not permitted except in designated pits (primarily in campgrounds). But why would you want to random camp when you can use the incredible facilities at Mt. Kidd, which includes tennis courts, volleyball courts, a hot tub and a wading pool?

Find out more about other elements of K-Country here!