Elbow-Sheep Wildland Provincial Park (“ESWPP”) is the largest protected area, and the second largest segment of land, in Kananaskis Country. At ~800 square kilometers, it is smaller only to the massive 1,100 sq. km. of the Kananaskis Country Public Land Use Zone.

ESWPP occupies most of the space east of Hwy 40 and west of any road accesses on the east side of K-Country. Its most northerly point is on Highway 40 at Barrier Bluffs, across from Barrier Lake Day Use Area. Its most southerly point is also on Hwy 40, 80 km farther south at Lineham Creek PRA. The western boundary runs along Hwy 40 for about 1.5 km between the Fortress Gas Station and Grizzly Creek, plus swings around to the continental divide for a short distance south of Peter Lougheed Provincial Park. The eastern boundary basically runs along the southern expression of the McConnell thrust fault. 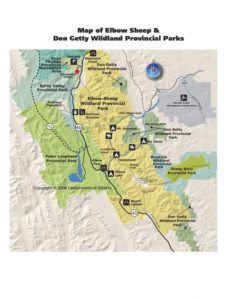 The map to the right shows the park, and its relationship in location to Don Getty and Bluerock Wildland Provincial Parks, plus Peter Lougheed and Spray Valley Provincial Parks, all of which border it. It is also bordered by the Kananaskis PLUZ on its east and south sides.

There is one hole in the park: the Burns Property, which we explain here. Other than that, it is one unbroken contiguous landscape. Since ESWPP was created, it has seen only a few minor boundary modifications, notably in the northwest corner.

When and why was ESWPP created?

ESWPP came into being in 1996 with Order in Council 11/96 which you can see here. It was created as an outcome of a Provincial Government process that started in the early 1990’s called “Special Places 2000”. The goal of that process was to implement protections for lands representing the province’s 6 natural regions by the year 2000.

Part of the Special Places 2000 process created the then-new designation of “Wildland Provincial Park”. The intent of a Wildland Park is to:

Retain large areas of undeveloped land in a natural state by minimizing facility development and interference with natural processes. This kind of park allows for a variety of backcountry recreation opportunities such as hunting, fishing, trail riding, and backcountry camping and hiking. Snowmobiling and off-highway vehicle use is not allowed in wildland provincial parks except on previously approved/designated OHV trails or routes. Wildland parks provide areas that support backcountry tourism in Alberta, such as the guiding and outfitting industry, and commercial trail riding.

In addition to other things, ESWPP protects:

Before becoming a park, there was industrial activity in some areas of what is now the park. The most obvious is coal mining in the northern and southern sections of the park. 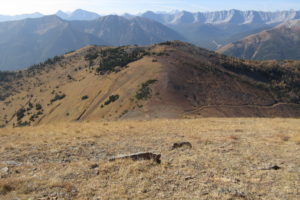 As we note on the page about the Burns property, there are coal deposits in that area. The Mist Creek trail is an old exploration road that turns up and accesses Mist Ridge, plus splits off and climbs the South Mist Hills as well. A small area had coal mined on the west hill of the South Mist Hills. The mine scar wasn’t really reclaimed, and is still fairly obvious. You can see the former access road in the picture to the right. The mine pit is the half-moon shaped cut below the summit of the west hill. There was also a small pit mine at the road’s terminus on Mist Ridge as well, but not much evidence of the mine remains.

Pre-several floods, George Pocaterra built a road up Evan-Thomas creek also looking for coal. He found it – lots of it – in the Camp Creek area, and he tried to develop it to no avail. That road eventually became a fire road.  Maintenance of that ended with the increasing use of helicopters of the 1990’s. The 2013 flood also took out any section near water and all the bridges.

In addition, as noted on the Burns page, range cattle ran in the Sheep Valley until the 1970’s.

Despite the park’s massive size, there are only 5 designated trails in it:

Unofficial routes in the park

You would guess that such a large park with so few official trails would get a lot of routes, and you would be correct (to understand the difference between an official trail and an unofficial route, click here). Just some of the more popular unofficial routes in ESWPP include (generally from north to south):

In 2017, with the support of Friends volunteers, Lantern Creek trail received maintenance and upgrades by Parks staff as if it were designated. Despite this, it is still only a route. It is the only undesignated route the Friends has ever worked on.

How about mountain biking?

Provincial Parks General Regulation 27(2) prohibits cycling in ANY park except on trails designated for cycling and identified by signage as such. In practice, Parks specifically posts trails where bikes are not permitted and generally allows them elsewhere. In ESWPP, mountain biking is specifically permitted on the official trails. Of note:

Essentially none of the long list of unofficial routes in ESWPP noted above are viable for mountain biking, though stories abound of people trying.

What about horseback riding?

ESWPP is very popular with both horseback riders and outfitters. Commercial rides leaving from the Boundary Ranch are available. They mostly go up the Evan-Thomas Creek, and they have semi-permanent camps up there. Horse parties are common on the Big Elbow-Little Elbow loop. Horses used to be common on the Sheep Trail, but less so since the 2013 flood destroyed the trail. Now, horse parties use the Mist Creek trail to access the Sheep Valley, and even ride up Mist Ridge. Horses are also common in the Picklejar Creek area.

There are two designated backcountry camping sites in ESWPP, Romulus and Tombstone. However, each has a regular backcountry campground and an equestrian one, so technically, ESWPP has 4 campgrounds. Big Elbow campground is not in ESWPP (and is its own Provincial Recreation Area anyway). Both Romulus and Tombstone have pit toilets, tables, designated sites and hitching rails for horses. Fires are permitted at both, and there are fire rings (and usually firewood as well). Tombstone was upgraded in 2021. 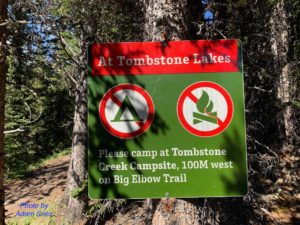 In addition, you can random camp anywhere in the park, so long as you are more than 1 km away from a facility such as a road or campground, and 1 km away from the boundary of a Provincial Park. Read all about random camping in K-Country here. Popular random camping locations in the park include up Evan Thomas Creek valley, Picklejar Lakes, Sheep Lakes, Rae Lake, in the Mist Ridge & Creek area, and by Junction Lake. The one place where random camping is prohibited in the ESWPP is at Tombstone Lakes.

You are permitted to burn deadfall in your random campsite. However, deadfall does not include standing dead, and nor can you cut down live trees. 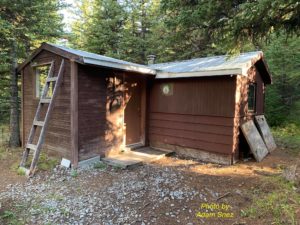 Alberta Parks maintains a patrol cabin near the Tombstone campground. Alberta Fish and Wildlife (kind of) maintains their own patrol cabin not that far away at the Sheep Lakes (pictured at right). That location also has a permanent metal horse corral for their use, as well as the use of the riding outfitters that built it for them. We’re not exactly sure if these cabins constitute “facilities” that you must stay 1 km away from if random camping, but we would assume so to be on the safe side.

Only in a Wildland Park

Snowmobiling is permitted on the Big Elbow-Little Elbow Loop from January 1 through March 31 annually. This is part because of their pre-park designation as a Public Land Recreation Trail. You can read more about those here. The access for this loop is either from McLean Creek, or the Dawson Trailhead on Powderface Trail. 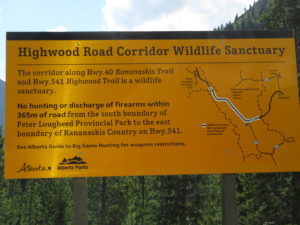 Being a Wildland Park, hunting is permitted and it is very, very popular in ESWPP. In the fall, elk hunters commonly use the areas along Hwy 40 in the Wasootch and Mt. Lorette Ponds areas, as well as in readily accessed ESWPP areas proximal to Galatea and the Fortress Gas Station. Boundary Ranch leads commercial hunts for sheep, cougar, elk and deer up Evan-Thomas creek. Hunters are also very active hunting sheep, elk, moose and black bears in the Mist and Picklejar areas, as well as in Nihahi Creek. Note that the Highwood area of Hwy 40 is a designated wildlife corridor. No hunting is permitted within 365 m of the road south of PLPP.

There are active traplines in the park, and trappers are allowed to use snowmobiles to access their traplines.

We’re not going to tell you it’s here

One of the most unique aspects of ESWPP is that the 1998 Management Plan  states:

No directional signs indicating the name of the (park) will be placed along highways leading to the park. “Wildland Park” boundary signs will be placed by the Department where needed on the perimeter. 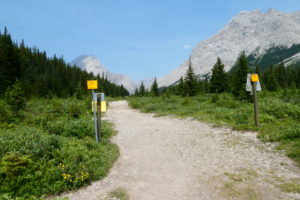 At this time, true to their word, we’re not aware of a single sign, on any road or trail, that says “Elbow-Sheep Wildland Provincial Park”. Practically speaking, there are only a few places on Hwy 40 where those signs would be useful anyway. Signs at the boundaries say “Wildland Park Boundary” on one side, and “Provincial Park Boundary” on the other. The photo at right is the ESWPP/PLPP boundary on the Big Elbow Trail just east of Elbow Lake.

What other rules are in place?

You can’t land or take off aircraft in the park, so no heli-hiking. Fireworks (including sparklers) are not permitted. Under Park Regulation 15(1) dogs must be on a leash less than 2 m long, and you must remove your dog’s excrement. Regulations 17 & 18 gives CO’s the right to take your dog if it is not under your control. You can’t build a permanent structure in a Wildland Park, so no making your own “cabin in the wilderness”.

This giant park is serviced by just TWO day-use areas: Wasootch and Mt Lipset, which are nearly 70 km apart. Mt. Lipsett is just a picnic area; there are no trails or routes leading from it (the route up Mt. Lipsett starts almost 10 km farther south down Hwy 40).

Find out more about some other elements of K-Country here.